Merlo’s TF65.9 telehandler has arrived in the U.S. for heavy-duty material handling operations.

Despite the heavy capacity, the telehandler maintains compact dimensions for jobsite maneuverability of 17 feet 3 inches long, 7 feet 10 inches wide and 8 feet 2 inches tall. It has a 14-foot-11 turning radius.

The FOPS Level II and ROPS cab has 463 square feet of glass for 360-degree visibility. Air conditioning and heat are standard, with air flow designed to be evenly distributed in the cab.

Merlo reduced cab vibrations by mounting the cab on blocks with hydro-pneumatic suspension, which the operator can turn on and off. “It drastically reduces vibrations inside the cab and facilitates the absorption of the stress and vibrations transmitted during the transfer and work phases, even on uneven ground,” the company says.

The telehandler also comes with Merlo’s new “ergonomic auto-revving joystick.” The company says it reduces operator fatigue and helps increase productivity with its connection to the high-flow hydraulic pump.

The four-wheel-drive TF65.9 runs on a 170-horsepower FTP engine and can travel up to 25 mph. Eco Power Drive automatically adjusts engine speed based on operating conditions, reducing fuel consumption by as much as 18%, the company says. The telehandler has three steering modes.

The operator can use the frame leveling feature to level the chassis on slopes as steep as 8 degrees. Ground clearance is 1.5 feet. The new Adaptive Stability Control System furthers safety by continuously checking the telehandler’s operating parameters in real time to prevent overload or other safety issues, the company says.

Equipment from Merlo, which is based in Italy, is imported and distributed in the U.S. by Applied Machinery Sales (AMS) based in Rock Hill, South Carolina. 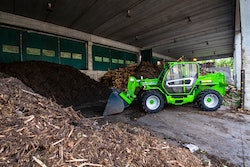 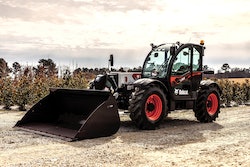 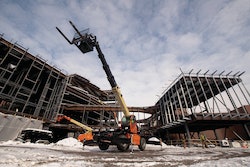 Drop the Outriggers and Work for Hours: JLG Rotating Telehandlers Give You 3-in-1 Capability