Slipform pavers spread out, form and, depending on attachments, apply an initial finish to the surface of low-slump Portland cement concrete (PCC).

The paver is pulled over the PCC, slipping over the material, hence the name. The process is similar to extrusion, but instead of the material moving, the machine itself is moving.

PCC running through a slipform paver passes through an auger spreader, a spreader plower, strike-off plate, vibrators and or tampers and a conforming plate. It then goes through the finishing screed, which produces the final shape, followed by a float or hand finishing.

Paving in this manner also requires a steady supply of material be available. As with asphalt paving, an inconsistent pace, including stops, along a planned straight run of pavement will create noticeable mars on the surface. Therefore, it’s important to keep a consistent head of material in the machine and  to coordinate truck delivery and operations at the mix site.

Mix design and weather conditions also affect the quality of the pavement. Low humidity, high heat and high winds can dry out the PCC, which requires a delicate balance between workability and firmness. If the mix dries out, it loses workability and no manner of operational expertise will be able to improve the pavement.

“Slight variations in aggregate and moisture conditions can cause problems,” says David Howrey, president of Howrey Construction in Rockwell City, Iowa. His firm is a recent winner of a 2015 Concrete Paving Award from the Iowa Concrete Paving Association (ICPA). The awards recognize projects that are evaluated on several factors, including smoothness.

“A perfect mix design on paper is easy,” Howrey says, “but getting that perfect mix design out of the mixer and through the paver and to have it act consistent is another matter. Just a slight variation of the moisture content can make it act differently.”

Howrey says he’s witnessed contractors who work as if they believe the paver should be able to create perfect results in any condition.

“In a job done this past year, we had a dirt contractor get into the concrete pavement business and he had an inexperienced guy running the paver. It was 95 degrees and he didn’t understand why he was having issues. He was having nightmares over the project because the machine wasn’t doing what he thought it should be doing. Every minute the concrete sits in those conditions, it’s hydrating.”

Steve Jackson, president of Cedar Valley Corporation in Waterloo, Iowa, agrees with Howrey on the weather issue, as his staff lists it at the top of their challenges. Cedar Valley is consistently recognized for its quality concrete pavements, winning five awards from the ICPA’s 2015 round of recognition, and a Gold Award from the American Concrete Pavement Association’s 2015 Excellence in Concrete Pavements awards.

Mix design and concrete consistency also is a top concern, but Jackson adds that poor design may be a bigger problem when it comes to smoothness.

“Everyone wants pavement that is as smooth as a glass table top,” he says. “If the geometry of the pavement design has built roughness into the pavement, a slipform paver can’t remove it.”

Design is just one part of the preparation aspect of slipform paving. Jackson says his staff believes a major contributor to top-notch concrete pavements is the quality of the workforce.

“The constant theme they gave me is that superior pavement smoothness comes from attention to detail and employing quality people who care about the job they are doing,” he says. “While quality equipment is absolutely essential to getting quality pavements, quality people seem to be the top factor.”

Cedar Valley says the top factors contributing to quality include:

“I think the equipment manufacturers are doing a fantastic job designing and producing quality equipment capable of meeting the challenges of paving superior, smooth pavements,” Jackson says. However, he believes one of the biggest challenges faced by the concrete industry is attracting and keeping a qualified workforce that wants to be engaged and proud of their work.

He also believes consistent transportation funding to be key to maintaining consistent quality pavements. “We need to have funding mechanisms in place to have enough work for our industry to allow businesses to have a consistent workload, which will allow us to keep our trained staff and purchase quality equipment.”

While contractors know experienced and well-trained crews are the key to their success, they also realize the capabilities and advancements of slipform pavers must be at a matching level. Much of the more recent changes and updates to these machines have focused on the control systems.

Wirtgen America says its design concept has focused on sourcing high-quality vendor hydraulics, such as using aviation-grade systems in addition to electronic components. “These, in combination with the intelligence of our WI-Control operating system, which is custom-made for slipform pavers, ties it all together,” says Tim Nash, director, concrete products.

Nash says with slipform pavers there are numerous variables that come together to create optimum equipment design: “We focus on frame design and weight, in addition to mold design and control systems.”

“The use of 3D guidance and smart accessories, paver speed, instant feedback, and the ability to adjust the sensitivity of the paver elevation controls all play a key role in creating a smoother pavement,” Peters says.

Peters says the controller area network system on Power Paver machines allows for nearly instantaneous reaction to information they collect. “This allows for a much more accurate feedback, which helps create a smooth surface.”

“The paver structure and controls themselves are rock solid, and anything that can adversely affect smoothness has been addressed, so the operator doesn’t have to deal with it,” says David Lipari, Guntert & Zimmerman marketing manager.   Visibility on G&Z machines has been adjusted to allow the operator to better monitor the concrete head of material height. “Concrete head height control is an important part of achieving smooth pavements,” Lipari says. “The machine is easy to set-up for paving, and our controls are designed to be intuitive and easy to learn.”

Chad Harrison, chief engineer-mobile products for CMI Roadbuilding, says because continuous paving is a major contributor to pavement smoothness, operation of the equipment shouldn’t be complicated. “A key part of CMI’s ‘macro’ view on the entire paving operation is to use technology to simplify the equipment for the operator and improve reliability,” he says. To do so, the company has added bright, large screens to provide more visible feedback to the operator and to make machine control easier.

CMI has incorporated what it calls the “strong box” paving kit idea, which originated with its SF-2 paver, to its entire slipform paving line in order to reduce deflection during paving. “The CMI Series ‘6’ kit utilizes a rigid box construction that creates a paving kit that is more than 50 percent stiffer than a traditional hanger and pan style with no deflection during paving,” says Mike Rodriguez, CMI regional business manager.

In the past few years, research under the second Strategic Highway Research Program (SHRP2) has examined how to determine the smoothness of concrete pavements in real time by analyzing the profile of the pavement while it is still wet and in plastic phase. Contractors can use instantaneous feedback to make adjustments as needed to the wet concrete, rather than having go back later and grind down the pavement to meet smoothness specifications.

Two prominent pieces of equipment used in the testing included the GOMACO Smoothness Indicator (GSI) and the Ames Engineering Real Time Profiler (RTP). The GSI’s two sonic sensors and one slope sensor can be attached to paving equipment or attached to a standalone machine, and measure international roughness index (IRI) and profile index (PI). It was tested in Arkansas and Michigan. The RTP mounts directly on the paver and uses a laser to determine IRI and PI, and has a bump/localized roughness detection system. It was tested in Texas, Michigan and New York

Controls will continue to be a focus of slipform paver design and operation to create smooth pavements in the near future, manufactures say, along with advances in concrete mixes and specifications.

“Even though stringless controls have been around a long time, they are still in their infancy when it comes to solving age-old challenges inherent to stringline being set in cords,” Lipari says. “This, in conjunction with higher quality concrete being used in concrete paving, is going to be the driver that make concrete pavements smoother than ever.”

“Roadbuilding specs are continually being adjusted to closer tolerances and tighter specifications, which pushes us to continually refine our products,” says Peters. “We are constantly trying to overcome the jobsite challenges our customers face.” 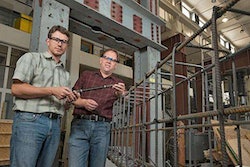 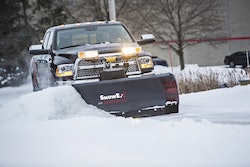