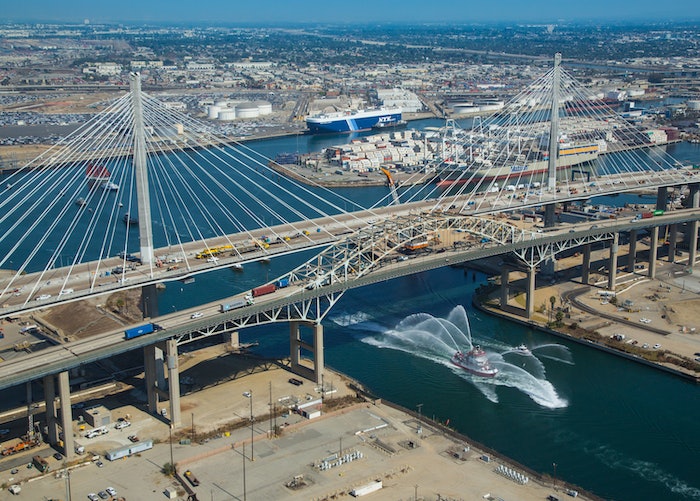 The new bridge for the Port of Long Beach in California is the second-tallest cable-stayed bridge in the country. It opened in October during a virtual ceremony and will replace the Gerald Desmond Bridge.
Photo credit: Port of Long Beach

As the overall U.S. infrastructure grade rose over the past four years, roads lagged behind, and bridges saw a drop in score.

Road conditions across the country rated a “D” in the 2021 Infrastructure Report Card by the American Society of Civil Engineers released March 3. That marks no improvement from the last report card in 2017.

“Forty percent of the roads in the United States are in poor or fair condition,” said Maria Lehman, ASCE report card committee member. “And some of them are local roads, not all interstates.”

She said the average motorist spends $1,000 a year on wasted time, fuel and repairs because of deteriorating road conditions and congestion. She also noted that pedestrian deaths have risen 60% over the past 10 years.

“It’s not just about quality, it’s about safety,” she said.

Bridges fared somewhat better on the report card, rating a “C.” However, that represents a drop from 2017’s C-plus.

She noted that progress has been made on slightly lowering the percentage of bridges rated poor; however, more bridges are moving from good to fair condition.

“There are 178 million crossings a day on structurally deficient bridges,” she said. “When you consider how much we're investing in our bridges right now, it would take us to 2071 to catch up with the repairs and replacements we need for today's conditions. What about all the deterioration that happens in the next 50 years?”

“Unfortunately, though, this means, on average, our infrastructure is still in mediocre condition and requires attention,” said Kristina Swallow, Nevada Department of Transportation director and ASCE report card committee chair.

She reported a funding shortfall that has risen to $2.6 trillion. “Our chronic underinvestment in infrastructure is having real world impacts for American families and businesses. The average household will lose $3,300 a year over the next 20 years due to underperforming infrastructure.”

To continue to raise the country’s infrastructure grade will require more innovative, cost-effective infrastructure that can withstand severe weather. She also called on new funding based on user fees. “We need user rates and fees to reflect the true cost of using, maintaining and improving our systems and assets.”

Here's a breakdown of how each sector, other than roads and bridges, was graded in the ASCE Report Card for America's Infrastructure and how they compared to the last report card in 2017:

Transit – D-minus, the same grade as in 2017. “Unfortunately, 45% of Americans have no access to transit,” said Michael Schipper, report card committee member. “Meanwhile, our transit assets continue to age and fall into a state of poor repair. Many transit agencies lack sufficient funding to do basic maintenance.” He reported an investment backlog of $176 billion that continues to grow. “This hurts the economy, increases congestion and limits access to jobs for people who need this access the most.”

Dams and levees – D, no change. The country has 2,300 high-hazard dams in need of upgrades and repairs, said Del Shannon, report card committee member. With population growth, many of these dams that were in remote rural areas are now heavily populated. “This dramatically increases the risk of significant property damage and even the potential for loss of life if a dam failure occurs,” he said. The nation’s 30,000 miles of documented levees and estimated 10,000 miles of undocumented levees are in similar shape. “As we build homes, businesses and schools in areas that rely on the safe performance of these levees, the consequences of the levees failing during a flood only continues to increase,” he said.

Stormwater – D. This is the first year for this category. Increases in impervious surfaces in cities and suburbs are leading to more flooding and to runoff pollution into waterways. “Nearly 600,000 miles of streams and rivers are considered impaired, yet more than 70% of communities do not have a dedicated funding source, such as a stormwater utility, to address these needs,” said Rebecca Shelton, co-vice chair of the report card committee. She said the sector faces an annual funding gap of $8 billion a year. “Weather patterns are changing, and systems are aging, causing communities to struggle to adapt.”

Hazardous waste – D-plus, no change. “There are about 1,300 Superfund sites in the United States where cleanup activities are either incomplete or not yet begun,” said Mike Tilchin, report card committee member. “That's roughly the same number as four years ago.” Funding for the EPA’s Superfund program, which addresses some of the most contaminated sites, has remained flat. “Climate change is only going to make hazardous-waste site remediation more challenging,” he said. “If we don't prioritize investment in hazardous-waste site cleanup, we're going to live with these sites as a continuing threat for generations.”

Wastewater – D-plus, no change. The country has 16,000 wastewater treatment plants, and 15% have reached or exceeded their capacity. “Large-scale capital improvements to systems experiencing sanitary sewer overflows have slowed in recent years,” Shelton said. “And as many treatment plants and collection networks approach the end of their lifespans, operation maintenance and replacement will become more costly.”

Aviation – D-plus, up from D. There have been some slight increases in public and private spending on aviation infrastructure. “However, the nation's airports face growing capacity challenges,” said Jennifer Belknap Williamson, report card committee member. “And although passenger volumes are down today, when they return, the current terminal space and gate availability will be strained again.” She noted that prior to the pandemic, it was projected that the aviation system faced a 10-year, $111 billion shortfall in funding. That amount has likely increased during the past year.

Inland waterways – D-plus, up from D. The country’s inland waterways consist of 12,000 miles of navigable waters with barges carrying agricultural, petroleum and other bulk goods. Shippers experienced 5,000 hours of delays between 2015 and 2019, said Bill Stahlman, report card committee member. “Many of the locks and dams on our inland waterways were built in the ’30s and ’40s and are long overdue for repairs.”

Parks – D-plus, no change. Despite their popularity, investment in park infrastructure, such as trails, bridges and water and sewer systems, is lagging, Purasinghe said. “State parks face a $5.6 billion deferred-maintenance backlog, and local parks face a backlog more than 10 times bigger, estimated at over $60 billion,” he said.

Drinking water – C-minus, up from D. A water main break occurs every 2 minutes, and enough treated water is lost to fill 9,000 swimming pools a day, said Darren Olson, report card committee co-vice chair. On the positive side, federal financing programs and utilities have helped add 12,000 miles of new pipe each year. New technologies to detect leaks are also helping. Despite that, he added, “there is much to do to make sure that drinking water is actually affordable and safe for everyone and to build a more resilient water infrastructure that can withstand climate change.”

Energy – C-minus, up from D-plus. Annual spending on high-voltage lines and distribution systems is increasing, but reliability is still a concern, said Otto Lynch, report card committee member. “Our electric transmission grid infrastructure is aging and requires even more investment and maintenance. On the distribution side, severe weather events were the predominant cause of outages. We must rebuild our existing distribution infrastructure to withstand modern storms and current engineering practices.”

Solid waste – C-plus, no change. Each American throws out about 4.5 pounds of trash per day, with half going to landfills and a fourth getting recycled. “Waste management systems face serious challenges: a plateauing rate of recycling, emerging contaminants in legacy landfills and changing global markets,” Tilchin said. The report calls for a national waste management infrastructure system that views municipal solid waste as a resource rather than for disposal.

Ports – B-minus, up from C-plus. Ports have received a boost in federal funding to increase capacities for larger cargo ships to remain globally competitive. Stahlman noted that there are over 300 ports across the country, many of which are smaller inland facilities away from the coasts. “And for them, there's still a large need for funding opportunities as they experienced stiff competition for limited federal grants,” he said.

Rail – B, no change. “Our rail infrastructure, and especially our freight rail network, is largely in good condition due to significant long-term investments,” said Schipper. The passenger rail system, which relies on federal subsidies, however, has fallen behind. “In 2019, Amtrak moved 32.5 million riders, but infrastructure-related issues caused 328,000 train-delayed minutes … hurting the reliability of the system.” It would cost $40 billion to bring the system into a state of good repair, he said.