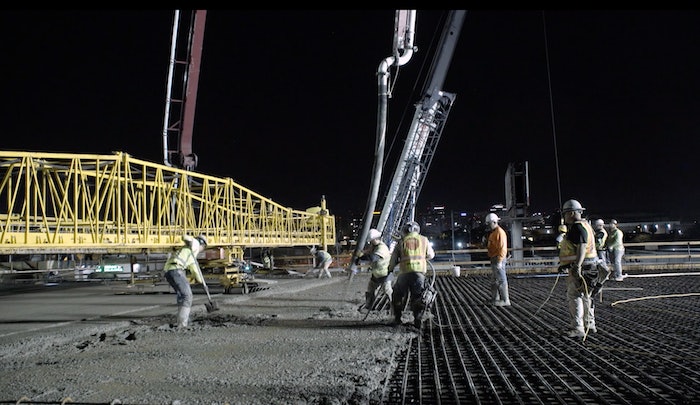 Crews pour concrete for a new I-17 bridge deck in Phoenix.
Arizona Department of Transportation

A new Interstate 17 bridge in Phoenix is nearing completion as concrete was poured recently for the northbound deck.

The I-17 northbound bridge over Central Avenue is replacing a span built in 1962 that has been demolished in stages while the new bridge is constructed.

The concrete was applied by an extended boom pump system that was based at street level, according to the Arizona Department of Transportation.

“For this particular operation, 545 cubic yards of concrete were poured for this span in just a matter of hours,” reports ADOT.

Check out this ADOT video of the concrete pour:

Work on the $13.5 million project began in May 2020. The southbound steel-girder bridge has been demolished and reconstructed. Traffic now uses that bridge while the northbound span is built. Once completed, traffic will travel three lanes in each direction.

Along with the upgrade, the new bridges will be wider to eventually add lanes after funding becomes available, ADOT says. The bridges also provide increased clearance for commercial trucks and to accommodate a future light-rail line.

The project is expected to be completed this year.