A robotic sealcoat vehicle has hit the market that automatically finds and seals cracks and only uses two workers.

The CrackPro Robotic Maintenance Vehicle is the result of a partnership between SealMaster and Pioneer Industrial Systems, whose president, Todd Hendricks, invented the concept. He said he got the idea in 2019 after watching a crack seal crew and thought there should be a safer, more efficient way. The company then set up its RMV division and reached out to SealMaster.

The RMV has been showing up at trade shows with more planned events for later this year. It will also be distributed through SealMaster’s franchise network.

The RMV consists of a Fanuc R2000 robotic arm, a SealMaster CrackPro 260 sealing unit, an air blow-off system to remove debris from the road, and an AI vision system made up of high-resolution cameras and lasers to find and measure the cracks. The system is powered by a 480-volt three-phase Stateline generator. All of the components are mounted to a Class 7 heavy-duty truck chassis.

The RMV requires an operator to drive the truck and a worker to stay on the back to monitor the application of the sealant and to refill the crack sealant tank.

The company says it can seal faster than a crew doing the work manually. The video below shows the RMV versus a crew:

As the AI vision system finds and measures the cracks, the data is used to map the cracks and send the information to the robotic arm. The driver can watch a monitor, which shows a camera feed of the arm. An LED light on the windshield turns red when the driver needs to stop to let the robot work and turns green when it’s time to move.

The RMV can also operate at night and works on parking lots as well as roads, the company says.

The setup of the RMV is also easy. The robotic arm automatically moves to its heating position, and the truck lowers. A worker swings out the metal gate barriers in the rear and attaches a chain between the end of the barriers between the robot and the worker.

While the RMV now only performs crack sealing, there are plans to develop it for various other road maintenance functions. The next development will be for automatic safety-cone pickup and placement. Because of its modular design, plans are also in the works to use the RMV for such tasks as road debris cleanup, reflector replacement, pothole filling, sign setting, post setting and road inspections.

The RMV is slated to appear at the American Public Works Association’s PWX conference Aug. 28-31 and at the Department of Defense Showcase Oct. 26-29.

SealMaster and RMV are also holding demonstrations around the country for contractors and local, state and federal public-works agencies.

To watch the RMV’s first trial run, check out the video below: 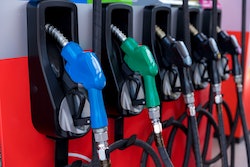 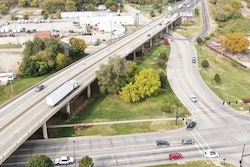 Kansas DOT Inspector Resigns After I-70 Viaduct Barrier Breaks Off 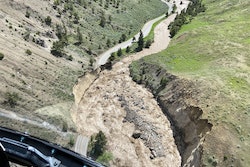