Work on the Harbor Bridge replacement project at the Port of Corpus Christi has been suspended temporarily over safety concerns, according to the Texas Department of Transportation.

TxDOT has called on the the bridge’s contractor, a joint venture of Flatiron and Dragados (FDLLC), to halt construction on the cable-stayed part of the Harbor Bridge as of July 15. The agency did not mention specifics for the suspension.

"We work hard to maintain productive relationships with all of our partners to deliver projects efficiently,” said TxDOT Chief Engineer Lance Simmons, “and we cannot compromise on safety. We have been transparent and direct in sharing our concerns with FDLLC as well as our expectations on addressing these safety issues.”

The Harbor Bridge replacement is an $803 million project that began in 2016 and is scheduled for completion in 2024. The current U.S. 181 bridge over the ship channel will be demolished after the new bridge is completed. The new bridge will have three lanes in each direction, consisting of 6.44 miles of bridge and connecting roadway, according to TxDOT. Its main span will extend 1,661 feet and become the second-longest cable-stayed bridge in the U.S. and Canada when completed. The strand cables for the bridge would stretch 862 miles if laid out end to end. The Gordie Howe International Bridge between Detroit and Canada will have the longest cable-stayed span, of 2,799 feet, when completed, also slated for 2024.

In 2020, TxDOT fired FIGG Design Group as the designer of the new bridge, following a report that blamed the firm for the 2018 fatal collapse of a pedestrian bridge being built at Florida International University in Miami. FIGG was replaced by a joint venture of Arup and Carlos Fernandez Casado, called Arup-CFC. The new design team was hired by Flatiron/Dragados.

TxDOT has requested that Flatiron/Dragados resolve the issues before construction resumes on the cable-stayed portion. Work on other parts of project continue. 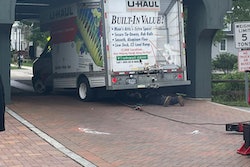 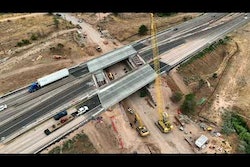 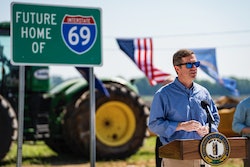 Ground Broken for I-69 Ohio River Crossing Between Kentucky, Indiana