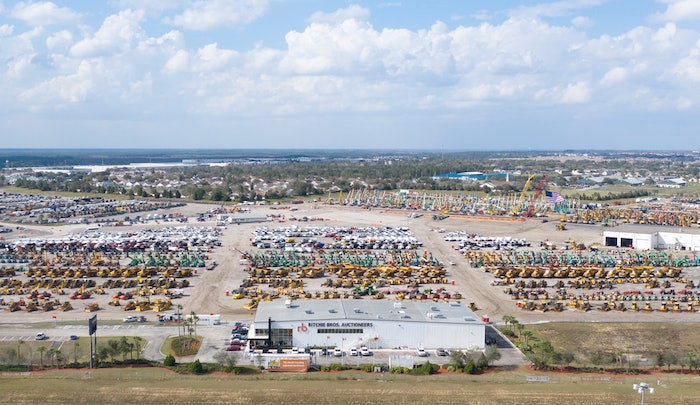 Ritchie called the sale a "hybrid event," where machines were stored and available for inspection at its Orlando facility up to the sale, but all bidding was conducted online.
Ritchie Bros.

The supply and demand picture coming out of the Ritchie Bros. signature Orlando sale on Feb. 15-20th offered some intriguing insights on what might be shaping up to be an interesting auction year.

First, the number of bidders was up. Way up.

Last year, there were 18,000+ bidders combined for Ritchie's live event and in online bidding. This year, everything went online in response to the Covid-19 pandemic, and there were 22,000+ bidders, an increase of 25%.

“Our February Orlando auction is our premier event each year, attracting thousands of buyers and sellers bidders from around the world,” says Jake Lawson, senior vice president (US South), Ritchie Bros. in a statement to Equipment World.

“Moving to 100% online, our digital marketing teams have been able to drive unprecedented demand as we registered 25% more bidders compared to the same auction in 2020. We saw very strong pricing in Orlando this year, with the strongest performers being truck tractors, skid steers, loader backhoes, and excavators.”

These bidders, however,  had less equipment to bid on. There were 200+ fewer sellers and 1,500 fewer lots on the block this year, in comparison with record numbers of both sellers and lots in 2020. Looking at individual machine types, most major categories saw double digit declines in the number of units for sale (see chart below). 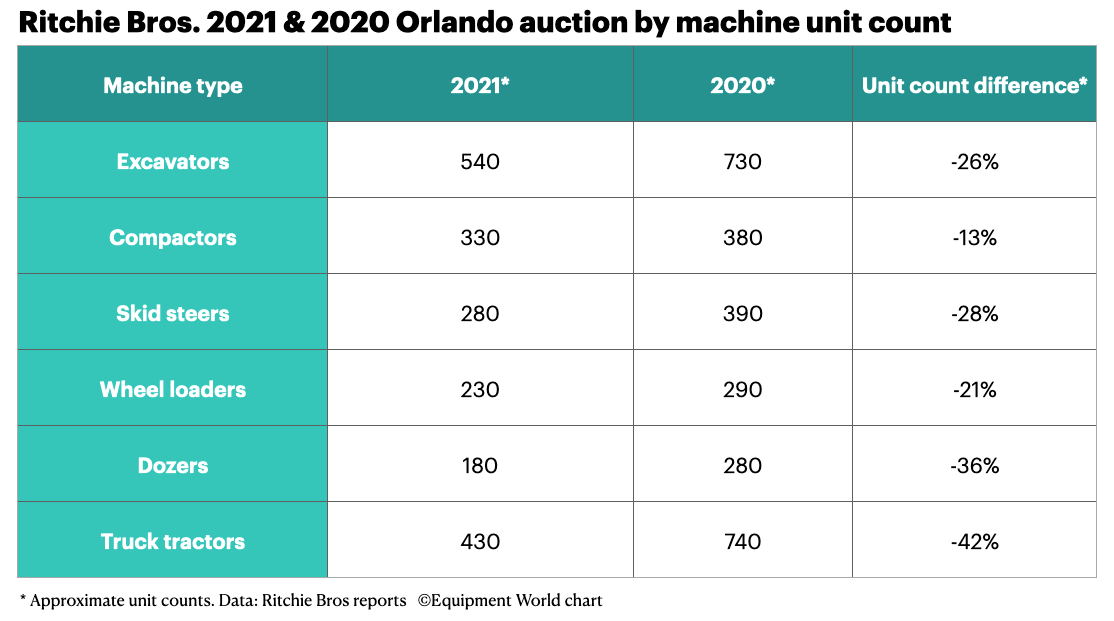 Did fewer machines and a higher number of bidders create a classic supply-and-demand scenario, with sellers getting higher prices?

The  FLV on a machine is the prevailing auction sales price benchmark for an individual unit sold at auction. It only includes units with a valid make, model, and model year in the past 10-year time frame validated in the Rouse database.

Rouse says the "average sales price/FLV" shown in the following charts is arrived by first calculating the Rouse FLV on on individual unit, then dividing the sale price on that unit by the Rouse FLV and then taking a straight average of this ratio for all units within a machine type.

For example, the average sales price/FLV for small and medium excavators (Including compact and midi-sized units) was 99.7% of the Rouse FLV. This can also be interpreted as on average, sale prices were 0.3% lower than the Rouse FLV. 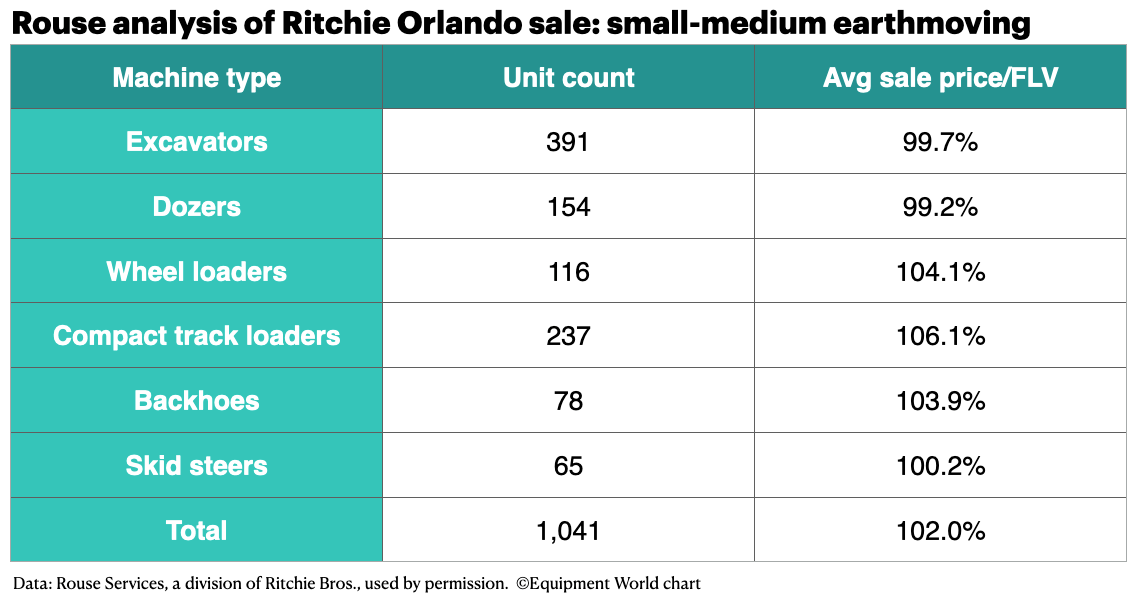 In the large earthmoving segment, the Ritchie overall average sale price numbers were lower, at 97.9% of Rouse FLV index. Motor graders (105.4%) and articulated trucks (103.6%) generated the highest values in this segment. 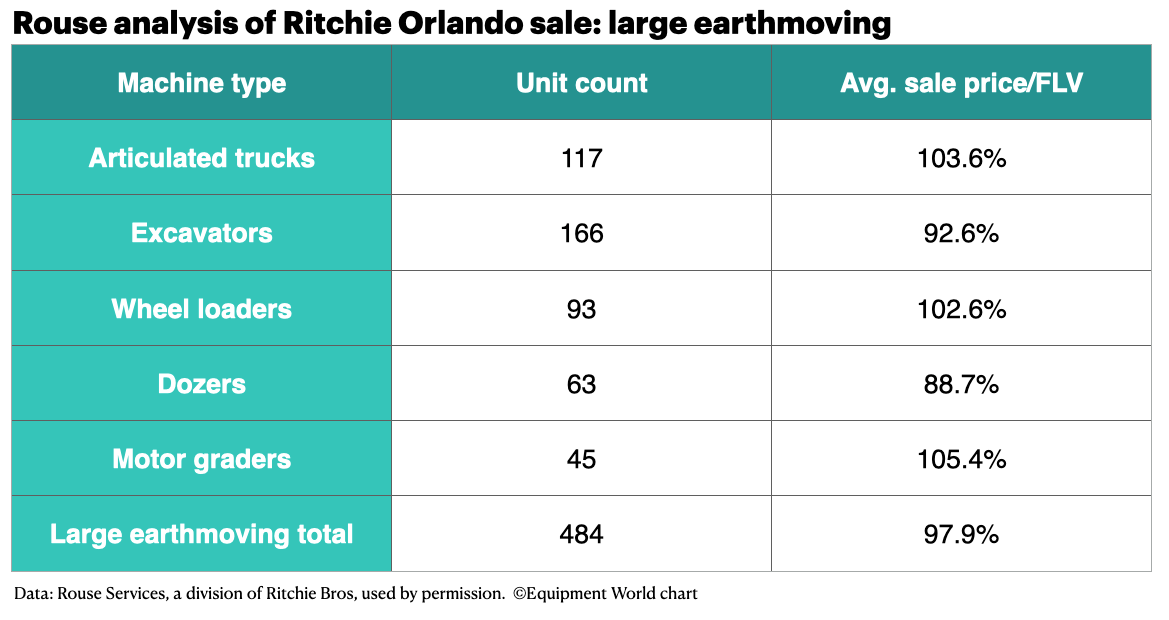 Ritchie called the 2021 sale a "spectacular success," noting it was the "largest-ever 100% online equipment auction."

"There was "strong pricing across every asset category," said Ann Fandozzi, Ritchie CEO, who took over the helm right before the company's 2020 Orlando sale. “This continues the positive pricing trend we saw at the end of 2020 and earlier this month in Houston."

Ritchie called the sale a "hybrid event," which machines were stored and available for inspection at its Orlando facility up to the sale, but all bidding was conducted online.

U.S. buyers bought about 82% of the equipment sold, including 18% purchased by Floridians. International buyers, including those from Australia, Germany, Egypt and Korea, purchased the remaining 18% of equipment.

Some of the equipment gaining top dollar during the sale included: