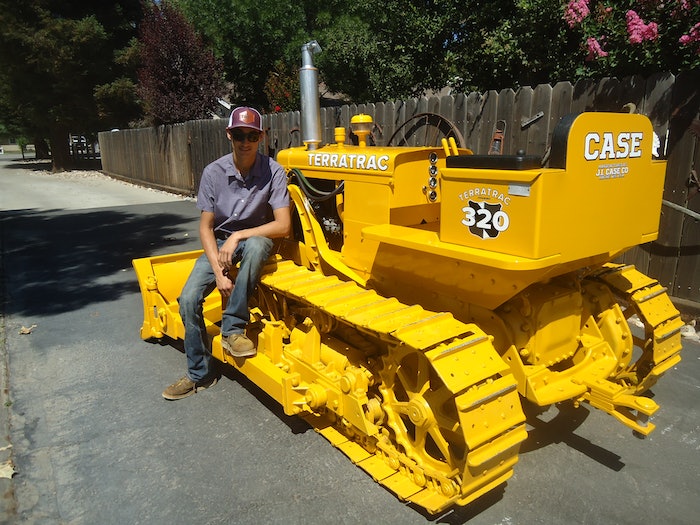 He didn’t realize how rare it was until he started trying to find parts for the 1958 Case Terratrac 320.

“Once I got it home and I started looking for parts, I couldn't find anything,” Casey, now 18, recalls. “I could barely find pictures of it. And I'm like, ‘Oh, geez, this might be a little harder than I thought.’”

[To watch a video of him operating the Terratrac, see the end of this story.]

Casey was given the tractor by JB Dewar, a fuel service company in San Luis Obispo, California, which sponsors a local competition for high school students to restore antique tractors. Casey intended to enter the competition, just as his older brother, Taylor, did three years before. Taylor had restored a 1951 Oliver OC-3 crawler dozer and had won.

“It was super rusty,” says Casey of the Terratrac. He learned that the owner had left it on a neighbor’s property to avoid repossession, and it was never picked back up. After many years, the neighbor later donated it to JB Dewar, which collects antique tractors to give to the students to restore for the competition. 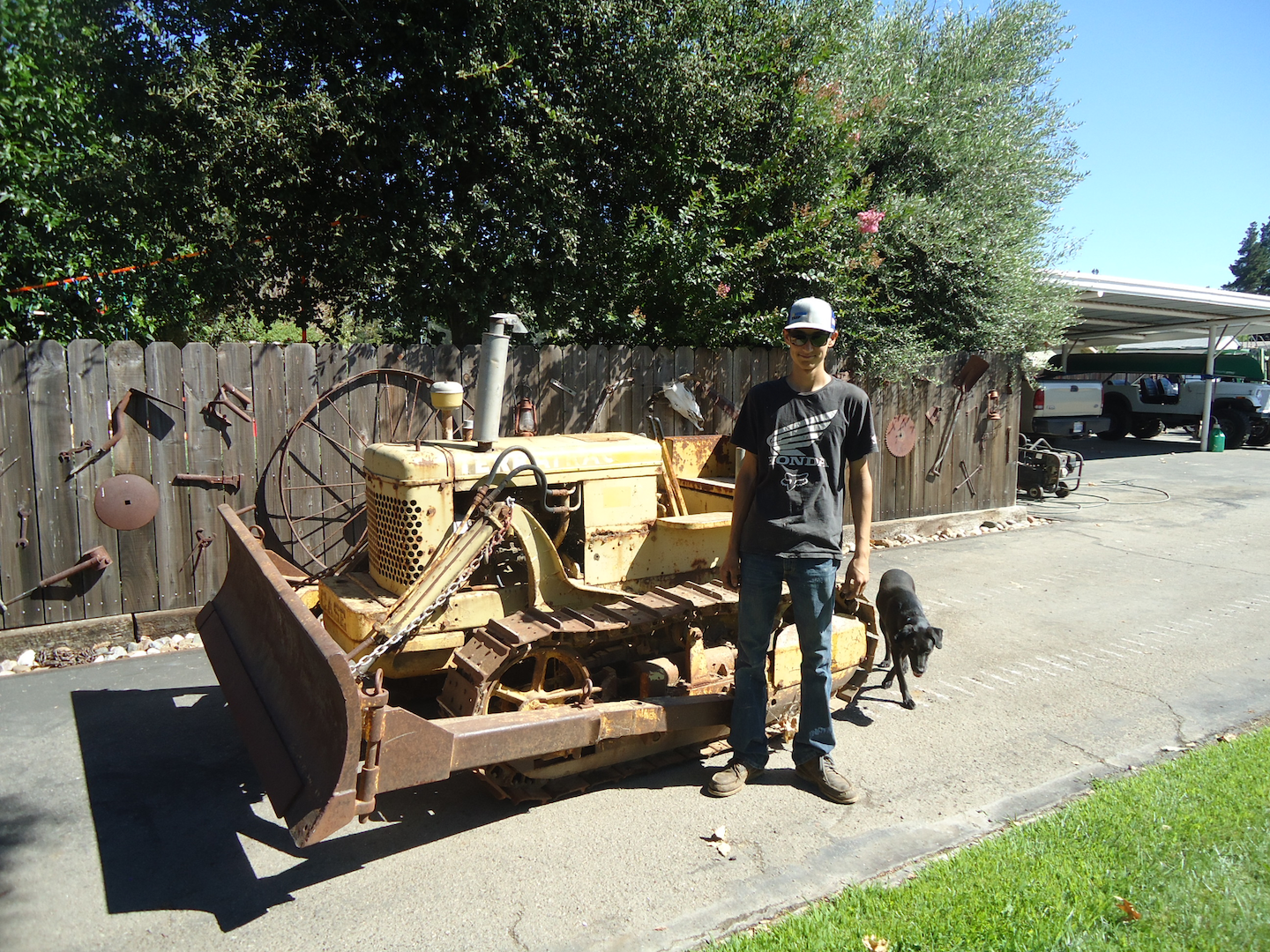 "This might be a little harder than I thought,” was going through Casey Havemann's mind when he started to try to find parts for this 1958 Case Terratrac 320.Submitted by Casey HavemannCasey, who was a student at Atascadero High School in California at the time, and his family are known for restoring old machinery and their standout mechanical skills. Casey’s father, Tim, was a mechanic for United Rentals before later rising to a sales position there. He instilled in his sons his love for working with machines. Taylor went on to graduate from the diesel technician program at Reedley College in Fresno, where Casey will start next month.

“They knew what our outcome is of our tractors and how well we go into it, and they know that we're going to finish the project,” Casey explains of how he ended up with the Terratrac. “They were saying they would rather have me do it and watch me rebuild it rather than watch someone do it and not finish it, just leave it all apart. Because it's kind of part of San Luis Obispo County history in a sense.”

During his parts search, he learned of the Terratrac’s rarity. Only 496 were produced, according to Case Construction Equipment. The dozer runs on a 2.4-liter, 4-cylinder Case gas engine and weighs 6,405 pounds.

Between his school work, a welding class he was taking and a job, Casey tried to squeeze in time to restore the dozer. He did a lot of the work himself, along with help from his dad, who has a fully equipped shop with a plasma cutter, forklift, lathe and welding stations.

When summer came, he began to devote 12-hour days to his project. 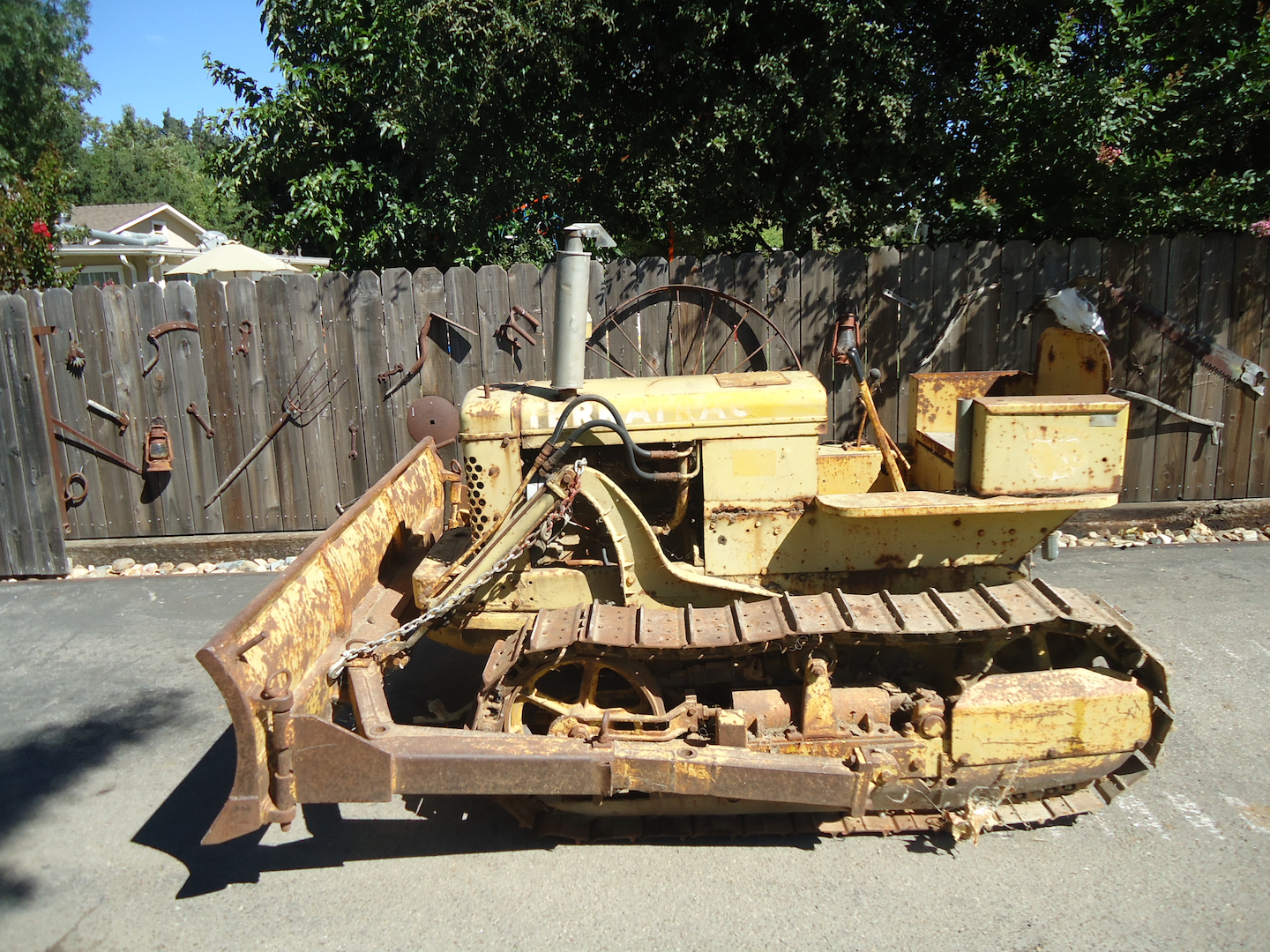 "It was super rusty," said Casey Havemann in describing his 1958 Case Terratrac 320 before he restored it.Submitted by Casey HavemannOne of his first tasks was to fabricate replacements for the fenders, which were rusted through and covered in pits. “I made them all look like from the factory,” he says.

The transmission and the tracks were in pretty good shape, but the motor had to be rebuilt, he says. The same engine model had been used in other tractors during that period, but it was still a tough find. He found a rebuild kit online. “He said it was the last one that he had,” Casey says of the owner. “So I kind of lucked out in getting it.”

He fabricated a new generator mount and toolboxes that attached to the seat. He found some Case gauges on eBay.

He hit a snag in trying to find replacement decals. After hours of online searching and calling shops, he decided they’d have to be made from scratch. So before he could sandblast the dozer, he took the parts with decals to a local shop that could reproduce their original look. 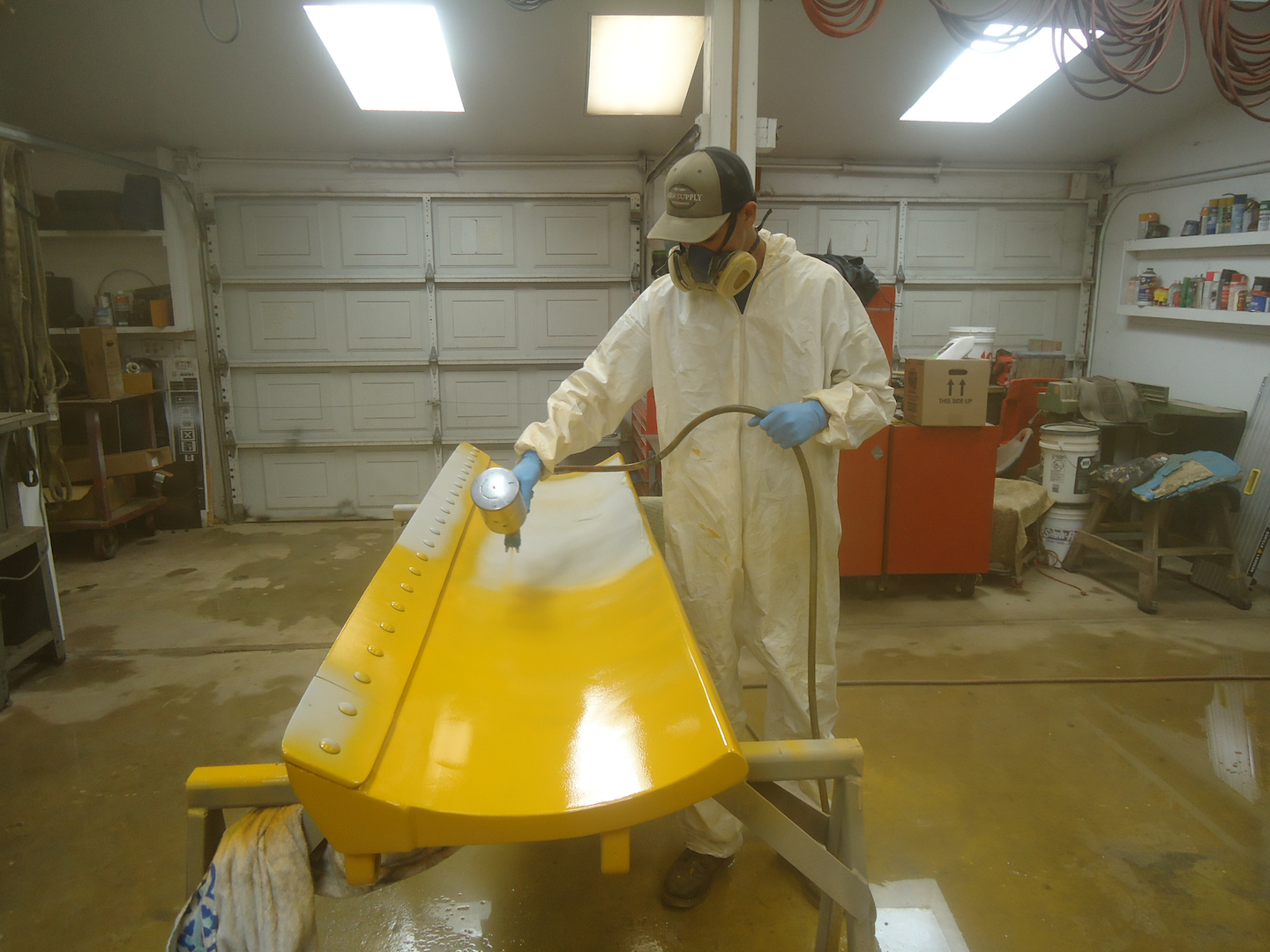 "I used about three and a half gallons on that tractor," says Casey Havemann of the paint job for his 1958 Case Terratrac.Submitted by Casey HavemannCasey actually took apart and reassembled the Terratrac twice.

The first time, he sandblasted all the parts. He rebuilt the motor and left it all sandblasted for the first reassembly. About nine months after getting the tractor, he now had it running. His dad brought home some asphalt grindings. Casey and his brother Taylor rolled out their antique dozers to have some fun.

“We were running them back and forth tracking all the asphalt chunks down,” Casey says. “We were trying to break it all up. It was super fun.”

After putting about 5 hours of runtime on it, Casey took the Terratrac apart again, this time to do the body work and paint it.

When asked what he likes most about the Terratrac, he jokes and says, “So my name is Casey, and it's a Case – it’s just missing the “Y.”

On a more serious note, he adds, “The paint came out super nice. I used about three and a half gallons on that tractor. I sprayed everything myself, and I kind of impressed myself.”

He also enjoyed the fabrication, and welding on cast iron for the first time. “That was cool to learn about, how to preheat and then post-heat,” he says of the cast-iron work.

All in all, it was a top-to-bottom restoration to make it look like new. “That's how we like to do it,” he says. “We just go through everything, triple-check.”

In all, the restoration took about a year and a half and about 600 hours of work. 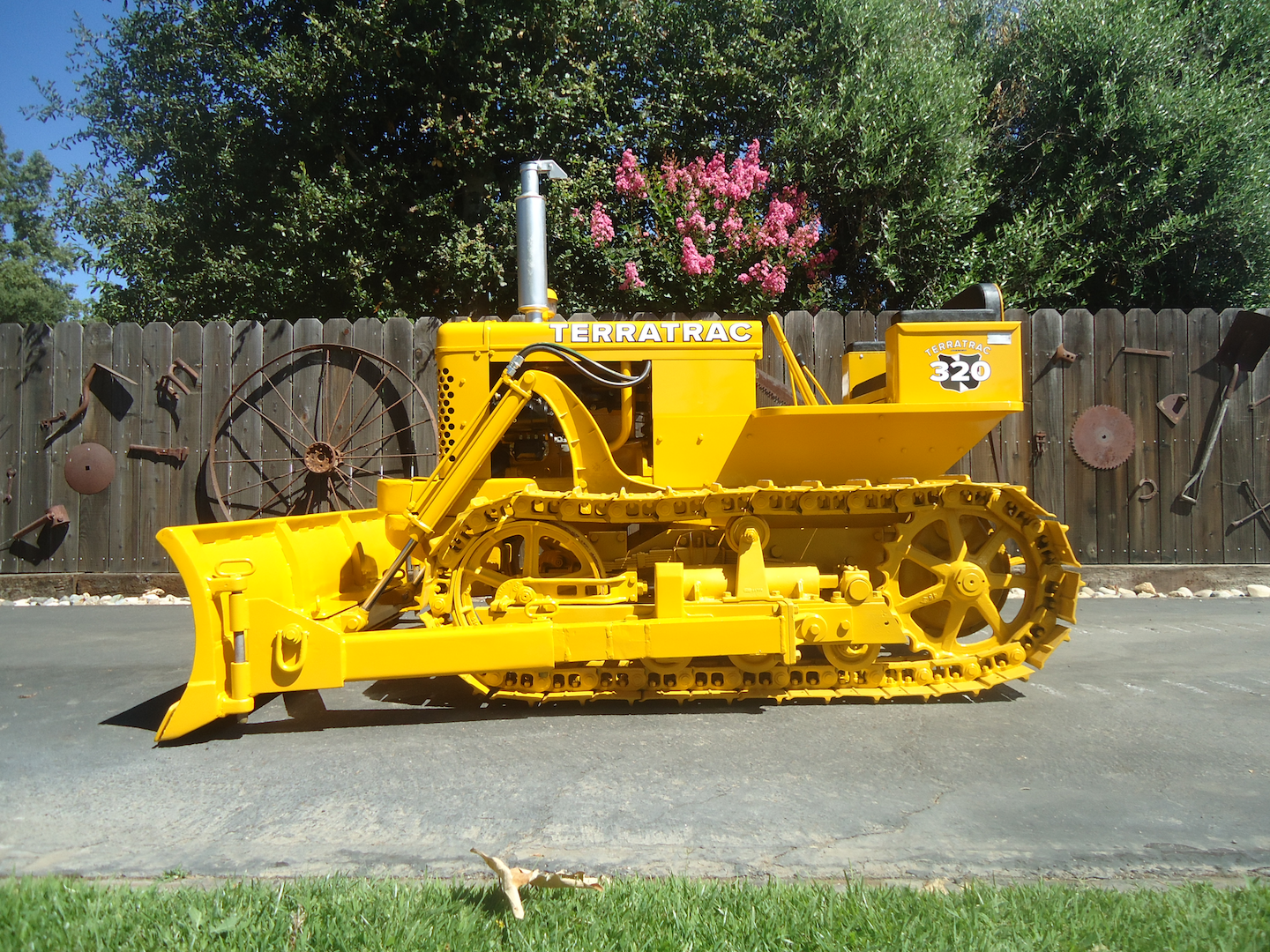 Casey Havemann's restored 1958 Case Terratrac 320.Submitted by Casey HavemannWhen the competition day arrived for the 2020 JB Dewar’s Tractor Restoration Educational Program, Casey’s Case won. The honor came with a $4,000 prize. He had spent $3,000 on the restoration. He then advanced to the national Delo Tractor Restoration Competition, where he was named a finalist and won honorable mention for best photograph.

He now keeps his 1958 Case Terratrac as a showpiece. After he painted it, he decided not to use it as a working machine. He plans to enter it in nearby antique equipment shows.

He says he has no plans to do another restoration project on antique equipment.

“This was my last one,” he says. The Case project had followed the restoration of a 1951 Farmall Super C tractor. “So I’m a little worn out from that,” he says of the two restorations.

And even though he’s turning his sights away from antique equipment restoration, he’s glad he found the old Terratrac 320.

“For how rare it is,” he says, “it's kind of cool just to have something you normally don't see.”

Watch Casey operate his rare Case in this video below: 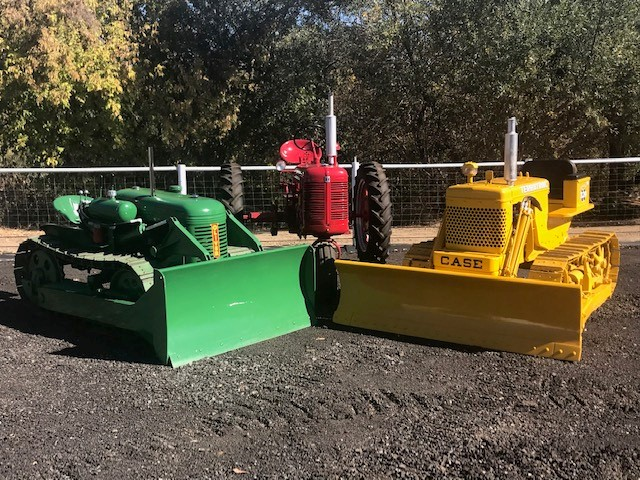