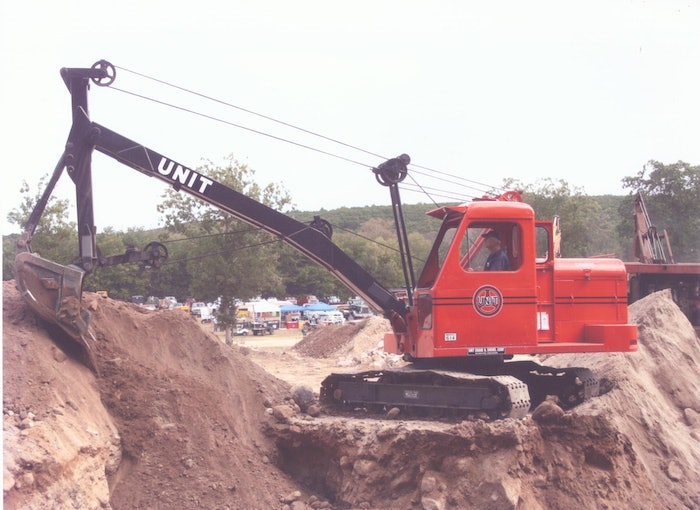 “And that's all it says,” recalls Cliff Bridgford of the post that came up about 20 years ago. “I didn't pay much attention to that.”

Six or so months before, Cliff had been at an antique engine show in Connecticut when a collector arrived with a 5/8-yard Unit 617 with a backhoe attachment, also called a trenchhoe, pullshovel or hoe.

“I've always wanted one of these, ever since I was a kid,” Cliff told his friend Ed.

The late-1950s cable shovels had been a common sight when Cliff was growing up in New Hampshire, just before hydraulic equipment began to take over. He recalls getting a toy Unit 357 shovel as a boy. “It came with a clamshell and crane hook and boom,” he says. “And I ended up making all the different attachments for it with my Erector Set.”

Unit shovels can trace their history back to Henry Ford’s brother William, who formed the Wilford Shovel Company in Detroit in 1925. It became the Universal Power Shovel Company in 1927. A year later, Universal was acquired by Unit Corporation of America. The shovel segment of the company was sold in 1937 and continued as the Unit Crane & Shovel Corporation.

Two Units for the price of one

A few months after Cliff’s talk with Ed, Ed called back with the Units’ owner’s phone number. When Cliff called, he learned the machines had already been sold.

A few months later, he was on the HCEA forum when the Unit backhoe post appeared.

After Cliff dismissed the post, someone else joined the forum.

“You know,” the post read, “it'd be a lot easier to sell your Unit backhoe if you told us where the thing was.”

The owner then responded with his contact information, and several months later, Cliff was in New York having a look at the machines. Turns out, the same Unit machines his friend Ed told him about were now with the owner in New York – a 1955 Unit 357 shovel and a 1958 Unit 614 backhoe.

“So this was the guy that bought the machines from the guy that Ed had talked to, which was really kind of remarkable,” Cliff recalls.

The owner gave Cliff a reasonable price for the Unit 614 backhoe, but Cliff wasn’t sure about it. He really wanted the Unit 357 shovel. He said he’d think about it, and started to leave.

“Wait a minute,” the owner said. “I'll tell you what. If you really want the shovel, I’ll sell you both of the machines for the price of the one.”

When the Units were delivered to his home in Litchfield, New Hampshire, he focused on restoring the Unit 614 backhoe, since it still ran.

“I basically took pretty much everything off the machine that I could lift off,” he says.

He overhauled the engine, a 2-cylinder Detroit Diesel 2-71, made new control linkages and bushings. He overhauled the clutches. He performed all the welding, machining and mechanical repair. He sandblasted and painted it.

He restored it over seven years, after work, on weekends and on days off.

“It came out pretty decent,” he says. “Not too bad for a one-man restoration.”

It made its debut at the 2007 national show of the Historical Construction Equipment Association at the Zagray Farm Museum in Connecticut. A friend who is an expert operator taught him how to run it. The 614 still resides at the museum, where Cliff brings it out for three shows a year. 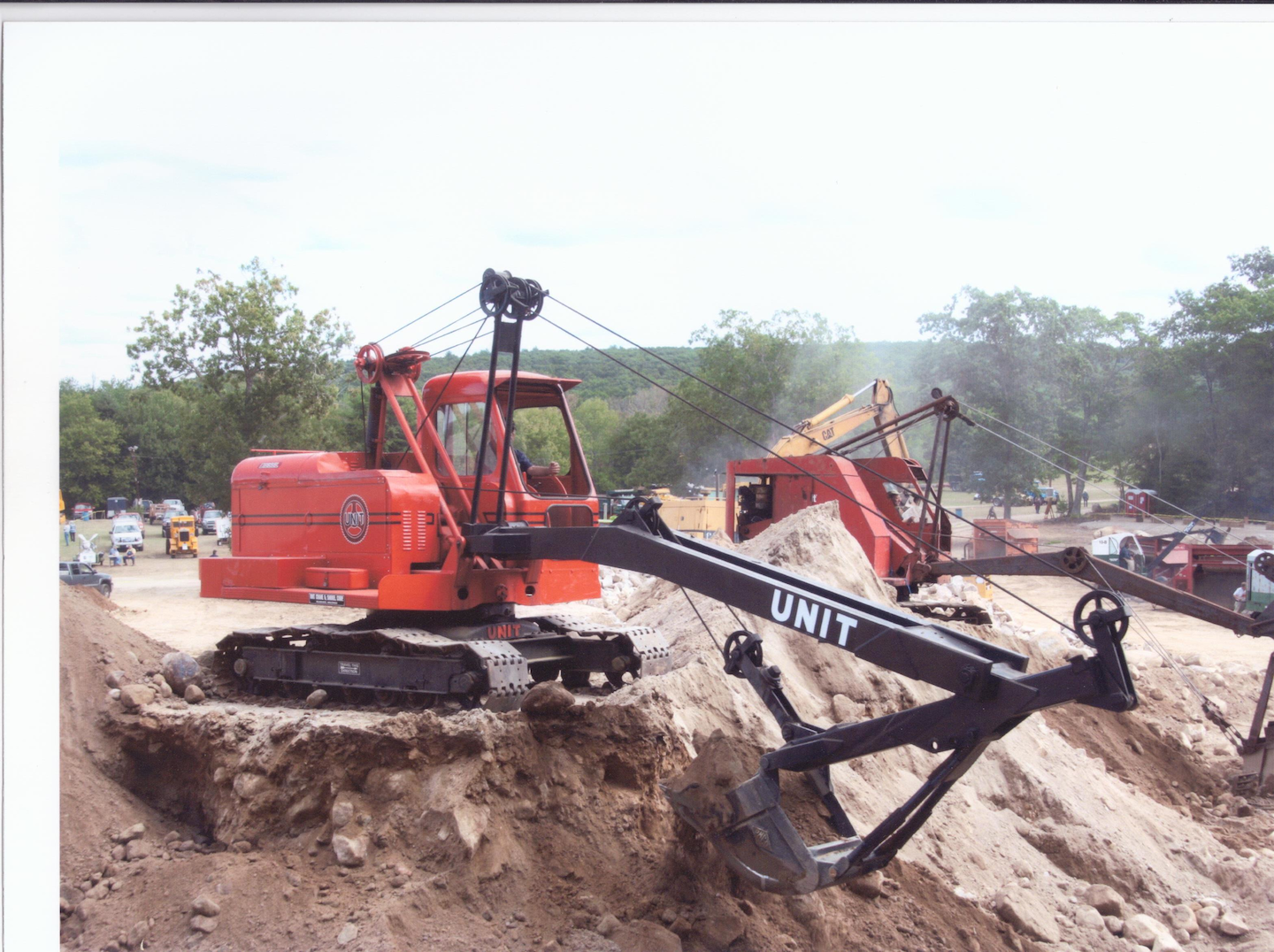 Cliff Bridgford restored his 1958 Unit backhoe by himself over a seven-year period.Submitted by Cliff BridgfordLearning to operate it took some time. He had run equipment in his teens for a residential contractor. He later graduated from diesel engine mechanic school. He was drafted and served as a mechanic in Vietnam during the war. After the war, he opened his own auto transmission business, which he operated for 45 years.

“I never lost my fondness for construction equipment,” he says.

But he had never operated the cable machines. The 614 has a fixed-angle, half-yard bucket. The machine weighs about 15 tons.

A drag cable is used to pull the bucket in to dig. A hoist cable raises the boom and bucket. That’s controlled by two clutches and two brakes. A swing clutch is used to swing left and right.

“They're a pretty quick, efficient machine,” Cliff says. “It's actually faster than any 1958 hydraulic backhoe was.”

Over the years, Cliff learned to operate the 614 efficiently, but he doesn’t consider himself an expert.

“A hydraulic excavator is a lot easier to operate,” he says. “If you were running a hydraulic excavator, and all of a sudden you got confused and you let go of all your controls, the thing would just stop right where it was. The bucket would remain in the air.

“If you got confused on a cable machine, gravity's going to take over.”

The bucket comes crashing down.

“There's a lot more skill involved in a cable machine.” 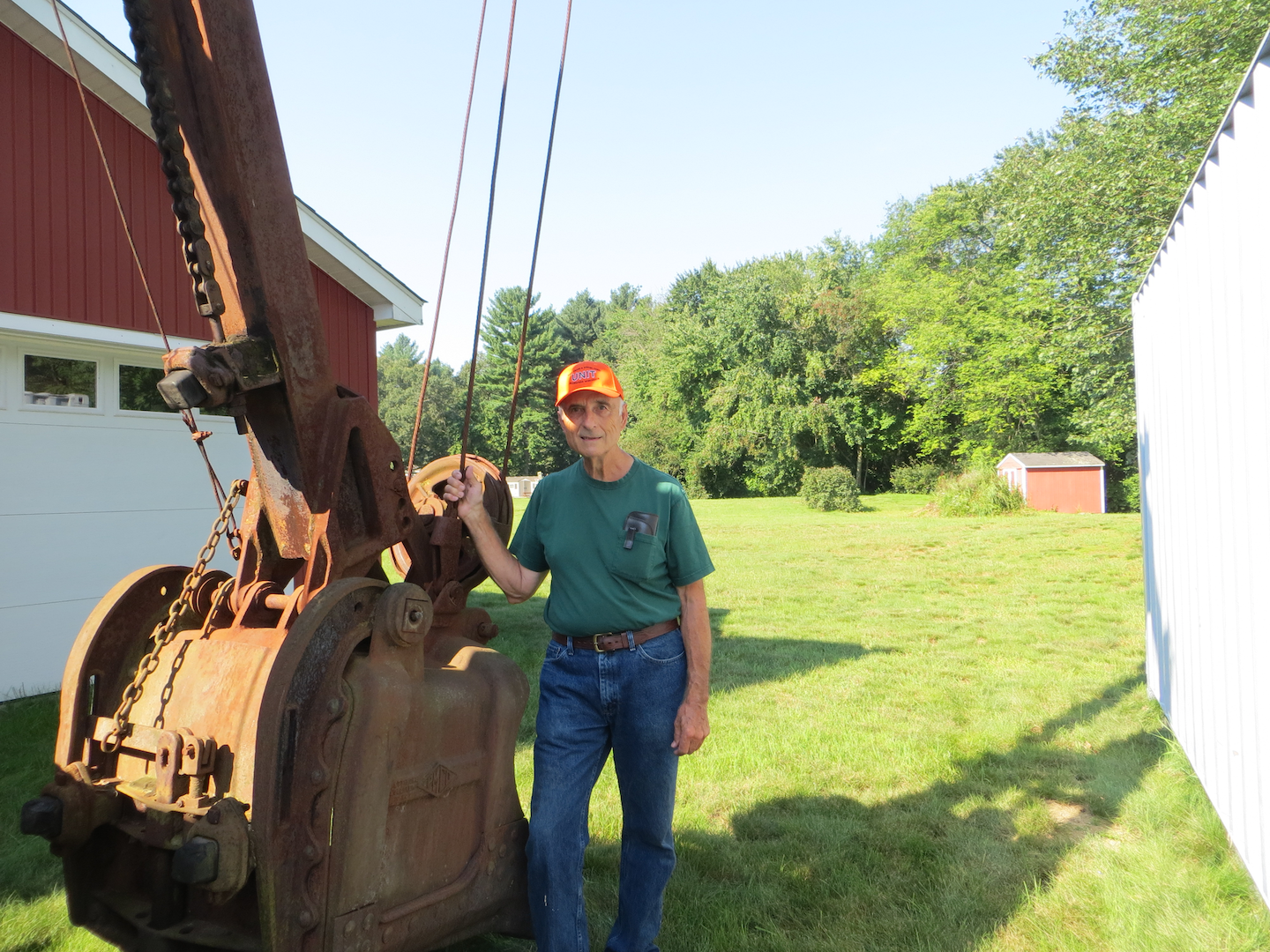