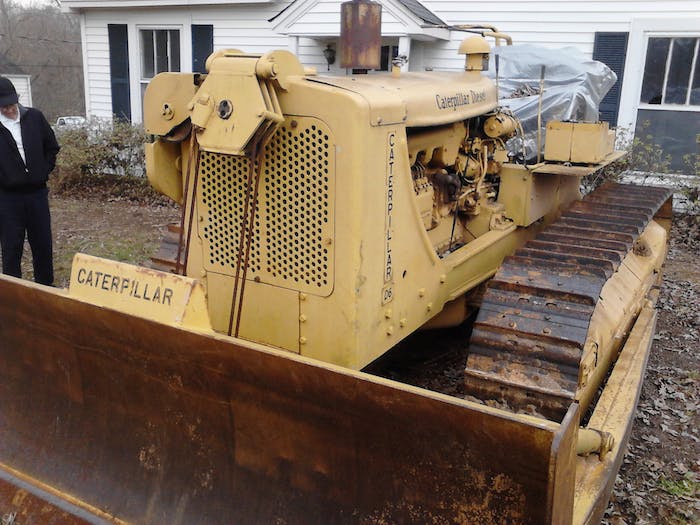 Erik Christenbury bought this 1956 Caterpillar D6 9U he saw in a front yard one day while driving down the highway. It had less than 900 hours on it and all original parts.
Erik Christenbury

Erik Christenbury often gets calls from people wanting to display antique Caterpillar construction equipment. But one that stands out in his mind came about seven years ago from a coordinator on a major motion picture.

The coordinator was calling from Wilmington, North Carolina, on behalf of the director, and he needed a 1950s era dozer.

As founder and president of Chapter 12 of the Antique Caterpillar Machinery Owners Club, Christenbury was happy to assist. Assuming the movie was being shot in his home state, he sent a photo of his 1956 Cat D6 9U dozer. He had bought the machine about a year earlier – a rare find as it had less than 900 operating hours on it and all original parts.

It was about as brand new as a 1956 dozer could be. He said the director was welcome to use it.

He soon learned the movie was being shot in New Orleans – more than 800 miles away from his home in Liberty, North Carolina. Christenbury looked around for antique dozers closer to the movie location, but the director had his heart set on his D6. He wanted it in New Orleans by 5 a.m. on a Monday.

Along with the long distance, the dozer’s blade made it a wide load, so it couldn’t be hauled on a Sunday when wide loads are prohibited, unless the blade was removed. Christenbury let the coordinator know it wasn’t going to be cheap. He immediately got the OK after sending in his quote.

He and his friend removed the blade, loaded up the dozer and hit the road to New Orleans.

“We pulled up on the movie set about 9 o'clock Sunday night, and they had a security guard there,” Christenbury recalls.

It was just a little house by the side of the road. It didn’t look like a movie set.

“I was like, ‘Is this the right location for the movie?’”

The guard said it was.

“Where can we unload?”

Christenbury began his antique Caterpillar equipment collection in the 1990s, starting with the D2 tractor his grandfather bought new in 1940. A dealer had talked his grandfather into trading in his gasoline-powered Cat Fifteen for the new diesel-powered tractor, which was quickly becoming popular with farmers. He paid $1,800 for it.

His grandfather, Silas Christenbury, used the D2 as a drawbar tractor on his cotton farm for terracing, plowing, and dragging logs out of the woods.

“He always said that was his favorite tractor,” Christenbury recalls.

Christenbury bought the worn old tractor from his grandfather. He cleaned it, got it running and slowly restored it over a period of years. He calls it the pride and joy of his collection, and it was just the beginning.

“That was what started our Caterpillar collecting,” he says. “And unfortunately, Caterpillar made a lot of different models. So as a collector, you decide, ‘Hey, I’d like to have one of each model.’ And then it just grows from there.” 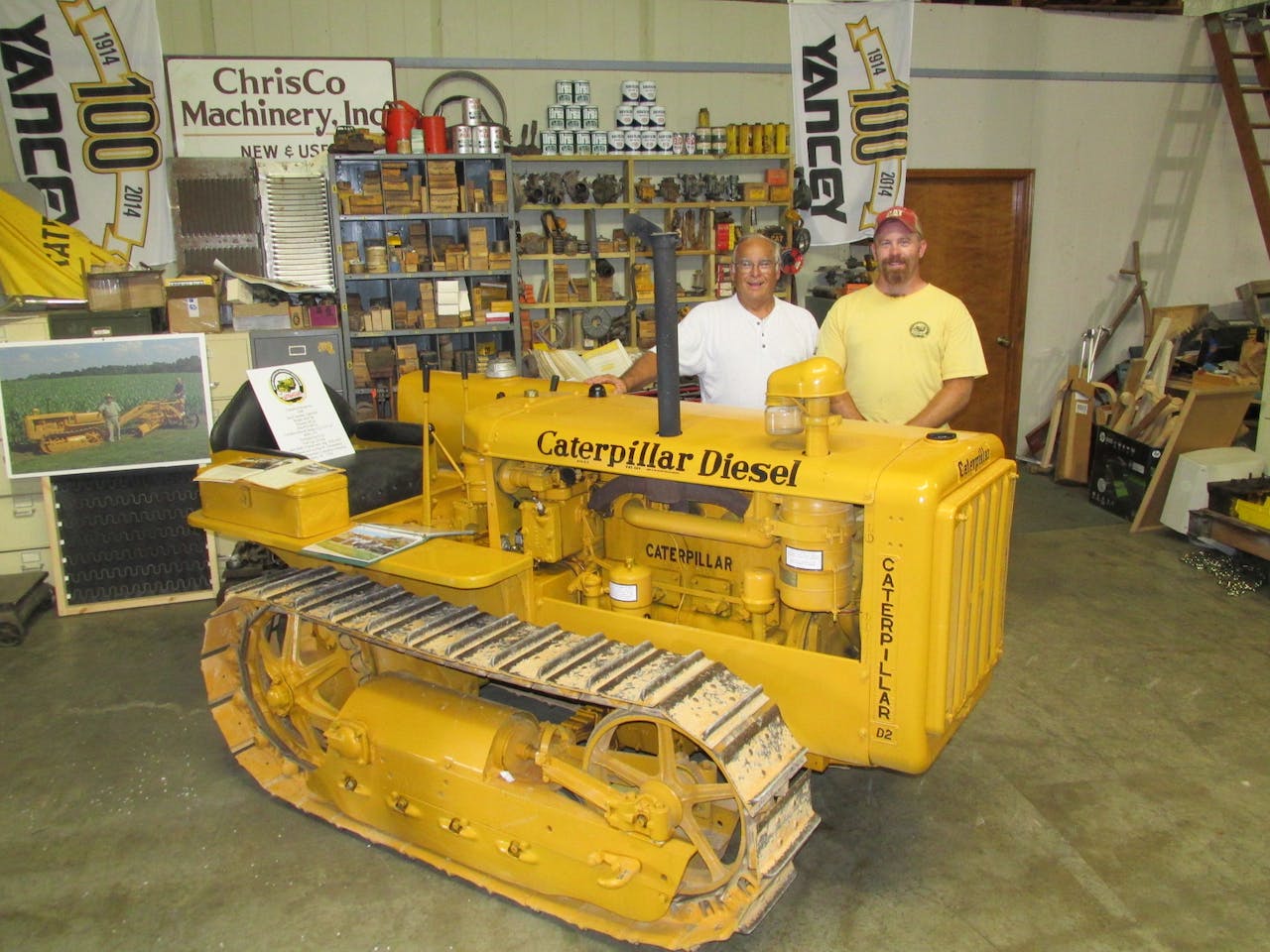 Today Christenbury has about 150 pieces of antique Cat equipment he has acquired from all over the country. One of those is the 1956 D6 9U he lucked upon one day.

While driving down a highway, he saw it covered with a blue tarp in a front yard.

“I turned around and knocked on the front door,” he recalls. “An older man came to the door and gladly talked about his tractor.”

Charles Moretz had operated the D6 since his employer bought it in 1956. When his boss no longer needed it on the farm and decided to sell it, Moretz bought it and had kept it all those years. It had less than 900 hours on it, and all parts were original. Christenbury let him know that if he ever decided to sell, he’d be interested.

“Halfway home my phone rang,” he says. “It was the owner of the D6 I just looked at, offering it to me for purchase.

“Needless to say, we struck a deal on the phone, and I picked it up the very next day.” 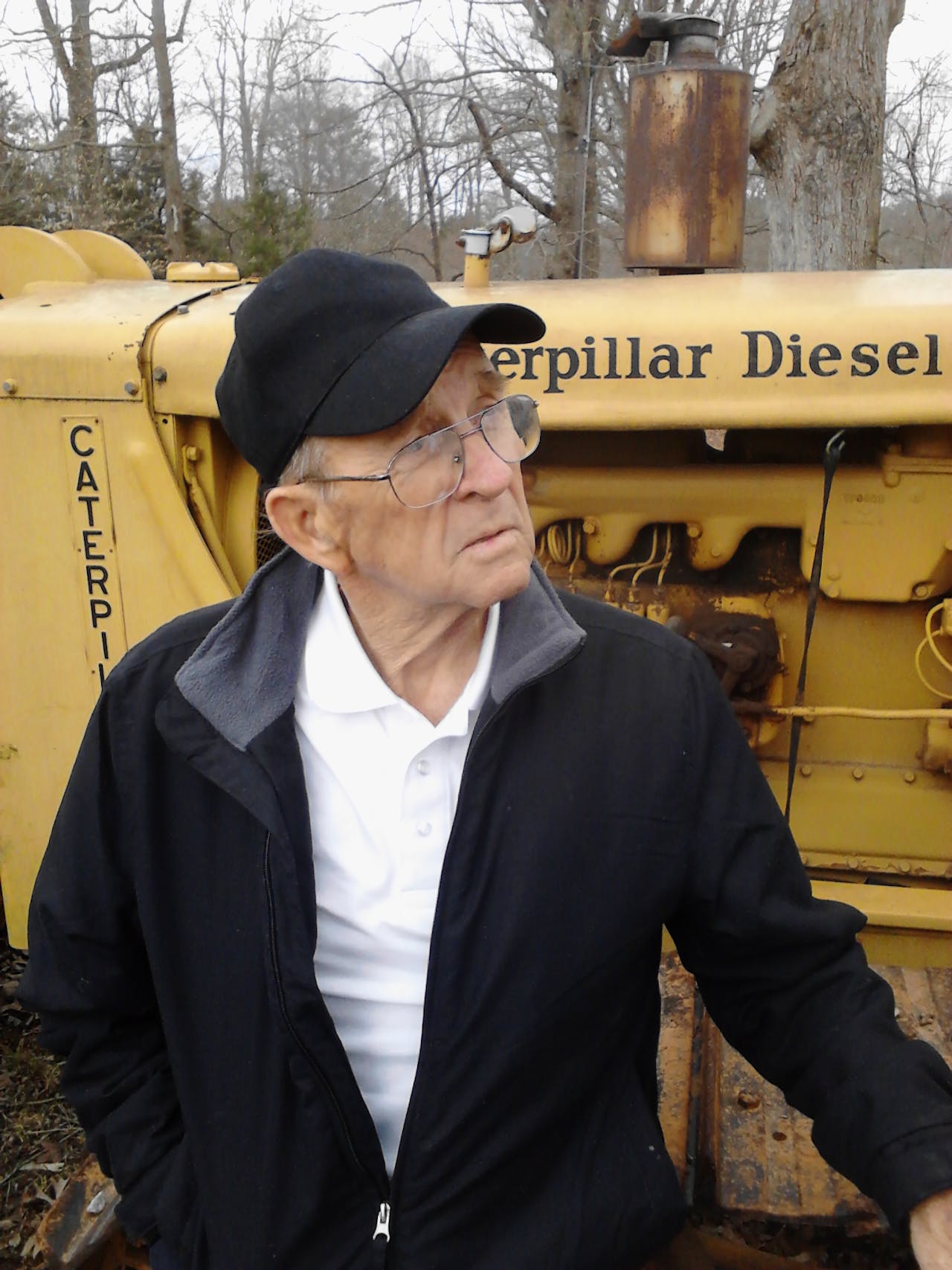 He needs a hat

Christenbury and his friend were soon met by the director after they arrived at the movie’s staging area at 5 a.m.

Christenbury didn’t know the name of the movie, what it was about or how they intended to use the D6. He was surprised when the director asked him if he could operate it for them. He said he’d be glad to teach someone, that it wouldn’t take long to learn.

“We'd rather have you do it,” the director said.

Christenbury agreed and soon his hair was getting cut, his goatee shaved, makeup applied and his 1950s-style wardrobe donned. But there was one thing missing.

“Every good dozer operator wore a hat to keep the sun out of his eyes,” Christenbury told them. “You’ve got to give me a hat.”

“They gave me this hat that looked like Indiana Jones.” 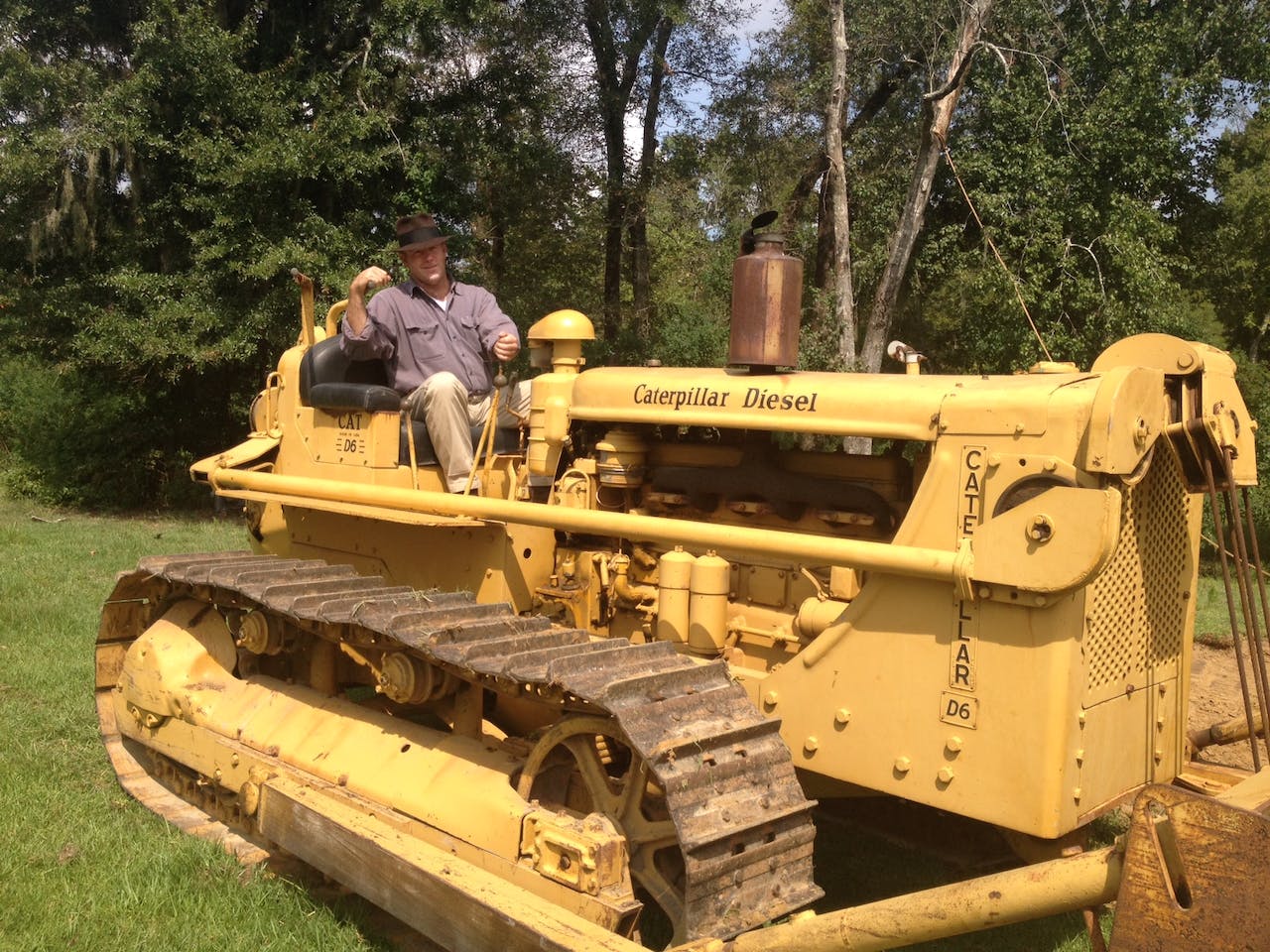 After a long wait, Christenbury was told where to put the dozer and where the cameras would go. He still didn’t know the movie’s name or story line.

“I was like, ‘Well, what are we going to do with it? Are we burying dead people? Are we building something? Making a road?’”

“I can make you a pond,” Christenbury replied.

And so for about 5 minutes, he moved dirt while they filmed. Later, they had him lean up against a pickup truck and pretend to talk to one of the characters while the main actors were behind him.

He was about to leave early the next morning when the coordinator who had hired him said they needed him for one more day. The director wanted another shot with the dozer.

“So I’m pushing dirt again, and they’re throwing dust in the air,” he says. “And they’re zooming up on the tracks as it's moving and dirt spilling over the blade and that kind of stuff.”

The script described it: "A ROARING BULLDOZER's iron snout dredges up earth."

It lasted about 5 or 10 minutes, and the scene was done. Christenbury and his friend could head back home to North Carolina.

“Children of the Corn” reunion

While on the set, Christenbury eventually learned that the name of the movie was “Trumbo,” starring Bryan Cranston, Diane Lane and John Goodman.

“We saw Diane Lane and Bryan Cranston,” Christenbury says. “John Goodman wasn’t there yet, but I saw a lot of actors.”

The movie is based on the life of Dalton Trumbo, a screenwriter who was blacklisted during the McCarthy era. Christenbury’s scene was to show that Trumbo had come into some money and wanted to build a lake by his home.

Christenbury, of course, was the dozer operator. His friend was the surveyor.

Playing "sun-leathered contractor Jeff Krandall" in the scene was Sean Bridgers, an actor Christenbury had met before.

At age 16, Christenbury had played a role in the horror flick “Children of the Corn Part II – The Final Sacrifice,” which was shot near his home in North Carolina.

Bridgers was also in the movie, which came out in 1992.

Christenbury, who was big for his age, was a stunt assistant and also played one of the children of the corn. “I was one of the terrors that went around killing people,” he says. One of his “victims” was a doctor he "stabbed."

So when he saw Bridgers on the “Trumbo” set, he ran after him.

“Hey, buddy, were you in ‘Children of the Corn Part II?’” he asked.

Bridgers said he was, turned back around and kept walking.

Later, Christenbury got a second chance to get reacquainted. He was on the set later in the day when Bridgers walked around the corner.

“You don't remember me,” Christenbury said, “but I was in the ‘Corn’ movie with you way back when.”

“We talked and he was real nice guy,” Christenbury says.

“It’s funny,” Christenbury recalls telling Bridgers. “The only two movies I've ever been in in my whole life, you were in both of them.” 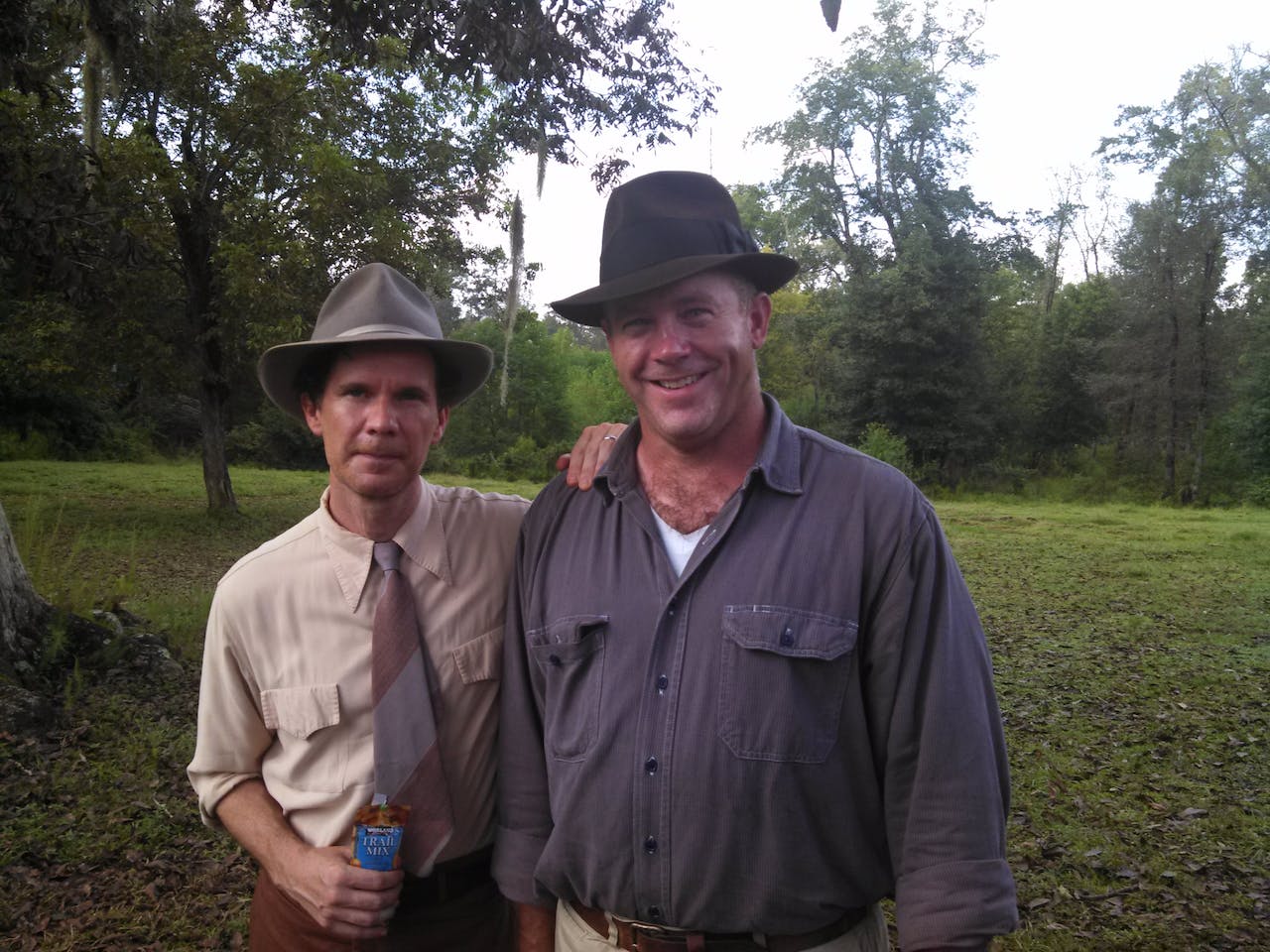 When “Trumbo” came out in 2015 several months after Christenbury had hauled the D6 to New Orleans, he took his father and his friend to see the movie at the local theater.

In the opening scene, Trumbo is looking out over a lake.

In the theater, Christenbury punched his buddy in the arm.

“We didn't make the cutting room floor,” he tells his friend. “They cut us out.”

“What do you mean?” his friend says.

“There’s that lake we were supposed to have built.”

Christenbury laughs while recounting the moment.

“So sure enough, they cut that out of the movie,” he says.

Despite all the work and being cut from the film, Christenbury enjoyed the experience. It was fun seeing the movie stars. It also helped that he was paid well.

He adds that he was in good company, noting that Bridgers met the same fate.

“His part got cut out of the movie, too,” Christenbury says. “So I didn't feel too bad.”

As for the D6, it’s fame for now is relegated to antique equipment events.

“We proudly take it to shows and demonstrate the machine, giving lots of new operators a chance at the controls,” he says. 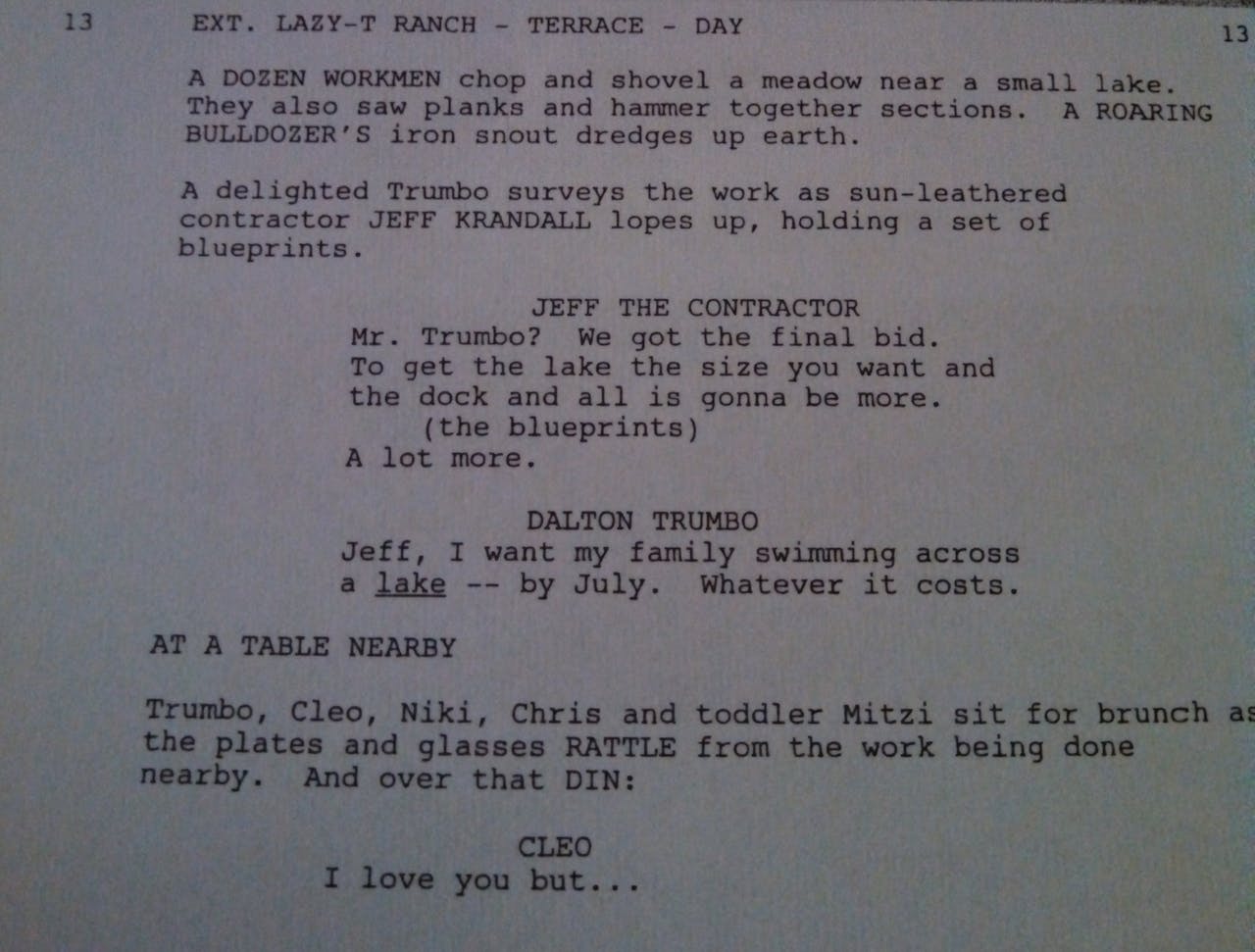 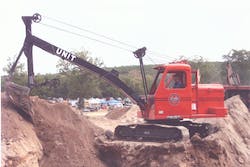 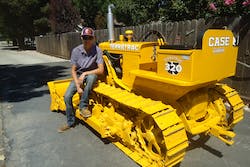 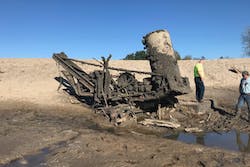