For being the fourth-largest city in the country, when it comes to construction, Houston, Texas, often operates like a small town. Everybody knows everybody, and that suits Alicia Jimerson just fine.

Growing up the daughter of a well-known and respected Houston contractor, Jimerson had no intention of going into construction. But as fate would have it, she started helping out in the office of her dad’s company, and after she graduated from college, she decided to try her hand at the business.

Rather than run her dad’s company, Jimerson hung out her own shingle in 1989 to take advantage of minority-owned business provisions. Soon after, she hired two skilled veterans, Tony Bonner as general superintendent and Tom Nugent as project manager. Today, she has 45 employees, runs a $7 million to $10 million business in Stafford, Texas, and is one of Equipment World’s 2021 Contractor of the Year finalists.

But her first venture into the world of bid letting didn’t go exactly as she had hoped. At a meeting with Houston’s biggest general contractor, “I got my ass chewed out,” she says. “He told me my numbers were good, but next time I came in with a bid, I had better bring some men with me, that if I didn’t, somebody was going to take advantage of me on pricing.”

Jimerson didn’t win the bid that day, but undeterred, she kept her head down and worked hard. “It was difficult to get doors to open up. And I don’t think I could have done it without the support of Tom and Tony,” she says.

From the start, Jimerson knew something many contractors learn the hard way, if at all. She understood the key to getting business as a small start-up was to build relationships, to meet your peers, shake a lot of hands and pass out business cards.

Just as the relationships developed in construction associations have been important to the success of Jimerson Underground, so has Houston’s Livestock Show and Rodeo. With more than 100 committees and 37,000 volunteers, it is the largest livestock and rodeo show in the world. It unites everyone from the city’s billionaire oil barons to multinational corporations, civic groups and local businesspeople in a common purpose – generating more than $500 million in scholarships for young people since 1932.

Jimerson joined one of the committees in 1989 and has steadily worked her way up to vice president. “You would be surprised at how many contractors are involved in the rodeo,” she says.

To keep up with the demand for its services, Jimerson hired Dennis Wolford in 2006 to add some bandwidth on the management side. He’s now the vice president and keeps all the different departments working together smoothly.

In addition to maintaining relationships outside the company, Jimerson Underground has done well by keeping its relationships with its employees strong. “Nurturing the relationships you have with the people who work for you is important,” Wolford says. “It’s not a one-way street. They work for us, but we work for them as well. The people who have been here 20 and 30 years know that.”

“Your employees are not just employees, they’re family,” says Jimerson. “Yes, you’re here to make money, but you’re also here to make sure their families are taken care of. That’s what families do, and the long-term employees know this is home.”

That focus on relationships and the skill and knowledge of 30-year veterans like Nugent and Bonner have impressed Nelson Blackwell of Vaughn Construction, an earthmoving general contractor that does business with Jimerson Underground. “They’re dependable,” says Blackwell. “They’re going to be there for you year-in and year-out. To them, it’s more than just the price on the bid. They’re the people you want on your team.”

The recession of 2008-2011 was a stark reminder of just how important this philosophy was to the company. Employees went without bonuses, and executives went without pay for a period, but the company got through it without resorting to layoffs.

One thing it did change during the recession was its philosophy about equipment management. Before the recession the company would run equipment “until the paint fell off,” says Jimerson. But the slowdown in work and the lack of cash flow made it essential to sell most of the assets that weren’t vital to the work at hand. Today, equipment acquisition and disposal decisions are much more strategic, says Wolford.

Jimerson Underground has also been rigorous about sticking to what it does best. On occasion it’ll do a bit of site work for a friend or longtime customer, but the core business is underground utilities – basic water and sewer installations.

“Our guys know water and sewer,” says Wolford. “From the office to the estimator to the permits to the field, everybody knows exactly what to do.”

Proof that this philosophy works comes from customer Falin Ishee at Turner Construction. “From the start it has been a positive impression,” Ishee says. “They are great to work with, from the office staff to the field. Utilities are always a pain to deal with, but they make it easy. They are one of the contractors who stand out.”

Having broken through the glass ceiling in one of the most male-dominated businesses in the country, Jimerson’s advice to those who want to succeed is essentially the same for men or women – build relationships.

It is essential to not just join your local construction and civic organizations, but to volunteer and get on committees in those organizations, Jimerson says.

“That’s how you meet suppliers and other contractors that you may work for someday,” she says. “Even if it's just a 5-second introduction and handshake, they will at least know who you are. Once you get involved, you’re going to get out of it what you put into it.” 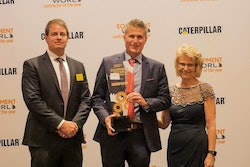 Deadline Extended: Contractor of the Year applications due Nov. 26 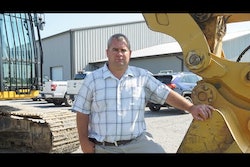 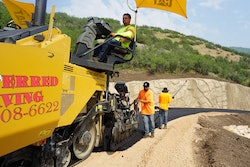 "We All Just Worked Our Guts Out": Contractor Pulls in $1.7M in First Year

The prototype 793 rigid-frame dump truck performed its first live demonstration on a 4.3-mile course while it was fully loaded.