At 9 years old, Jeff Fowler started working at a ranch baling hay and other duties. He would ride his bike 13 miles to get there.

“My dad brought me up to work,” says Jeff, now the owner of Pilot Rock Excavation in Central Point, Oregon. By 14, it was clear he had found his niche, and his mentors were telling him that he should one day go into business himself.

“I like to play in the dirt,” Jeff says. He worked for his mentor’s excavation company for 11 years and then took a role as an inspector with the local water commission. While inspecting a job for a contractor, the owner asked Jeff about buying him out.

Jeff and his wife, Alyson, president of Pilot Rock Excavation, can time the transaction based on their youngest son’s birthday in 2003, which was Jeff’s last day with the water commission. They’ve never looked back.

“I wanted to start small, but I didn't want to start with just a backhoe and a dump truck,” Jeff says. “I was used to doing pipeline jobs, and you need certain equipment to be productive and efficient.” Fortunately, the buyout provided the basic equipment including excavators, rollers, a dozer and a water truck to get the business off the ground. Despite Jeff knowing several developers from his time working as both a contractor and city inspector, the first few years were a struggle.

“I don't think we can point to any one thing that led us to success,” Alyson said. “It was just time and the daily grind and the hours that Jeff put in.”

From the early stages, Jeff was in the trenches 12 or more hours a day with his crew, and Alyson was in the background keeping the office together, first as the corporation’s secretary and now as president. “I was in the trenches because that's what I enjoyed doing,” he says. “I just couldn't let go. I wanted to have my hands on everything.”

Pilot Rock started with smaller municipal pipeline jobs, which is where Jeff thrives.

That driven attitude has led to his business thriving as he rubs off on his employees. Today, after 18 years, with a staff of about 25, Pilot Rock Excavation continues to grow, while maintaining the high quality of work Jeff and Alyson insist on providing.

“Unlike a lot of our competition, where they're more focused on being a pipeline contractor or a grading contractor, we do a little of everything,” Jeff says.

Pilot Rock manages three full crews and then has at least three different operations: a screen plant, the shop and the trucking operation. From an operational standpoint, Jeff manages all of that, while Alyson ensures the bills are paid and keeps track of the paperwork.

Although small, Pilot Rock manages a fleet of about 80 pieces of equipment ranging from excavators and dozers to rollers and skid steers. It also has 13 trucks for hauling equipment and materials.

The company has kept equipment debt to a bare minimum by paying it off quickly, allowing for future growth. It skimmed through the Great Recession of 2008-2011 and won’t be in the same situation next time the economy dips.

“It's part of our philosophy – we don't like debt,” Alyson says. “We don't like to owe anybody anything.”

The philosophy has helped them through leaner times, such as the recession, by having no extra bills coming through. “It’s something that we’re really proud of, and it has served us very well,” she says.

Most of the newer equipment includes software packages that can be downloaded through the dealers for monitoring telematics data. However, Jeff admits that he is not up to speed on some of that technology and does not use it to its fullest extent. “You know, you can either push papers or you can go get work, and I'm more a worker than a paper pusher,” he says.

For dispatching of trucks and overall fleet management, they have a dry erase board and stickers that show the dates of service and hours on each piece of equipment. Each machine and truck is on a routine maintenance schedule.

For unexpected issues, there are two mechanics on staff in the shop who complete nearly 60% of the maintenance and repairs, other than larger jobs or warranty work.

It’s really all about the people

No owner does all the work themselves, although in this case, Jeff might try if he had to. But with time and effort, the need came for Jeff to pull back from some of the grunt work.

Jeff and Alyson have been able to hire enough people to take on some of the jobs Jeff would normally handle, partially lightening his workload. Still, he prefers being in the field and jumping back in the trenches.

“I wouldn’t trade a single person on my crews for anyone else, though I could sure use more of them,” Jeff says. “That's always the key is trying to find more people.”

One caveat for those looking to work at Pilot Rock is that Jeff doesn’t hire operators. “I hire people that want to labor and then know how to operate,” he says.

According to Alyson, what Jeff is looking for is, in essence, another Jeff. He favors being hands-on in the trench versus in the equipment. He simply prefers to work hard. To this day, he doesn’t care much for running the equipment; he would rather be on the ground setting the pace for the job.

Even when he was supposed to be serving as an inspector for the city, he was more of a foreman. “I couldn't stand watching an unorganized mess, so I would just jump in and start barking orders,” he says.

Often due to Jeff’s drive to beat his own deadlines, the Pilot Rock crews get jobs done in less time than projected, and they receive bonuses when they do.

The job has changed a lot since Jeff started Pilot Rock Excavation. When he learned the trade, it was much more manual labor to install a pipe with ratchet and wrench. Now, the same pipe can be put together with reduced chance of injury or strain on the body by having the proper tools.

“Using the correct or new tools, whether it's the cordless tools or the attachments on equipment that make the job easier and more efficient, is always important,” Jeff says. “I'm always looking to buy the latest or the best thing to help speed up the job.”

While there is an upfront cost, he says, it’s always better than a worker’s compensation claim.

“How many times in the past have we jackhammered through a roadway when we can get a hydraulic hammer attachment for an excavator or backhoe?” Jeff says. “We've changed a lot as far as growing our tool inventory.”

Across many jobs, he says, clients and even other contractors are impressed with the efficiency of Pilot Rock.

Over the nearly 20 years in business, Jeff has few regrets.

“I don't live in the past,” he says. “I've always been that way. I just know that one day things are going to be better than they are now, and if we continue to improve our operation and mindset, we're going to improve the business and our lives as a whole.”

The company started out making $300,000 in annual revenue to now logging $5 million to $7 million a year. At its current pace, Jeff says Pilot Rock is nearly maxed out in terms of workload.

“We have enough iron; we just don’t have enough people,” he says. Generally, his total staff ranges between 20 and 28, with understanding that exceeding that means more office staff, which Alyson would like to avoid, for now.

“We can only take so many calls and so many bid requests,” Jeff says.

Perhaps it is the sign in Alyson’s office that defines the Pilot Rock Excavation experience best. It says, “I love it when you talk dirt to me.”

“I’ve always said dirt has been very good to us,” she says. “If you're not in this business, that wouldn't make much sense, but it sure makes a lot of sense to us.”

Pilot Rock Excavation was a finalist in Equipment World's 2022 Contractor of the Year program. The program recognizes contractors who display the highest standards of business acumen, equipment management expertise, attention to safety and community involvement. Each year, 12 finalists receive an expense-paid trip to Las Vegas to participate in roundtable discussions and an awards ceremony.

Nominations for the 2023 Contractor of the Year awards will open this fall. For more information, visit https://www.equipmentworld.com/contractor-of-the-year. 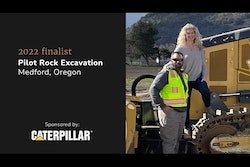 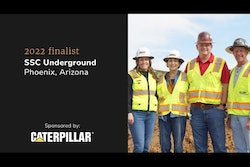 SSC Underground: From a Phone Tip to a $9M Business 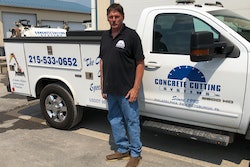