From a Man and a Mower to a Family Construction Firm

Located in Putnam Valley, New York, just down the road from West Point, Tompkins Excavating started with just one man and a lawnmower. But by bringing in the talents of his wife first and two of his three sons later, Mark Tompkins has set the company up for a supercharged future.

For that reason and more, it is one of Equipment World's 2022 Contractor of the Year finalists.

When Mark Tompkins was a young man, he had one goal – making money. When a landscaping job called for a small bit of site work, Mark rented a mini-excavator and quickly saw a much bigger future for himself in earthmoving.

The next leap forward came after Mark married Stacey. Early in their marriage, Stacey was the manager of a Wall Street corporate dining facility in New York City serving some 3,000 people and managing a staff of 30. That experience in logistics turned out to be excellent preparation for the future president of this excavation company.

Stacey quit the food service industry and took over the office functions for Tompkins, which allowed Mark to concentrate on the field. Working from a home office, she managed the books and administration but also did something many companies don’t do enough of. She served as Tompkins Excavating's public face, running for town board, attending civic meetings and keeping in touch with state government officials to make sure the company and its peers in the industry weren’t ignored in the legislative process.

Early on with just five employees, the company averaged $750,000 in revenue, but both Mark and Stacey felt it had room to grow. “We wanted to be in the $7 to $10 million range,” she says.

Stacey’s solution was to hire a business coach.

“Back during the Great Recession, we didn’t know where to turn, but some of our friends had been using business coaches,” Stacey says. “It’s hard to spend that money when you don’t have it, but we took a chance 11 years ago, and it paid off.” The company continues to use its coaching firm and harvests new ideas and insights from the other participants in their peer group.

Stacey says the company got three valuable insights from coaching.

Tompkins Excavating became a DBA about 10 years ago with Stacey as 51 percent owner. Stacey says owning your own business is a 24/7 responsibility. Compared to a corporate job, the challenges never go away, she says.

One of the challenges was forcing people into the meetings on the recommendation of their business coaches. Some people quit, says Stacey. But the people who bought into the idea found that the company got better at communication and production, and efficiency increased, she says.

If anyone was primed to jump into the earthmoving world with both feet, it was the couple’s first son, Kevin, who attended his first ConExpo at age 8. Kevin ran equipment and worked for his dad from an early age, and after getting a degree in civil engineering from Northeastern in Boston, he came back to work for the company full time three years ago.

Today Kevin wears a lot of hats in the company. He and a coworker rebuilt the company website from the ground up. And in addition to bids, takeoffs and jobsite management, he is focused on the future: looking for new business and building a good company culture.

“We want to make it a place where people want to come to work every day, where they want to be a part of the team and see the bigger picture and not just for the paycheck,” Kevin says.

Training has become another big emphasis for the company, says Kevin. “We have a handful of guys who came in knowing nothing, and a year later they’re excellent at what they do.”

Foremen conduct a lot of the training, typically short sessions once a week, sometimes no more than a five-minute video or a PowerPoint that relates to the jobs at hand, says Kevin. The company will also pay, up to a certain number of lessons, toward employees getting their CDL.

When it comes to training and advancement, the sky is the limit, says Kevin. “We give people a lot of freedom to take it where they want.”

If an employee wants to learn to weld, he or she can come in on a Saturday and practice alongside the mechanics. If they want to become an operator, same thing: show some initiative and somebody will help you learn those skills.

Tompkins started a homebuilding division in 2002 and has built about 40 single-family homes in the area and is now working on a multi-family development. The company does its own site work. Stacey has a real estate license, so it saves substantial amounts on project costs.

Their second son, Justin, also has his real estate license and is helping to develop that side of the business. He graduated from the University of Connecticut in 2020 with a degree in real estate and finance. In addition to heading up the real estate initiatives, Justin helps Kevin in the field and with job costing. “That’s a big thing we’re trying to implement,” says Justin. “Determining what we can do more efficiently, what we need to change, and where do we stand on a job – not just at the end, but every couple of weeks.”

Rounding out the trio of sons is the youngest, Michael, who is studying engineering at UConn and anticipates applying those talents to the firm when he graduates in 2024.

With all this talent on tap one might think Mark, who started the company with a single lawnmower, could sit back and coast, but that’s not how he rolls.

“Mark can see what’s wrong with a jobsite from two miles away,” says Stacey. “He’s smarter than most engineers you’ll ever meet, and he’s self-taught. He knows it better than anybody.”

Mark’s ability to master the details, no matter how small, is also essential to the company’s forward progress.

“About two years ago we did a deep dive into getting more efficient and productive,” Mark says. “Every year we try to figure out what are going to be the big rocks our company has to deal with. And efficiency is going to be it in 2022.”

“I love cutting-edge stuff, which is funny because I’m so old school,” says Mark. “I’m the guy who always wants the new technology. Back in 1988, I was the first person in this area to have laser automation and blade control on our bulldozer.” Since then, the company has jumped on every innovation that can add efficiency, including outfitting almost all its earthmoving equipment with GPS machine control.

That combination of old-school experience with next-generation ideas has customers singing Tompkins praises.

John Amato at Thalle Industries compares their finished projects to works of art:

“Tompkins stays ahead of the curve on using technology. Their use of electronics is a good lesson for any site contractor to work more efficiently. Their business model is also a tool that they use to coordinate all activities from bidding to job completion. Tompkins could teach an industry class on being a best-in-class contractor.”

Tompkins Excavating was a finalist in Equipment World's 2022 Contractor of the Year program. The program recognizes contractors who display the highest standards of business acumen, equipment management expertise, attention to safety and community involvement. Each year, 12 finalists receive an expense-paid trip to Las Vegas to participate in roundtable discussions and an awards ceremony.

The 2023 program will coincide with ConExpo-Con/Agg, North America’s largest construction trade show. Nominations are open now. Submit your entry by September 23, 2022 to be considered. For more information, visit https://www.equipmentworld.com/contractor-of-the-year.

Equipment World serves up weekly videos on the latest in construction equipment, work trucks and pickup trucks—everything contractors need to get their work done. Subscribe and visit us at equipmentworld.com! 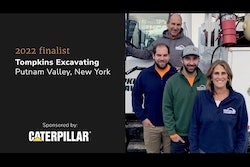 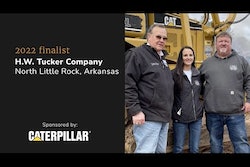 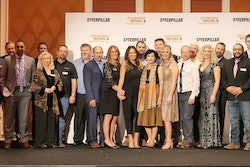 Nominations Open for 2023 Contractor of the Year award: Finalists Win a Trip to CONEXPO-CON/AGG