Manitou says its MRT (Manitou Rotating Telehandler) machines, which are compatible with a wide range of attachments like jibs, skips, wenches, access platforms and more, can be used as a crane, aerial work platform or as a telehandler.

With a lift height of 30 meters (105 feet), the new MRT3050 has a load capacity of 5 metric tons (11,000 pounds.) “This machine will suit any construction market requirement when it comes to quality, safety, price … and increased productivity,” says Laurent Bonnaure, Manitou VP sales and marketing.

Bonnaure calls the second new machine, the 24 meter lift height (81 feet) MRT2470, “the perfect compromise between compactness and high capacity.” Bonnaure says Manitou originally set out to design a 6 metric ton (13,000 pounds) machine. “But operators kept asking us for more and more load capacity. And our engineers have succeeded in increasing the load capacity from 6 metric tons to 7 metric tons (15,000 pounds),” Bonnaure says.

Manitou says the engineering breakthrough makes the MRT2470 the highest capacity rotating telehandler in the world. Development of the new machines, which feature a new chassis structure, took more than three years, the company says. The new chassis design integrates all of the hydraulic and electric lines into the structure.

Both machines are powered by Mercedes OM934 E4-5 Tier 4 Final engines providing 176 horsepower. The engines are paired with hydrostatic transmissions.

Thomas Chesnay, the product manager for Manitou’s MRT/MHT range, says the company’s pentagonal boom design boom offers more precision and more performance. Chesnay says all hydraulic lines on the new machines are fitted outside the boom for maintenance access and explains that the chains for extension and retraction are placed in the upper part of the boom to reduce its thickness. Chesnay added that the boom was designed around heightened reach capacity.

Chesnay says that the overall design of the machines was improved from previous MRT models as well. “The shape of the new counterweight is more fluid. The cover in the front of the cab is thinner in order to increase visibility int he front of the forks,” he says.

The new machines also feature a new stabilizer system and Chesnay says the stabilizers are the longest on the market, capable of extending up to 6.25 meters (20.5 feet). “The main innovation is in the detection of ground pressure. The stabilizers use strain gauges in order to inform bad ground contact,” Chesnay says.

Cab improvements include increased angle on the access door for easier entry and a new HVAC system that is more efficient and less noisy. 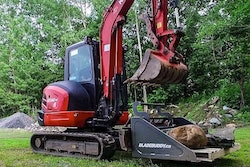 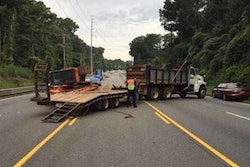 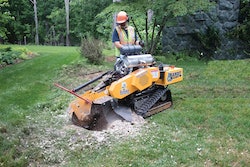