Mauldin intros the 1860, now its largest paver, alongside two other new Tier 4 models at World of Asphalt

Mauldin rolled out three new Tier 4 Final pavers at World of Asphalt, including its largest model, the 1860.

Geared toward commercial applications, the larger hopper means paving more between loads, said Brandon Granger, Mauldin marketing specialist, during the show on February 12 at the Indiana Convention Center in Indianapolis.

Mauldin also replaced the center console gauge display, moving all controls to the two individual operator stands. Each operator stand has a 5-inch display screen. The tracks have been upgraded from 12- to 14-inch track pads for better traction.

One thing the 1860 maintains is the company’s popular Silver 16 Screed, which is the heaviest in its class at 4,500 pounds. The weight means it can pack more material to a higher density, Granger said.

“That’s going to lead to less rolling time and better compaction right out from the screed,” he said. “This is a lot more efficient for the operator, less people working on the job, less rolling time.”

The next new machine in the lineup is the 1560, which will replace the 1550. Like the 1860, it comes with a new Tier 4 Final engine. At 74 horsepower, the engine does not require diesel exhaust fluid.

The 1560 also comes with an electric-heated screed with thermostat control. This means no more filling up propane tanks. “You just turn a switch on and it starts heating up,” Granger says. “It’s a lot safer and just much more convenient for the contractor.” With the thermostat control, you can set the temperature at the desired level and the screed will do the rest.

The paver also has a 5-inch digital display for the gauges, as well as to control the heat on the screed.

The smallest in the new lineup is the 650 paver with gravity-feed hopper.

It is similar to the company’s 550 and 690 pavers, but has a new Tier 4 Final 24-horsepower engine. It has the same controls as its sister machines. 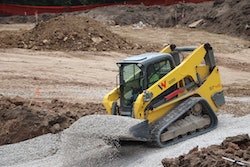 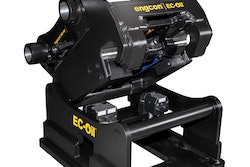 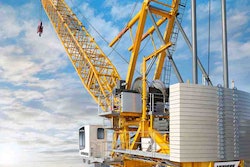