’Tis the forecast season and the general feeling is muted hope – except if you talk to contractors.

First, a look at 2019. When the final tallies come in, the Association of Equipment Manufacturers expects the construction equipment industry to have grown 3.9 percent – not bad, but definitely not the gangbuster 12 percent growth of 2018.

“In our informal snapshot surveys of the membership, we have seen overall indications of stability to slight growth in 2019 as well as in 2020, though there is little consensus,” says Dennis Slater, AEM president. “Most optimism that occurred in 2017 and 2018 seems to have evaporated.” The major concerns for the coming year: tariffs and infrastructure spending.

Despite all this caution tape, the results of a survey released mid-December by the Associated General Contractors indicates that contractors are in a full-steam-ahead mindset. Contractors told AGC they expected project value increases ranging from 8 to 25 percent in all 13 industry segments included in the survey.

“The bottom line is most contractors expect demand to remain strong, and in many cases strengthen, in 2020 despite signs the overall economy may slow or stall,” said AGC CEO Steve Sandherr during the release of the survey.

Although much more muted, the Associated Builders and Contractors’ forecast is also positive, saying there is continued momentum for construction next year, especially in public spending. Still, ABC is advising a wait-and-see approach because of “leading and lagging indicators and economic uncertainties.” The association’s Construction Backlog Indicator – which reflects projects under contract but not executed – remained virtually unchanged at 8.9 months from September to October, something that ABC Chief Economist Anirban Basu says is significant in light of these uncertainties.

On the transportation side, the American Road & Transportation Builders Association weighs in on the sunny part of the equation, predicting 5 percent growth in the transportation infrastructure market, fueled by government spending. The growth rate, however, will be less than 2019, which ARTBA says grew by 8 percent compared to 2018.

The big 2020 transportation question will, of course, be the reauthorization of the FAST Act, which expires on Sept. 30th. Jaded pundits predict time in Extension Limbo before the next version gets passed.

All this hemming and hawing means the inevitable ConExpo pulse-taking takes on even more significance: will they or won’t they buy? Let’s revisit that question at midyear. 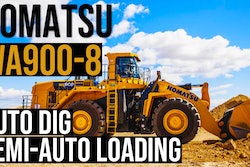 Komatsu WA900-8 Loader Does the Digging and Dumping For You 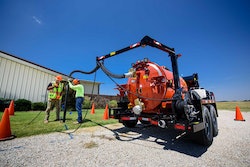