Though compact loaders continue to gain in popularity, standard wheel loaders are still a staple on the jobsite, thanks to their heavy-duty loading abilities.

But just as their compact equivalents are becoming more versatile and adding new technology, so too are these trusty workhorses.

The newest models are coming with such features as obstacle detection, tablet-like touchscreen displays and a variety of attachments.

Juston Thompson, senior product manager, Hyundai Construction Equipment Americas, says machines up to 3.5 cubic yards are more likely to be used with attachments such as mulchers, buckets with thumbs or grapples, and rakes. “Compared to compact equipment, small- to mid-size wheel loaders offer more capacity in these applications,” he says.

And speaking of buckets, one manufacturer has even come out with a “transparent” one, using advanced technology that enables the operator views into the typical blind spots.

For customers considering a wheel loader in addition to or instead of a compact loader, John Dotto, product application and training specialist, Wacker Neuson, suggests three key considerations:

First, is the wheel loader compatible with the attachment now in use or projected for future use?

Two, can you trailer a wheel loader, which is likely longer, wider and taller than a skid steer?

Three, given that the learning curve to operate a wheel loader is shorter than for a skid steer or compact track loader, is that an advantage for your operation? If you have frequent turnover and often have lesser-skilled operators, the relative simplicity of a wheel loader can be a real advantage.

Here’s a look at the latest models and features from some of the top manufacturers:

The 980 XE and 982 XE models have continuously variable transmissions, the first in this size class. The design uses a direct mechanical path from the engine to the wheels with a Hystat variator and can improve fuel efficiency up to 35%.

The 980 and 982 models have 1,000-hour maintenance intervals. Remote Troubleshoot allows remote diagnostics, while Remote Flash ensures machines are running the most up-to-date software. Customers can install updates at the best time for their operations through the Cat Remote Services Web Portal.

With Autodig, the entire bucket loading cycle can be automated, while Autodig with Auto Set Tires can significantly reduce tire slip.

Cabs on the new -7 Series machines from Doosan have 14% more glass, improved HVAC airflow and an adjustable 8-inch monitor with integrated rear-camera view.

Doosan’s Situation Awareness Technology (SAT) 2.0 monitors multiple systems to provide optimal performance and fuel efficiency. The operator can tap a button or push the accelerator past a detent to move up one mode (Economy to Normal or Normal to Power).

Doosan’s Transparent Bucket uses one camera mounted low on the frame and a second mounted high on the cab. Software stitches together the two views to enhance visibility in front of the bucket. The system also has object detection.

Transparent Bucket can be retrofitted to existing machines with a kit that includes a monitor and an electronics module that interfaces with the loader’s CAN bus.

“Doosan is working toward our Concept-X integration and automation of the worksite,” says Aaron Kleingartner, dealer and product marketing manager, Doosan Infracore North America. “Our Transparent Bucket feature fits right in with that.”

Also new is the tire pressure monitoring system that shows pressures on the display and issues an alert for out-of-range readings. Power modes have been reduced to two: Smart and Max.

“These features came from feedback from customers and dealers,” says Andrew Dargatz, product manager, Case. “The result is increased productivity and uptime with decreased operational elements that hinder performance and profitability.”

The AS1600 swing loader has been Mecalac’s only non-compact model. The company is now bringing its larger AS210 swing loader to North America.

The appearance of the AS210 is unlike other Mecalac models, more angular and less flowing. “It was always intended to be a machine for heavier-duty applications, and it looks the part,” says Peter Bigwood, general manager, Mecalac North America.

As with other Mecalac swing loaders, the AS210 provides 90 degrees of loader swing left and right, has a non-articulated frame, and three-mode, four-wheel steering.

“The AS210 brings extra capacity to applications where the swing design is especially helpful such as backfilling and road jobs where it reduces the need for lane closures,” Bigwood says.

Deere is introducing its performance tiering strategy with wheel loaders. The G, P and X tier progress from basic, economical machines through machines with improved performance and comfort to machines with the latest features and technology Deere offers.

As with its predecessors the 644K and 644L, the current 644 is an E-Drive hybrid with an engine-driven generator, an inverter, an electric motor and a PowerShift transmission specially optimized for use with the hybrid design. The 944K is also an E-Drive machine but uses four electric wheel motors.

Current Deere models 444 through 744 will be available in G, P and X tiers. “Those are recent models with no need for extensive modification to fit into Deere’s new tier structure,” says Luke Gribble, solutions marketing manager, Deere.

“Most wheel loaders are used as loaders and are designed to feed a process,” says Nathan Repp, product marketing manager of Komatsu’s WA200-8 through WA320-8. “However, all Komatsu loaders have optional auxiliary hydraulics for use with attachments and specialty buckets.”

Adam Brown, product marketing manager for Komatsu models WA320-8 through WA500-8, says the WA475-10 is the first of a new design and features the Komatsu Hydraulic Mechanical Transmission. The KHMT is a planetary gear design and provides stepless shifting. A dial sets a maximum travel speed while allowing full stroke of the accelerator for more precise control.

Other improvements include better ergonomics for the controls and switches, more glass area in the cab, and placement of the mirrors and rearview camera monitor at eye level.

Hyundai Construction Equipment Americas’ A Series loaders feature enhanced onboard weighing that displays what’s in the bucket plus what’s in the truck. Names and target loads can be assigned to individual trucks.

Optional Active Personnel Detection is now available on Liebherr wheel loaders to monitor the area behind the loader.

All LiuGong wheel loaders have third-spool hydraulics. Smaller models are plumbed to the end of the loader arms because they use quick connects, which require hydraulics.

Larger machines, which use pin-on buckets, are plumbed to a midpoint on the arms. Pilot controls are used for lift and tilt while an electrohydraulic thumbwheel controls the third valve. The company’s two largest models, the 877H and 890H, are fully electrohydraulic.

Chang says new model introductions usually coincide with emerging emissions regulations. Their current Tier 4 Final models came to market in 2016 and are being replaced with European Stage V machines. Because there is no U.S. equivalent to Stage V – that is, no Tier 5 – there is no deadline for introduction and therefore no urgency to bring these models to market.

“This gradual rollout allows us to implement the change to best benefit LiuGong, our dealers and our customers,” says Chang. “All our North America wheel loaders will likely be Stage V machines by 2023.”

Boom kickout and return-to-dig are key features on Volvo loaders. Boom kickout height is set by the operator and is operated with a single stroke of the lever.

Return-to-dig puts the bucket at the same position, again with a single lever stroke. Control sensitivity can be set to Soft, Normal or Active.

Wacker Neuson puts a universal skid-style plate on smaller loaders, allowing attachments to be changed from the operator’s seat.

As the name suggests, this mounting plate is compatible with a range of attachments and work tools used with skid steer and compact track loaders.

Yanmar has one model in this size class, the V12. Its rubber-mounted cab includes HVAC, extra high-back suspension seating with lumbar support and two doors for easy access.

The joystick provides third- and fourth-spool controls. A central lubrication system is available.

Takeuchi also has one model in this range, the TW95. Features include a cab with air-ride suspension seating, two-speed travel and an inching pedal.

“We make all our wheel loaders comfortable and easy to operate since many are purchased by owner-operators,” says Lee Padgett, product manager. 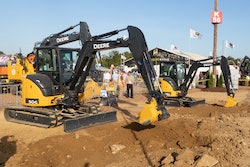 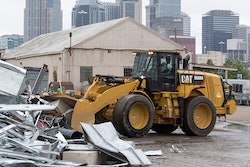 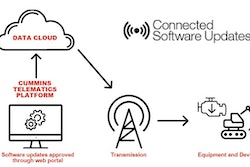 Cummins: Check the Health of Your Engines Anytime, Anyplace