Richard Ries (EQW)
Jan 13, 2022
One of the latest changes in the ADT world is the rebranding of Terex Trucks to Rokbak.
Rokbak

Artics now come equipped with such features as pedestrian detection, automatic systems to increase traction and to reduce speed on hill descents, and assisted hoist for reducing some of the repetitive motions of dumping.

Here’s a look at what’s new and improved with artics.

Autonomy: ‘not merely a concept’

Nick Kyriacos, ADT product marketing manager with Bell Equipment, said the company has worked to integrate responsibility to the environment, to society and to the customer.

“We’re part of a green revolution but we’ve found ways to serve both the environment and the customer at the same time,” he says.

All Bell trucks run on Mercedes-Benz engines and Allison transmissions to maximize production efficiency while also adding the convenience and cost-effectiveness of commonality to their line.

Similarly, the company uses providers for its autonomous systems rather than develop its own.

In North America, it uses Pronto AI. The pedestrian detection system is also outsourced. The key to integrating these systems is sophisticated and adaptable electronics.

“To demonstrate the power and flexibility of the circuitry on our trucks,” says Kyriacos, “we operated a truck with an Xbox controller at distances of up to 20 meters.”

The same sophisticated technology is what makes “autonomous operation a fact, not merely a concept,” says Robin Pett, product manager. “We have sites in the U.S. where all the machines are communicating with each other. Even a pickup that drives onto the site has a communication beacon.”

Autonomous operation improves efficiency, says Kyriacos. “Suppose the site design and loading tool dictate that 3.2 trucks is the optimal number of trucks to have. With three trucks, the loader operator sits idle at times. With four trucks, the truck operators sit idle. Autonomous operation manages truck speed and other factors to eliminate unnecessary idling by anyone, to save fuel and wear and maximize productivity.”

Payload monitoring has been standard on Bell trucks since 2002. The system now includes inclinometers to compensate for the pitch of the truck while loading because pitch can alter the pressure on payload sensors.

The inclinometers also help with hill assist and hill hold. With hill hold, for example, the system knows the pitch and the load and determines the torque required to create movement under those conditions. The system will not release the service brakes until sufficient torque is provided to the wheels, which virtually eliminates rollback.

Caterpillar has had Automatic Traction Control since 2011. Cat doesn’t apply the service brakes to the slipping wheel; doing so creates unnecessary wear. Instead, the system varies the oil flow to the clutch pack in each wheel motor to control slip – more oil, more torque; less oil, less torque.

Automatic Retarding Control is fully automatic. Sensors tell the system if the truck is going downhill, the gear position, speed and whether the truck is loaded.

When the operator’s foot comes off the accelerator on a descent, the system engages ARC at the level dictated by conditions. If more slowing power is needed, ARC will apply the service brakes and, if needed, execute a downshift while still protecting the engine from overspeeding.

Stability assist sounds a continuous alarm if the side slope exceeds 15%. The percent of grade needed to trigger the alarm can be set by the operator. It will also inhibit hoist actuation under these conditions. Stability assist is on all models from 725 through 745, including GC models.

If the truck is stopped or traveling less than 2 mph and the driver engages assisted hoist by the feature’s fingertip control, the truck will automatically shift to neutral, apply the service brakes and raise the bed. Assisted hoist is available with the gear selector in any position.

“Assisted hoist takes the drudgery out of a repetitive operation,” says Thomas.

Doosan continues with its proven design on its DA30-5 and new DA45-5, which replaces the DA40-5. Among the key features is a forward-mounted turning ring that minimizes any tendency for the truck to push forward instead of turning when loaded and better balances payload in turns. The sloping rear frame also helps distribute the load.

The free-swinging tandem rear bogie remains in use. The design yields better tracking in extreme terrain and, with a single-drive axle, has fewer moving parts than other designs. Tractive force is so good that drivers can back farther up a pile before dumping, “in some cases eliminating the need for a dozer to build the pile,” says Aaron Kleingartner, dealer and product marketing manager, Doosan Infracore North America.

Limited-slip differentials and a lockable interaxle differential further improve traction. The hydraulic retarder engages automatically and can be set by the operator in 25% increments.

Kleingartner says the use of telematics, such as DoosanConnect, has matured. Once relied upon for simple tasks such as geofencing and recording fuel use, telematics are now used in real-time to monitor and improve productivity.

“We continue to advance in that direction as motor and battery designs improve,” says Kleingartner. Doosan also continues to develop its Concept-X platform of the autonomous jobsite.

First of the new features is a common dump body. In the past, customers had to specify whether they wanted a heated or non-heated body setup. Now all Komatsu articulated truck bodies come with exhaust heat channels installed from the factory. The customer still specs the desired body setup when ordering, but bodies can be converted at any time with an exhaust reroute kit. This is especially valuable for customers who move into colder markets with their existing trucks; it also increases residual value in the secondary market.

The second new feature is the Automatic Retarder Accelerator Control. All slowing is done using the service brakes; there is no engine brake or transmission retarder.

ARAC engages at 4.3 mph on descents when the operator’s foot comes off the accelerator. Oil flow is increased to the brakes when ARAC is activated.

Before ARAC, the operator maintained speed using a manual retarder lever; that lever is still in place and allows the operator to increase slowing effort above what is provided by ARAC when needed.

The first of the two existing features Hussey wants to emphasize is the Komatsu payload meter. It was optional on previous models and is now standard on Dash-5 trucks.

“The system is more advanced than it is generally given credit for,” says Hussey. “It provides a lot of data to a lot of people seamlessly, simultaneously.” Information is provided via the in-cab monitor, indicator lamps mounted on the truck, and Komtrax telematics to the truck operator, the loader operator and management, respectively.

The load lights are green, yellow and red but can also be off, flashing or steady. The optimal load is when the green and yellow lights are steady on, and the red light is flashing.

The payload meter system controls the lights based on the effects on payload of previous passes from the loader in the current loading cycle. The system resets at the dump cycle. Payload information is transmitted after the truck has traveled 525 feet, to provide more accurate data; that standard is user-settable for sites with shorter haul distances.

Hussey also calls attention to the Komatsu Traction Control System, which uses the service brakes for controlling wheel slip. This reduces tire wear compared to locking differentials. There is a locking interaxle differential that can be set to engage automatically or manually as conditions require.

“Managing brand names is common at Volvo,” says Scott Pollack, senior product manager, Rokbak. “We wanted a unique name while at the same time carrying forward the long history of technology and innovation established by the Terex Trucks brand.”

The standard Rokbak warranty in North America is three years, 3,000 hours, and three years, 6,000 hours on the powertrain. A maintenance plan and Haul Track telematics subscription are available on registration; each is for three years or 3,000 hours.

Other features include on-board weighing as part of the optional Haul Track telematics package and inclinometers on the dump body to help prevent tip-over.

A new quick-fit system enables cleaner, faster oil changes. New handles on both sides of the counterweight make service points easier to access. Improvements to PM practices will cut maintenance costs and scheduled downtime up to half without compromising component performance or longevity, the company says.

A tire pressure monitoring system is now standard on Volvo A35G, A40G, A45G, A45GFS and A60H haulers; it is optional on the A25G and A30G. Tire information is shown on the Volvo Co-Pilot in-cab tablet display.

TPMS is a good tool, but proper tire management starts with tire selection, says Eric Fatyol, product manager, articulated haulers, Volvo Construction Equipment. “You’ll typically replace all six tires at one time, and selecting the right size for your application is important, especially when it comes to standard versus high-flotation tires.” 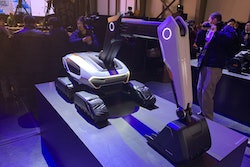 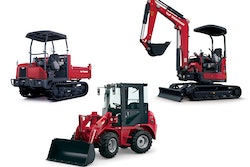 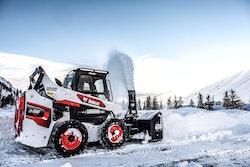 Bobcat Expands Features on Demand to all R-Series Loaders