Taming the Motor Grader: The Right Technology for a Complex Machine

Richard Ries (EQW)
Feb 22, 2022
The Case 836C and 836C AWD have operating weights of 24,466 and 27,128 pounds, respectively. Power comes from an inline six-cylinder, turbocharged engine rated at up to 156 net horsepower. The 836C is designed to be easy to operate and well suited for small to mid-size grading applications, such as residential site prep, snow removal and municipality work.
Case CE

Conventional wisdom holds that motor graders are the most demanding of all machines on the jobsite. So it would seem graders would be first in line for technological advances to make operation easier. Often they are, but it’s not necessarily because they are complicated machines.

“I think as an industry we tend to overplay how difficult it is to operate motor graders,” says Nathaniel Waldschmidt, product manager at Case Construction Equipment. “Yes, it takes time and effort, but graders can be learned and mastered just like any other machine.”

Machine control is one of those technologies fit for a grader.

Case has two models in its grader catalog, the 836C (shown above) and 856C, and each leaves the factory ready to run machine control, says Waldschmidt. “Between graders and dozers, it’s these applications that machine control was really made for.” The factory prep allows easy integration of systems from Leica Geosystems, Topcon and Trimble.

Each of the eight G Series models in John Deere’s lineup is available as a Grade Pro model, designated as GP. Among the host of automated features in Grade Pro are Auto-Articulation and Auto-Gain for Cross-Slope, plus Machine Damage Avoidance to prevent the blade from damaging the grader’s tires or ladder.

The Machine Presets function allows operators to program multiple functions into one button. To prepare for roading the machine, for example, one button tap can straighten machine articulation, raise and rotate the blade to its stow position, raise the rear ripper, activate the hazard lights and beacon and enable Auto-Shift.

The Auto-Shift Plus transmission allows the grader to come to a full stop in any gear without the use of the clutch and to restart with a press of the throttle. It also does away with the need for an inching pedal and performs automatic shifts in gears four through eight while roading.

SmartGrade is Deere’s latest tech advance. It is a fully integrated, mastless system that maintains accuracy while allowing the operator to control articulation, blade pitch and wheel lean as required.

The GD655-7 comes configured for easy installation of the Topcon 3D-MC2 system. Standard steering includes both a steering wheel and armrest-mounted steering lever to match applications and operator preferences.

Experienced grader operators are rightfully proud of the complex skills they have developed over the years. So how welcoming are they of technology that simplifies grader operation?

“An expert operator will appreciate the tools that make tasks easier by automating some functions, so operators can focus on results and what is happening around them,” Repp says.

He adds that few, if any, other types of equipment have as many degrees of freedom as a grader, and automating some functions allows highly skilled operators to focus on tasks that demand their high level of skill.

Product application specialist Erik Kohout says Cat’s use of technology has been a three-fold development.

Levers were first; they were straightforward to use, and operator efficiency improved as muscle memory deepened over time.

In 2018 the Next Gen machines arrived with the choice of levers or joysticks.

“Some operators, especially those with more experience, prefer the low effort of joysticks,” says Kohout. “Sometimes the preference is based on application.” Rough cutting favors levers, while finish work is best done with joystick controls.

A caveat: “Those new workers still need to learn to manage material and to understand how what they do fits into the total site.”

The 140 GC, for example, comes with a standard seat; upgrades have mechanical or air suspension. Customers can move up from the base cab to a cab with HVAC or down to a canopy. ROPS/FOPS is optional. An on-demand fan is standard and a reversing fan is optional.

A no-spin differential is standard, while all wheel drive is an available option.

How important is AWD?

“It offers 40% more tractive effort than rear tandem drive,” says Kohout, “but also has higher initial and ongoing costs. The question is, does the boost in productivity offset the higher costs?”

Cat’s AWD provides steering speed compensation to minimize tire scrub in turns. On non-GC models it allows all drive to come from the front wheels only at speeds up to 5 mph, minimizing disruption of the finished surface.

Here again Kohout offers a word of warning. AWD emboldens some operators to run their graders like dozers, which they are not.

Repp points out that the majority of grading operations are performed with rear drive, even on graders with AWD.

“For a system that gets used only part of the time, there’s a lot of additional cost, wear, fuel consumption and maintenance.”

AWD does have its place in certain situations, “but it is not really needed the majority of the time. Justifying AWD comes down to how much additional you’re willing to spend and if it is actually required for the job at hand.”

Deere offers an optional Premium Circle on all graders with a sealed bearing and pinion for reduced maintenance costs and less downtime.

The design eliminates the need to adjust and replace wear inserts and provides 40% more circle torque and 15% more speed compared to the standard circle. The only required maintenance of the Premium Circle is to grease the bearing every 500 hours.

The saddle can be hydraulically set to five positions. Gooseneck geometry allows the operator to rotate the moldboard over 90 degrees for each working side with no mechanical interference.

Kohout says the key to efficient snow removal with a grader is the proper outfitting.

“Do you need a trip edge? Do your LED lights run hot enough to prevent icing of the lenses? Do you have the right beacons?” he says contactors should ask themselves.

“Graders are highly configurable for snow removal so make sure to do your homework.”

Dump trucks equipped with plows have the advantage of spreading deicing chemicals or grit while plowing, says Waldschmidt, but graders offer much better visibility to the clearing area. Graders are also more agile and, when equipped with snow wings, are better at shoulder clearing and moving snow farther off the road.

“Motor graders are wildly underrated for their efficiencies and capabilities in snow removal.” 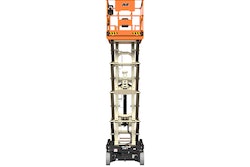 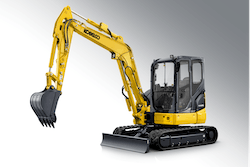 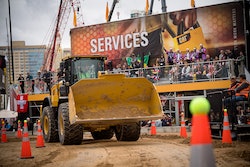