Richard Ries (EQW)
May 13, 2021
The smallest of the three crawler skid-excavators in the Mecalac lineup, the 6MCR has a Deutz engine rated at 75 horsepower. Operating weight is up to 13,500 pounds. Maximum dig depth is 10 feet 1 inch. Tailswing radius is 3 feet 10 inches. Travel speed is up to 6.2 mph. All three crawler skid models will accept both excavator- and loader-style buckets, as well as forks.
Mecalac

Is now the right time to buy a new compact excavator?

While our OEM experts were naturally enthusiastic about buying new, they did offer these pointers on when and how to take the plunge.

Dan Collins of Kobelco says 10,000 hours is about the point when repair costs dictate replacement, but given the typical annual hours on a compact excavator, it can take a long time to accrue that many hours.

“The broken booms and sticks and cracked frames that we saw 20 years ago are long gone," he says. "Newer machines are more robust, and most of them probably have hours remaining. But they lack the features and technology of the latest machines, and that’s a serious shortcoming.”

He says that in this extremely competitive market, manufacturers race to add features to stand out, and the customer benefits.

Jay Quatro, commercial product manager with Wacker Neuson, cites the three-point bucket linkage on the its new ET42. “It’s the same linkage as is found on our larger models. The unique kinematic linkage system offers a 200-degree angle of rotation that combines excellent breakout force with a greater range of motion.”

The result is greater vertical digging depth, especially next to walls, and more rotation to keep the load secure before dumping, he says.

“In times of uncertainty or in recessions, the strong, diverse and well-balanced companies thrive,” adds Greg Worley, market professional with Cat. “You need to make sure you have the equipment and other resources to meet the challenges.”

He says new machines are always going to be more efficient and versatile than preceding models. These advances bring benefits to all customers but especially those in production applications.

“At this time the only reason to hold onto a piece of equipment," he says, "is if you have difficulty in obtaining a replacement, especially given the global manufacturing and logistics challenges.”

Manufacturing processes have advanced. Metallurgy is refined. Bearing design and placement are improved. And, says Jonathan Tolomeo, product manager, Komatsu, clearances are tighter. “Those tighter manufacturing tolerances and the new oils designed to work with them have resulted in machines that should have much longer service life, which reduces total owning and operating costs.”

More versatile than ever

Compact excavators have grown to be among the most versatile machines on the market. There are two sides to this versatility – the attachments and the excavators themselves – and they need to be properly paired to achieve maximum benefit.

He says no dealer has every available attachment, and finding the right tool may require shopping around. One key to compatibility is pin diameter. "Make sure your coupler or pin grabber is compatible with the pin diameter of the tool you're considering." Other key considerations include hydraulic specifications, center of gravity, balance and counterweight, with the latter three all interrelated.

For clearing and forestry, for example, the excavator can have a hydraulic coupler, hydraulic thumb and high-flow mulcher attached at the same time, Kramlich says. Changing attachments can be done from the safety and convenience of the cab.

Kurt Moncini, senior product manager with Komatsu, says the PC88 has a thumb bracket and two-way hydraulics. It also has a swing boom and is a minimum-radius machine where the counterweight stays within the tracks. Its improved blade design makes it more efficient for backfilling.

Compact equipment is often seen as a replacement for hand labor, and “any time I can take a tool out of the hands of a worker and replace it with an attachment on a compact excavator, I win,” says Moncini.

At the same time, he says, recognize that the “versatility of the compact excavator is a path out of being pigeonholed as a contractor.”

Sho Aoe, portfolio manager, Link-Belt, notes that versatility applies not only to what compact excavators can do but also to where they can do it. “The ability to work in a confined area is a huge advantage.”

People have been staying home; many will likely continue to work from home and are eager to make improvements to their property. “There’s a lot of work in people’s back yards,” says Aoe.

Erik Coyle, product specialist, Yanmar, says attachments are in high-demand for Yanmar. Its models from the SV40 to the SV100 have second auxiliary circuits available; they are standard on the ViO80-1A and SV100-2A.

“Mini excavators aren’t just hydraulic shovels anymore," he says. "Be versatile in your offerings by having the right attachments for any job that comes along.”

“A good rule of thumb is to consider the work you’re doing now with regards to lift, reach, dig depth and operating weight and try to spec a machine with approximately 25% more dig depth," he says. "This will increase the other key specs to provide enough machine to allow room for growth in your business.”

“Today’s machines are more capable than the previous models in the same size class. Today’s 6- and 8-ton models can do work that would have required 12- or even 14-ton machines not long ago.”

In the end, it all comes down to specs, but don’t assume the specs you need will require the size class of machine you’ve used in the past.

Some OEMs are redefining the compact excavator.

Mecalac offers two models of wheeled compact excavators below 10 metric tons, the 7MWR and 9MWR. “Among the appeals of wheeled models are roadability and increased stability, especially when lifting over the side,” says Peter Bigwood, general manager, Mecalac North America.

The company also offers three crawler skid-excavators with travel speeds up to 6.2 mph and the ability to mount traditional excavator buckets as well as loader buckets and forks. All models feature Mecalac’s three-piece arm (two-piece boom plus stick). The company partnered with Rototilt to provide an integrated tiltrotator from the factory that retains the advantages of the Mecalac quick-connect.

“We know that Mecalac is a premium-priced machine,” says Bigwood, “but our one machine can do the work of several due to our three-piece arm and, with our crawler skid-excavators, the ability to use both excavator and loader attachments.”

And Volvo’s electric model, the ECR25, uses lithium-ion batteries and a single electric motor to run the hydraulic system. Fully charged, the batteries provide enough power for 8 hours of use in typical applications.

“Early adopters of electric equipment will establish themselves as leaders in this rapidly growing market space,” Ashton says.

Versatility is good, but today’s compact excavators are also better at what they were originally designed to do: dig.

“Owners who are not planning on purchasing new attachments can expand into other markets using standard-configuration machines,” says Patrick Baker, product manager, Kubota Construction Equipment. Those markets can include residential and commercial construction, municipal jobs, hardscaping and landscaping, road and highway work.

"Build a good reputation and solid working relationships in one area and be willing to take chances on new opportunities,” Baker says.

Ryan Anderson, product marketing manager, New Holland, says that compared to other compact equipment, compact excavators are especially well suited to use precision tools such as lasers and depth checkers. “These will make you better and faster at the work you already do and will open up new jobs for you where you can use your existing equipment.”

He says that demolition is a growing market and not just large demo projects, such as commercial buildings and malls, but also smaller buildings such as barns and homes. The extent of investment may be a specialty bucket or thumb if the excavator is not already so equipped.

Ways to get into a new machine

Hitachi introduced its ZX-tra monthly payment offer on ZX26U-5, ZX75US-5 and ZX85USB-5 models. The ZX26U-5 is available with cab or canopy, while the other two are cab-only. The three models cover a range of machine specs and meet the needs of a variety of customers.

Buying machines coming off lease or rental is a way to reduce front-end costs while still getting new technology and features and a factory warranty. But the availability of these machines relies on turnover.

“We saw some interesting trends with rental shops last year,” says Jason Boerger, marketing manager, Bobcat. “Most significant was a reluctance of rental businesses to purchase new equipment. That makes perfect sense in view of the volatility on a global scale caused by the pandemic.”

The market is recovering. He says the key to a successful rental business is to control operating expenses, and compact excavators, with their low initial and ongoing costs and ease of transport, support this practice.

Watt says only 10% of LiuGong compact excavator sales go to end users; the rest go to rental. The company says that rental constitutes nearly 50% of the U.S. construction equipment market and that more than 75% of products priced at greater than $100,000 are rented before they are sold.

Kleingartner says rental took a hit in the early months of Covid. The rental market is rebounding, but because rentals were down for part of last year, replacement rates have slowed and OEM sales into rental have slackened temporarily.

Despite fluctuations in the market, the contractor’s rental strategy is unchanged, he says. It includes renting niche machines and using long-term rentals for specific jobs.

Contractors can also consider a rental purchase option. Most rental houses will let the customer move to an RPO at any point in the rental term; it doesn’t have to be a stipulated agreement up front.

“Managing the role of rental to the business is the same as always,” says Kleingartner. “It comes down to profit and efficiency.” 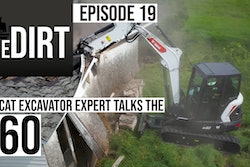 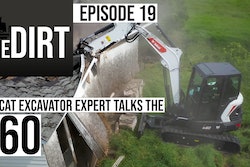 Video: Bobcat's E60 Changed the Face of its Excavator Lineup | The Dirt #19