Don McLoud
Oct 20, 2022
Attendees at this week's Kubota Connect got a first glimpse of the new SVL75-3, the company's next generation of the top-selling compact track loader.
Equipment World

Kubota unveiled the next generation of its top-selling SVL75 compact track loader this week.

The SVL75-3 comes with a host of new features and improvements for easier operation, maintenance and efficiency. It made its sneak-peek debut at Kubota Connect in Grapevine, Texas, attended by 3,000 Kubota dealer representatives from all over the country who came to see the company’s latest products and innovations. (To watch a demonstration of the SVL75-3 in action, check out the video at the end of this story.)

In rolling out the third-generation CTL, Kubota focused on operator comfort and functionality, said Tom Turner, product operations manager. It is expected to hit dealerships in May after its official launch at ConExpo 2023 in March.

The improvements begin with more car-like features in the cab. There’s a new 7-inch color touchscreen and keyless push-button start. The start is password protected.

Operators can make all their settings on the touchscreen as well as watch vital signs such as fuel level and operating temperature. It displays the new standard rearview camera.

“It's just like your car, your pickup truck now,” Turner said. “That's what users want. That's what they expect in equipment.”

Kubota also left a jog dial available for times when you might not want to touch the screen. The cab is Bluetooth-enabled and has a microphone for answering phone calls.

Kubota made the cab all once piece for pressurization to seal out dust and noise. Also new, when you raise the cab for maintenance, the entire cab including the floor goes up.

“There is plenty of room in there for people to sit down in there,” Turner said of the opened up compartment.

The CTL comes in enclosed cab and ROPS options.

The controls are backlit and better labeled for evening work and for helping less experience operators get adjusted. Kubota also added LED lights at all four corners outside the cab.

Standard on the CTLs is a rearview camera that can be adjusted from the cab to move up, down, left or right. Its view is in the monitor and can be set to operate full time or only when operating in reverse.

Kubota made all of the controls in the cab easier to get to. The climate controls that were located under the arm bar have been moved for easier access. There is a cupholder and USB outlet.

The lights’ shut-off on the machine can be delayed via timer so the operator can still see when exiting the cab when it’s dark out.

Kubota also kept controls and functions in a place where operators don’t have to move their eyes from their work to see them. “We pride ourselves on really never having to take the operators’ eyesight away from their working and operating,” Burroughs said.

Changes to the rear

Kubota opened up the engine compartment by putting the fuel tank on the inside of the rear door. That can also add counterbalance for the machine. The fuel tank can be locked.

For even more weight, Kubota added optional 50-pound ballasts on each side at the back of the CTL.

The optional reversing fan was also relocated to the top rear of the machine for more service space. It can be controlled from the cab. The operator can set time intervals for automatic cleaning or can manually operate it.

When turning around in their seat, operators will now get a better view out the back, as Kubota raised the crossbar.

Kubota also added a feature from its larger SVL97 by putting a new pre-cleaner on the rear of the SVL75 to improve performance. The new track pattern on the SVL75 is also similar to the SVL97 to improve traction.

The SVL75-3 comes with a new track response system, which has three settings: mild, normal and quick.

The mild mode will restrict track response for working in tighter spots near object. “You have a little bit more give in that joystick before the machine starts moving,” Burroughs explains.

For those who want faster response, they can kick it into the quick setting. “Some of our operators like to get in there and go from the moment they get in,” he says.

Another new feature for the SVL75 is auto-downshift. When activated, it will automatically shift the CTL into a lower range for easier turns. After the turn, it resumes higher range.

The SVL75 now also comes with self-leveling, which the operator activates, for such tasks as unloading pallets.

The CTL also gets a boost of a couple gallons per minute in hydraulic flow in standard and high-flow settings. For attachments, multifunction grips and 14-pin connectors are standard on high-flow models and an option on the standard loaders.

Watch it in action

Check out this sneak peek of the SVL75-3 in action at the Kubota Connect event:

To view a video demonstrating the new one-piece cab and how it opens up to provide more space for technicians, watch this YouTube Short.
Related Stories 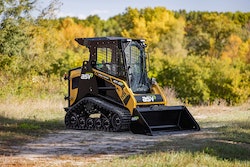