After Delays, Kioti Sets Launch of Its First CTL and Skid Steer

Kioti will be formally launching itself into the compact construction equipment market with the release of its first skid steer and compact track loaders in the first half of 2023.

The Daedong-owned brand, which has been a fixture in the hobby farm market with its compact utility tractors, introduced its dealers to the concept of entering the compact construction equipment market in late 2020.

Design changes, supply chain challenges and the pandemic set back the official debut of the machines, originally slated for early 2022.

A key component for Kioti is that the new machines are designed, engineered and manufactured by the company. Kioti has emphasized that it is not privately labeling anyone else's machines.

"The design, engineering and manufacturing, everything is being done in-house," said Jason Boerger, Kioti product manager. The company's goal is to bring a product to the market that will benefit its customers at an affordable price. At the 2022 Equip Expo in Louisville, Boerger said there were just a few things to line up before the SL750 and TL750 hit the market in 2023.

“The machines themselves, the design, everything is pretty well raring to go,” he said.

Pricing on the new machines is still being finalized, but Boerger said Kioti would be aggressive and competitive.

At the heart of the Kioti loaders is a 4-cylinder 74-horsepower Daedong engine, the newest engine entrant among CTLs and skid steers, competing against such established compact engine manufacturers as Yanmar, Kubota and Kohler. Almost all Kioti's under-75-horsepower products, except for the zero-turn mowers, have Daedong engines. Engine software has been updated to include an anti-stall function.

All specs remain preliminary; however, the 74-horsepower compact track loaders and skid steers will be positioned mid-range in both markets. Preliminary specs have the TL750 CTL weighing 9,315 pounds, and the SL750 skid steer has an operating weight of 8,157 pounds.

“A lot of the specs will look very similar to some of the things you see in the industry, but we always try right out of the gate to one-up each other and come up with a new model," Boerger said. He cited the Kioti lift heights to the pins of 126 inches as the spec that sticks out compared to some other brands.

“The theory that we're working with is we're trying to be very competitive due to being a new entrant into this need space,” he said. “Part of that is we're just going to offer a lot of standards."

For example, the layout of the control buttons was shifted so it lines up with what's common within the industry, geared toward potential rental customers.

"We kept that in mind when looking at this from a rental perspective," Boerger said. "As a rental customer is jumping in from one to the other, or a customer needs to rent for a short time, they're not going to jump in this and be completely lost." If someone owns a Bobcat, Case or Cat loader and a short-term rental, generally everything will be the same if they rent a Kioti machine.

“We kind of took a look at it from the perspective of how can we make this as simple as possible and try to match the industry the best we can,”  he said.

Plans are to offer open and enclosed cab versions of the two machines. The enclosed-cab machines would include several standard items including front and rear LED lights, two speeds, self-leveling, a hydraulic pilot joystick, an in-cab display, a suspension seat. From a comfort perspective, Kioti is going with a roll-up style door, which Boerger says customers requested.

“We've gotten a lot of comments on the door, which might not look like anything, but just overall, it's a lot easier to use,” he said. Also, those who have seen the machines have noted the overall size and roominess of the cab.

"A lot is going on this cab," Boerger said. "There's a lot of space in there and a lot of foot room."

The display in the cab has access to a rearview camera, so operators can see what’s going on behind them when backing up. In addition, the monitor provides service codes and service reminders to the operators.

Along the front of the machines, there have been a few changes since the original prototypes were unveiled. One thing that stands out for Kioti customers and dealers about the company's products is their quality and durability.

"We were close when we showed them last year, but we started adding more durability elements to this,” Boerger said. “We just kind of started bolting on some stuff; we added more steel, so we've got a lot more protection up front.” More bolt-on pieces were also added to make it easier to replace a section should it get damaged.

“There's a lot of protection in steel that's built into the design of this machine, so there's a lot of robustness,” Boerger said. “Customers are very impressed with how rugged this machine looks with some of the features that we've designed into it.”

Along the sides of the machines, where often you’ll see exposed hoses, Kioti routed them to limit the possibility of snags and tucked them behind the arm for additional protection.

For service access, Boerger said, you lift the rear hatch and open the tailgate and remove a couple of bolts to swing the radiator out. “We pulled a lot of the common components you see underneath the seat or under the cab to the back of the machine,” he said. “They're easy to reach, and they're easy to service.”

Kioti has about 500 dealers throughout North America. It expects both new machines to benefit from those established relationships it has in the hobby farm and rural lifestyle markets.

Also, Boerger said, the zero-turn mowers it launched in 2019 have attracted landscape contractors. Likely, those landscapers and other contractors will be interested in the new skid steer and CTL.

"There's a lot of different things that these machines can do, they're the Swiss Army knife, I guess of equipment," he said.

As for size, that decision was based on where the sales are. In recent years, compact equipment has been getting larger, with multiple brands coming out with their biggest CTL or biggest skid steer ever.  While there is a growing market on the upper end for 90-plus-horsepower machines, Boerger said, the volume remains in the compact world.

“That's why you are seeing us start you with the 74-horsepower medium-frame loaders,” he said. “In theory, the bread and butter, the volume in the industry is still a compact.” Many customers are trying to avoid diesel exhaust fluid, which is not required if the engine is under 74 horsepower.

Although the new loaders and their related attachments have not even reached the market yet, Kioti dealers are already asking, what’s next?

"We've got a couple of projects that are already in the works," he said. "They're in the very early stages, but you can expect to see more products in this compact construction-type lineup in the future." 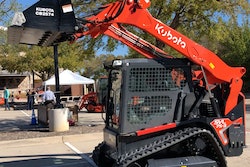