John Deere has launched the first excavators under its new Performance Tiering strategy – the mid-sized 350 P-tier and 380 P-tier. These revamped machines support on-demand safety, comfort, and control — all while delivering the power needed for high production on the job, the company says.

Upgrades on the new machines include improved front-joint durability, a redesigned hood that boosts serviceability and cooler access, and up to 7% better fuel economy. In addition, the new mid-sized models are designed to accommodate different operators with the simple flip of a lever.

“Our goal in enhancing the 350 P-tier and 380 P-tier is to address the needs of operators by creating a comfortable and technologically advanced machine that can make their job easier,” said Justin Steger, solutions marketing manager, John Deere Construction & Forestry.

Under the new tiering system, Deere is dropping the letter at the end of the model’s name that signified the machine's generation. In place of that letter is one of three letters meant to signify its performance and technology tier: a G, P or X.

Each of the letters represents a set level of features, with G as the economy model; P includes advanced features; and the X-tier denotes the company’s hybrid diesel-electric technology and most advanced features.

For the 350 and 380, the new P-tier replaces the G-Series nomenclature. On the machines, a "P" is presented under the model number. At this time, no other tier levels have been unveiled for excavators.

These grade management options allow customers to choose a level of technology that’s right for them with the ability to upgrade as their business grows, the company says.

“When you think about all OEMs, it doesn't matter the brand or color, we all try to do our best when it comes to visibility but there are just natural areas on the machine where visibility isn't the best,” Steger said.

Sitting in the operator seat of an excavator, the visibility to the front right corner of the tracks isn’t the best no matter what because of the cab and the offset boom to the side, with all that iron naturally blocking as the machine is in use. Rear visibility is also challenging, whether it’s a tall or long hood or sheet metal behind the cab, rear visibility can be a challenge.

For the 350 and 380 P-tier, visibility around the machines has been improved with the option of a right, rear and left camera system with LED surround lighting that provides enhanced 270-degree visibility and is integrated into the primary display in the cab.

“At a glance, the operator is going to be able to see their surroundings when they need it in the line of sight directly in the standard machine monitor,” Steger said. “It's really just taking one more thing off that operator’s plate.” With full knowledge of their surroundings, operators can continue being productive until they approach an obstacle.

In conjunction, when installed, the optional cameras include additional LED lighting to those on the machine, which assists in allowing operators to continue working when they want, no matter the lightning.

Combined with the expanse of front and side glass and narrow front cab posts and numerous mirrors, the machine provides clear visibility.

Focusing on operator comfort and productivity, John Deere has put some additional effort into the operator’s office, the cab.

“It's important an operator is comfortable in order to be as productive as possible throughout the day,” Steger said.

He directed attention to two areas of the cab. First, was the monitor. “It's really intuitive to navigate through the menus and adjust the machine setting,” Steger said. While not a touchscreen, the dial navigation is like what John Deere currently has on its G-series and known in the marketplace.

Next, there are three different seat options to ensure operators have the most comfortable seat for the right price to be productive. There is a standard mechanical, no frills seat. Then there's also the option of a high-back, heated, air-suspension seat; or the premium leather heated and cooled seat. Both models come standard with front LED work lights and there is an option for additional deluxe LED work lights, as well as trim packages to address cold weather and airborne debris. Designed to accommodate different operators with the simple flip of a lever, the control pattern-change valve is standard instead of a field-kit option.

Outside the cab, the two excavators are equipped with a new, larger hood design and better serviceability. Each cooler is individually removable, and access within the compartment is easier, Deere says. Four bolts and a single electrical connector make fan maintenance quick and easy.

To lower daily operating costs, the machines’ fuel economy is up 7% compared to previous models via electric on-demand cooling fans that reduce engine load, in-line after treatment for less restriction and system complexity, along with increased front piping diameter to cut down hydraulic restriction. 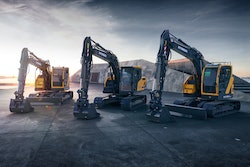 Hyundai Unveils Trio of Excavators from 13 to 15 Metric Tons 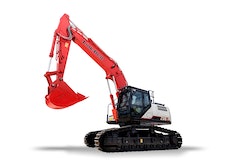 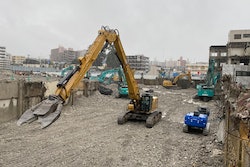