The concept HW155H is equipped with a hydrogen fuel cell-powered driveline, providing the electrical power to operate the machine with zero tailpipe emissions.

The fuel cell, which is mounted in the rear of the upper structure of the machine, generates electrical energy from a chemical reaction between the stored hydrogen and oxygen present in the air. It then converts this energy into usable electric power used to drive the hydraulic pump, to power the machine like any other.

The hydrogen is stored on the right-hand side of the machine, opposite the operator’s cab, in high-pressure tanks. Water is the only emission released from the fuel cell stack.

Hyundai Construction Equipment has been developing the technology since 2020, when it signed a Memorandum of Understanding with Hyundai Motors and Hyundai Mobis, at its Mabuk Research Centre in Yongin-si, Gyeonggi-do. The three companies are working in concert to develop hydrogen fuel cells to power forklifts and medium/large excavators, with Hyundai previously citing 2023 as a mass production and distribution target deadline.

The technology is already in use in Hyundai’s Nexo fuel cell passenger car. The car uses Hyundai Motors’ second-generation fuel cell, which is smaller, lighter and stronger than the original seen in the ix35 car, Hyundai says.

With fuel consumption of 2 pounds of H2 per 62 miles driven, the Nexo has a driving range of up to 413 miles. According to the Alternative Fuels Data Center, the energy in 2.2 pounds of hydrogen gas is about the same as the energy in 1 gallon of gasoline. Like its diesel-powered counterparts, refueling takes a matter of minutes, rather than the hours required to recharge a full-battery electric vehicle.

Hyundai says the transfer of technology to the construction equipment market will enable the company to deliver the power and performance that a contractor requires, with zero on-site emissions. When hydrogen is produced using renewable energy, such as off-shore wind, it creates a very low-carbon powertrain.

“The development of the first excavator powered by hydrogen is very exciting, as we work towards a carbon-free world,” said Gert Peeters, product manager at Hyundai CE Europe.

“Over the coming months, HCE will continue to develop and further refine this technology and thereby pursue our goal to lead the transition into a zero-carbon future. While great progress has already been made in the development of electric vehicle technology, there is a risk that we overlook hydrogen as a practical, immediate solution to reduce emissions and improve air quality.

“Our projections show that fuel-powered vehicles will be more cost-effective than battery-electric or diesel-powered vehicles in the future. We at Hyundai Construction Equipment are convinced that hydrogen will be at the forefront of renewable energies in the long term. We want to exploit this potential and make it available to users in practice-oriented solutions.” 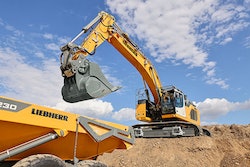 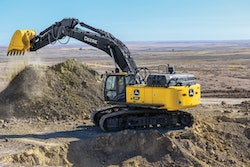 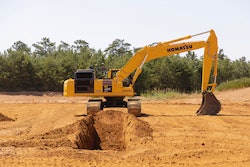