A clean-sheet redesign, better performance, better durability and more comfort. With the new R-Series, Bobcat says it has built the best compact loaders ever.

During a media event at its new dealer training facility near Denver, Bobcat unveiled the first two R-Series models in the S76 skid-steer loader and the T76 compact track loader.

Bobcat says the headline feature on these new loaders, which will be available in early 2020, is their toughness. The company says the brand new design on these machines not only looks tough, but actually represents the most durable and rugged compact loader series they’ve ever built.

The new loader arms are on these R-Series machines are built with cast steel. During manufacturing, the corners of the new arms can now be formed without the need for additional fabricated plates that can block visibility to the ground. Not only is this cast steel design 20-percent stronger than the former fabricated steel design, product manager Jorge De Hoyos says it also allowed Bobcat to slim up the profile of the machine and put more material where it was needed.

Plus, the linkage of these new lift arms is no longer located below the arms themselves and is instead located in the back of the machine, further enhancing visibility.

Even the tilt cylinders have been updated, now with no hoses or tubes requiring skid plates for protection, which means—you guessed it—more visibility to the implement.

Bobcat says the design of the machines also improves lift capacity throughout the loaders’ range of motion. You can also expect higher lifts capacities thorough the lift cycle, including at full reach. Extra lift height on these new models enables dumping into high-sided dump trucks and hoppers.

On the compact track loader models, another new feature is the more stable five-link torsion suspension that has now completely replaced the roller suspension found on past models. Bobcat says it has also managed to get more of these tracks on the ground—two inches to be exact.

The company also increased the wheel base on the skid steer models. The S76, which replaces the S650, will have a 48-inch wheelbase compared to the S650’s 45 inches.

Alongside these loaders, Bobcat is launching a new heavy duty bucket with roll back. The buckets feature a waffle skid underneath for increased rigidity, and bolt-on cutting edges are standard for better soil shaping.

Bobcat has also redesigned the cooling package on its new compact loaders in response to greater demand for higher capacity cooling. The company says this new cooling package is 50 percent larger than the one found on its M-Series loaders.

“To do this we had to change our cooling pattern and change our cooling components,” De Hoyos says. “So instead of drawing the air from the top and blowing it out through the sides, we said we needed to air wash both sides of the engine, not just one.” The new design, which surrounds a new Bobcat inline engine, draws air from the back and blows it out of the top of the machine. A reversing fan is an available option for blowing out debris.

The cooling package has also been moved further away from the cab which further decreased cab noise.

Inside the cab of the new R-Series machines, operators will find a quieter work environment thanks to the new one-piece cab design that is better sealed and pressurized than previous models. You’ll also find keyless start standard, a heated air-ride seat and a 5-inch display or the new optional 7-inch Bobcat Touch display. The touch display gives operators access to detailed machine information. And can be navigated with touch or jog dial. The touchscreen is waterproof, can be used with gloves and and has is scratch resistant.

A new clear-side cab is an available option for a big increase in visibility to the tracks or wheels of the machine. De Hoyos says when you order this clear-side cab you get automatic heat and air conditioning. And though this cab option has more glass, Bobcat says it’s still highly protective of the operator with 4,000 psi polycarbonate reinforcement to guard against outside impacts.

And while steering is still manual, Bobcat has added electric pedals. “It allows us to has some design capability and introduce something called dual direction bucket positioning,” De Hoyos explains. “So now you can go up level and come down level.”

Atop the cab is a new LED lighting system. The design of these new lights allow the light to wrap around the corners of the machine for better visibility at night. With the optional side lights, Bobcat says the R-Series machines can provide 180 degrees of visibility at night. 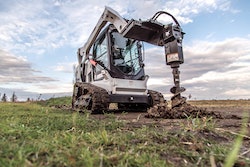 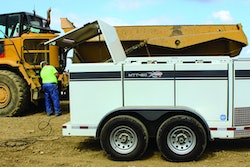 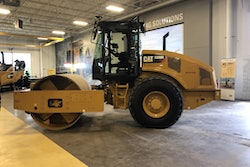