Construction firms added 16,000 jobs in August but remain stymied by a dearth of qualified workers, according to the latest federal statistics.

“After several months of declining labor force participation, the rate of participation expanded meaningfully in August,” said Anirban Basu, ABC chief economist. “It is surprising that the labor force had not been increasing since March because presumably elevated inflation would require more people to work in order to pay bills.”

He notes that perhaps the elevated inflation, along with higher wages, is what drove the rise in labor force participation from 62.1% to 62.4%. However, Basu also pointed out that beneath the headline numbers, severe labor market conditions persist.

“Nonresidential construction activity is growing, but contractors universally report difficulty hiring as many workers as they need,” said Ken Simonson, AGC chief economist. “With the industry unemployment rate hovering below 4%, finding qualified applicants is sure to remain a major challenge.”

Nonresidential construction employment rose by 4,300 positions on net, with growth in two of three subcategories. Gains of 700 jobs at general building contractors and 5,600 at nonresidential specialty trade contractors offset a loss of 2,000 at heavy and civil engineering construction firms.

Employment in residential construction – homebuilders, multifamily general contractors, and residential specialty trade contractors – increased by 10,900 in August. Between August 2021 and August 2022, residential firms have added 118,700 jobs, an increase of 4%.

The unemployment rate among jobseekers with construction experience fell from 4.6 % in August 2021 to 3.9% in August 2022, Simonson noted. Unemployment across all industries expanded from 3.5% in July to 3.7%.

“This jobs report represents good news for contractors,” Basu said. “The rise in the overall unemployment rate from 3.5% to 3.7% and the expansion in construction worker unemployment from 3.5% to 3.9% means that the labor market has loosened a bit.”

Also, he said there was evidence that compensation growth is slowing, which is relief to contractors who have become increasingly pessimistic about their profit margins.

“While this will not alter the Federal Reserve’s present posture of raising interest rates, the process of labor market normalization appears to be underway,” Basu said.

Simonson said the low unemployment rate is consistent with the association’s recent survey, which found that 93% of responding firms had open positions. Of those firms, 91% report having a hard time filling hourly craft positions, he added.

AGC officials noted that one of the main causes of workforce shortages is the fact that few people are being exposed to the opportunities available in the industry and lack basic, essential skills. Seventy-seven percent of contractors report there are few workers available that meet the minimum qualification standards, including being able to pass a drug test, which is something insurance companies require for all workers in the industry.

“Public officials need to boost funding for construction-focused training programs to expose more workers to the opportunities that exist in the industry,” Simonson added. “The industry has the work; it just needs the workers.” 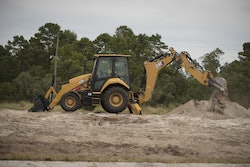 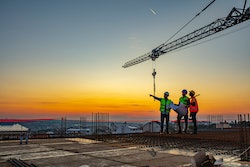 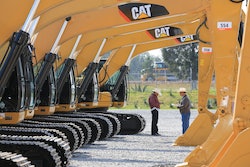