As a self-contained power source that gets its energy from a Volta lithium-ion battery pack, the HPS can run the truck’s crane and the company’s new 30-P electrically driven air compressor without the need for the truck’s engine to be on and the PTO running.

“We are electrifying everything behind the cab,” says Tim Davison, Product Manager at Stellar Industries.

At 225 pounds, the compressor is suitable for a work truck or van where higher air consumption and a small footprint are preferred. The 30-P air compressor produces a maximum air output of 30 cfm and up to 150 psi. A heavy-duty crankshaft ensures smooth operation and long life, and stainless steel reed valves add heat resistance and longevity. Maintenance points are accessed via a flip-top lid.

The American Eagle HPS is both self-charging and charge-able through an electric cord.

“When you are driving between jobs you can charge the battery off the alternator. The alternator is a fast charge that gives you a charging rate of one percent per mile up to 80 percent,” says Davison. “Evenings or at a jobsite where there is electricity we have a 110-volt outlet that you can plug into.” Commonly known as shore power, this is a slow charge technology that will take the battery pack from zero to 100 percent charged in about nine hours.

They system also routes 110-volt, pure sine electrical power to 3 different outlets, one in the back, one in the front and one in the cab. So you can run a grinder or diagnostics equipment, battery packs for power tools, laptops or a ceramic heater. Pure sine power is important to protect laptops and other electronics from damaging voltage spikes.

“In the mobile application world 48 volts is considered low voltage,” says Davison. “Sixty volts and above is considered high voltage and you have to have decals on the vehicles. If you get into an accident, fire department has to know about it.” Also mine sites will typically require some certification or authorization to operate a high voltage vehicle on their sites.

The hybrid solution is more expensive than a traditional engine and PTO-driven system says Davison. But it can prove valuable in urban environments where noise or air pollution is a concern. And it also reduces fuel consumption, engine wear, hoses, belts and maintenance over time. 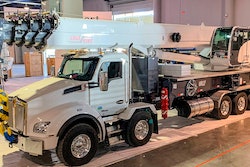 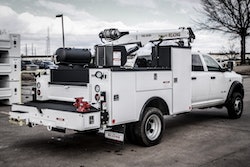 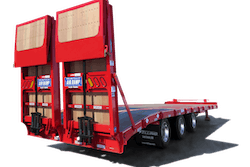