Editor’s Note: This post recounts the experience of a unique heavy haul job carried out by customers of Kenworth trucks and was provided by Kenworth.

It’s like a plot for a superhero movie. Boss comes into the shop one day and says:

“Boys, I got a big job for you. A heavy haul. One-million pounds”

That’s the load and the official weight of a job taken on by Omega Morgan, a Hillsboro, Oregon, company that specializes in heavy rigging and transportation. The job consisted of hauling a 460,000 pound transformer using a gargantuan 360-foot trailer and 48 axles weighing 484,000 pounds. The route covered 47 miles from a rail head to the Bonneville Power Administration Rock Creek Subdivision in two days.

To move this record breaking load, Omega Morgan used three heavy-haul trucks, a Kenworth C500 as the lead (pull) truck, and two Kenworth T800 trucks to push. The muscle behind the C500 was a 550 horsepower engine with an Allison 4700 RDS seven-speed automatic transmission and a four speed air shift auxiliary transmission.

Underneath the load and trailer, a Sisu planetary tridem axle rated at 105,000 pounds and a 22,000 pound front axle with 24,000-pound front slipper springs steadied the load on a triple rail steel frame with a 200,000 pound gross combination weight chassis rating. Omega Morton build its own 360 foot trailer.

Although the route was short, the company had to widen the gravel road at the railhead from 16 to 20 feet and reduce the grade from 16 percent to 15 percent. While there was plenty of horsepower available to move the load, engineers were concerned about traction on that 15 percent grade. So the company added a fourth heavy haul truck, loaded with concrete blocks, tethered to the Kenworth C500. The two Kenworths in back were connected through a 10 foot A-frame to generate power while the C500 and block hauler were connected through a steel cable.

Back on the pavement, the three trucks took over but had to deftly negotiate several turns that were sharper than 90 degrees and a 20 foot-wide road that left only a foot on either side of the load for clearance. Hydraulic dollies were used to spread the weight out on bridges.

The job went off without a hitch and according to the Seattle Times, made the record book for the heaviest haul in the state. It also came with a superhero’s payoff for Omega Morgan at $8,500 per mile. 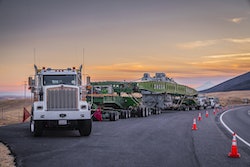 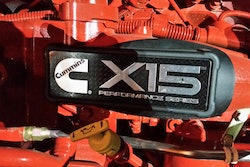 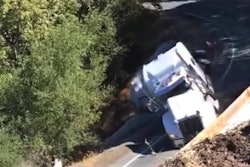