Toyo Tire U.S.A. is taking aim at jobsite pickups nationwide with its newest offering—a new commercial grade tire for half-ton and one-tons the company added to its Open County tire line this summer.

I mounted a set of Open Country C/T (245/70R17) provided by Toyo in September—barely a month after their debut—to my F-150 for an extended test.

The Open Country C/T (commercial traction) is an on-/off-road tire that features all-terrain commercial-grade durability plus a Three-Peak Mountain Snowflake, which qualifies it for severe snow conditions. I won’t get much use out of that last feature thanks to historically mild Alabama winters, but I’m confident in the tires’ ability should Mother Nature go completely insane in the months ahead.

Despite their aggressive appearance, thus far the Open Country C/T has surprisingly good on-road manners—a mostly quiet and comfortable ride at highway speeds. The tread compound contains high levels of natural rubber and was specifically designed for rough roads and no roads, both of which are ample in rural Alabama. Natural rubber also offers cut and chip resistance and long tread life, and the sidewall compound also offers exceptional bruise and cut/chip resistance.

The Open Country C/T tires share some similarities with its Open Country A/T cousin, but Todd Bergeson, senior product manager for Toyo Tire U.S.A. Corp., says several components of the C/T have been engineered for heavy duty commercial-grade use.

The three-ply construction helps resist cutting, chipping and stone drilling while remaining flexible in lower temperatures. The tread design also adds to the durability of the Open Country C/T. Key features include dual-angle shoulder blocks which improve traction in snow, mud and rutted roads.  The tread is also pinned to accept TSMI #15 studs to aid traction on ice. Despite its Three-Peak Mountain Snowflake rating, the C/T is an all-weather, all the time tire.

With its Open Country C/T, Toyo is targeting full size pickup owners in construction trades like job site foreman, lineman and contractors that “require a tire to perform in both on and off-road (jobsite) commercial applications on a daily basis, including hauling and towing,” Bergeson says.

“This commercial grade all-terrain tire is ready to tackle gravel, mud and even severe snow conditions with its three-peak mountain snowflake designation,” he adds. “If your truck is your office too, it has to be dependable but might as well be comfortable and quiet, too.”

With just more than 2,000 miles on my test set, early impressions are positive. The tires have provided superior traction on varied surfaces and a quiet responsive ride. Alabama is currently in the throws of a drought, so muddy condition testing has been limited. However, I’ve found traction and ride quality to be exceptional on paved and un-paved surfaces, worksites and some of backroad-Alabama’s finest pig trails.

If you can drive on it (legally), this tire can tackle it.

Since it’s a commercial tire, the Open Country C/T doesn’t come with a mileage warranty but I measured about 18/32nds of tread off the rack. That’s down to about 17/32ds after the first 2,000 miles.

Tread depth varies depending on the tire size, but Bergeson says the tires do come with the Toyo’s No Regrets Trial Offer, giving owners 45 days or 500 miles (whichever comes first) to be sure they are satisfied with their tire choice.

This post will be updated throughout the extended test period. 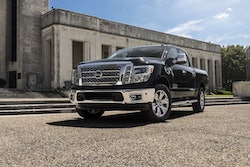 Nissan unveils the Texas Titan, a chromed-out package for its new pickups 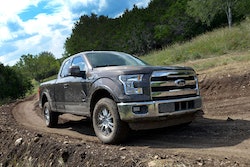 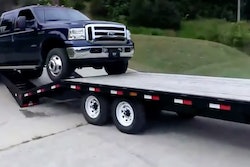