When GM set out to design the 3.0-liter Duramax diesel, the automaker wanted to create a no-compromise engine, says John Barta, assistant chief engineer and the team lead on the new engine.

What Barta and team have delivered is pretty close. After a few hours driving both a GMC Sierra 1500 Denali and a Sierra 1500 AT4 equipped with the engine through the Rocky Mountains near Jackson, Wyoming, this engine would be at the top of my list when it comes to available options for GMC’s light duty pickup.

With the 3L Duramax, GM has delivered a low-noise, high-mpg engine that, while not the most powerful (depending on what you consider a true measurement of power, more on that in a bit), can pull quite a lot with a lot of confidence.

Before we get into the drive, let’s recap a bit. The new 3L Duramax is the first inline-six turbo diesel GM has ever offered in half-ton truck. Fuel economy is an estimated 23 mpg city, 30 mpg highway, and 26 mpg combined. The engine produces 277 horsepower and 460 lb-ft of torque. That peak horsepower, which doesn’t kick in until 3,750 rpm, is just enough to give GM the nod for most power in a light duty diesel engine, edging out Ram’s 260 hp produced by the new and improved 3L EcoDiesel.

However, the EcoDiesel delivers 480 lb-ft, enough for Ram to make claim to most torque in the segment.

GM first announced the 3L Duramax way back in January 2018 and it was initially planned to be available on 2019 light duty truck models. That never materialized due to what Barta said were early supplier issues that disrupted manufacturing of the engine. The supplier issues were followed closely by further delays caused by difficulties with clearing emissions tests.

The delays mounted up, Barta says, and rather than tack the engine on as the 2019 models were being sunsetted, GM chose to simply formally introduce the engine for 2020.

Now that history is out of the way, let’s talk driving. My first experience with this engine came with a short—and I do mean short—off-road obstacle loop in a 2020 Sierra 1500 AT4 equipped with the 3L Duramax.

The first obstacle in the course was a steep mound covered in large rocks. On the way up and down, I got a chance to try out the Hill Start Assist and Hill Descent Control features, respectively, included with the AT4 trim. Nearing the peak of the rocky summit, I brought the truck to a stop with the brake pedal and after a second let off. Hill Start Assist did it’s job, keeping us from flying back down the 30-40-degree incline. After cresting, I moved forward, dropping the nose of the truck toward a tunnel of sorts dug out of the ground and covered by several cut and stripped trees. I stopped the truck and again let off the brake. Again, no movement thanks to Hill Descent Control. I gently pressed the accelerator to get the truck moving again and within a second or two, the truck regained momentum and sank down into the tunnel.

It was a nice demo on a large rock feature, sure, but it’s also something that will put you a bit more at ease when towing as well. Another comforting feature is the view of the trail in front of you from the dash of the AT4 thanks to a camera mounted on the front end of the truck. It makes keeping your lines on the trail much easier.

As far as climbing the hill went, the truck handled it with little trouble and with no touchiness in the accelerator. The AT4 has a Traction Select System with a dedicated off-road mode (Tour, Sport and Tow/Haul are the others.) A twist of the knob into off-road mode, and a button press to put the truck into 4LO and you can throw quite a bit at the Sierra 1500 AT4 and it won’t blink.

The AT4 also brings a 2-inch lift kit, Rancho shocks, an automatic locking rear diff, 18-inch wheels (20 optional) and extra skid plates. And when you add in the eye-opening pep off the line and the additional torque that the 3L Duramax brings to the table, it all amounts to a truck that is very fun to drive through mud and gravel.

After emerging from the muddy obstacle course, I hopped into a slightly cleaner AT4 Duramax and was able to run the truck through a quick track cut into a grass field with some gentle hills. Due to the size of this loop, I was never able to safely get the truck up to more than 40 mph, but I did notice the grip of the optional Goodyear Duratrac tires and the confidence in the truck’s stance while taking a few tight corners at speed.

But the biggest takeaway from the quick trip was the pep in this 3L engine’s step. With this engine, the AT4 really jumps off the line. And thanks to the 10-speed transmission, shifting between gears is nearly indiscernible.

Bottom line, if you’re going to go with the AT4 package and you’re planning on actually taking that truck off-road, give the 3L Duramax option some serious thought. The engine feels so much at home with that package that it would make sense if it was the default engine choice for that trim.

My last run with the 3L Duramax was in a Sierra 1500 Denali pulling a box trailer loaded down to around 8,000 pounds.

While 8,000 pounds might be a number the Sierra HD trucks, the 6.6L Duramax and its mammoth 900 lb-ft of torque sneer at, that trailer represents nearly 90 percent of the Sierra 1500’s towing capacity when equipped with the 3L diesel. And when you throw in mountainous terrain and a 6-percent grade, you should end up with a pretty solid idea of just what this engine can handle when it comes to pulling stuff.

I was accompanied on the towing test by Barta, who said his design team worked hard during the engine’s four-year development cycle to optimize the run from the air intake all the way into the engine cylinder. Barta says the cooling technology on the 3L Duramax can drop engine temperatures by as much as 100 degrees Celsius.

“It’s a very short distance into our turbo, and the turbo can boost up to 29 psi right into the the intake manifold. By virtue of the clean sheet design that we had to work with, we’re able to get that short column of air boosted much quicker than an engine that has longer runners from the turbo into the intake,” Barta says. He adds that the inline-six design helps in that regard as well because the “further separation of two banks in a V6 (make it) naturally more difficult to get boosting as quick to the cylinder than you’d like.”

Even loaded down, the 3L Duramax provides a relatively quick jump off the line thanks to the engine’s 460 lb-ft of torque. The big benefit of towing with this engine though is the exhaust braking. Unlike the exhaust braking found on GM’s heavy duty trucks, the implementation on the light duty Sierra is integrated with the truck’s tow/haul mode and can not be switched on and off independently of that mode.

The truck pulled the trailer effortlessly. By the time we encountered that 6-percent grade, the truck had gained a head of steam and was cruising at around 50 mph. I leaned into the accelerator to push the truck to 55 mph and watched as the rpms climbed. We cruised with little effort all the way up the hill. It wasn’t until around 3,500 rpm that the truck shifted gears, and by then we had reached the crest of the grade.

“Our torque band and horsepower give a great driving experience because we give torque throughout almost the entire rpm band,” Barta says. “We hit our max peak torque at 1,500 rpms at 460 lb-ft. And then the torque curve is nearly flat almost to 3100 rpm and then drops off and then at 3,750 rpm we hit our peak horsepower.”

Our run up the steep grade with 8,000 pounds in tow bore out Barta’s claim. And it’s that torque band that Barta says sets the 3L Duramax apart from the 3L EcoDiesel inside the Ram 1500, despite that engine’s higher peak torque.

“Our competitors at Ram have done a great job at getting 480 lb-ft of torque at 1,600 rpms but their torque curve drops off and rolls lower than that as the rpms rise. Therefore, their peak horsepower isn’t as much and I think that torque curves can predict very well how your driving experience is going to be,” he says. “The area under the torque curve and the horsepower can tell you how your driving experience is going to be. And if you compare those two, we have an advantage over Ram for the entire driving range or rpm band.”

In fact, Barta says that the engine is probably capable of an even higher tow rating. But given that 95 percent of GMC’s light duty pickup customers don’t tow more than 9,000 pounds, Barta says the tow rating is just right. He says those customers that want or need to tow trailers north of 10,000 pounds are predominantly interested in a heavy duty truck.

“It really boils down to a chassis. When you get to towing [more than 9,000 pounds], you need weight in your chassis,” Barta says. “You need the strength from your springs and everything from the tires and the bearings. A light duty truck is not designed to tow a 15,000 pounds trailer. And they shouldn’t be.”

Priced identically to the 6.2L V8 and $2,495 over the 5.3L V8, the 3L Duramax turbo diesel is an extremely attractive new option for GMC buyers. There are three types of folks that I think should give this engine strong consideration:

1. Those that favor fuel economy.
2. Those interested in the AT4 trim and need an off-road capable truck.
3. Those who will be towing with any kind of regularity.

In fact, if you fall into two of those three categories, the 3L Duramax is a must. It adds a dimension of capability, comfort and confidence to GMC’s light duty offering that previously wasn’t there. 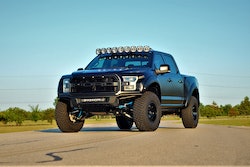 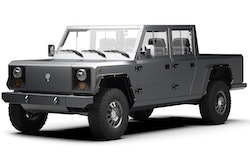 Bollinger B2 will be the first electric Class 3 truck 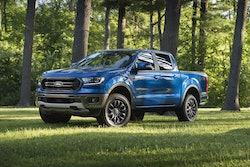