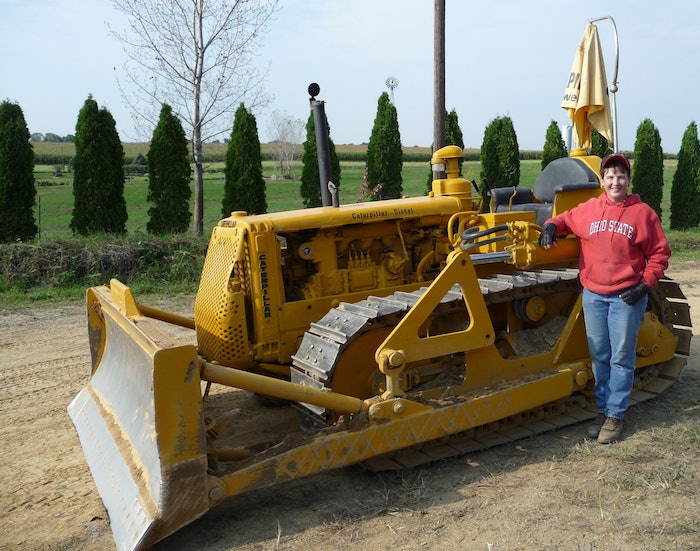 Nancy McDonnell had been watching her husband, David, and others operating vintage construction equipment at antique machine shows, and she decided it was time she had a turn.

After a local search in the late 1990s, the Germantown, Ohio, couple found a 1956 Caterpillar D4 dozer. It was in rough shape, so they looked at another D4 of the same era. It also had problems.

And that’s how she got her first piece of construction equipment.

“At that point, I’d never been on one before,” she says. “So I had no idea what this was going to be like to operate.”

The couple spent most evenings after work for several weeks restoring the 1956 D4 while using parts from the other one. It was also the first time she had worked on construction equipment.

One memory stands out of replacing the grousers. David wanted to keep the chains. He hoisted the tracks with a backhoe and gave Nancy a blow torch.

“I cut the bolts with a torch and then whacked them out with a sledgehammer and got all the plates off,” she recalls, “and then helped him bolt the new plates on.” 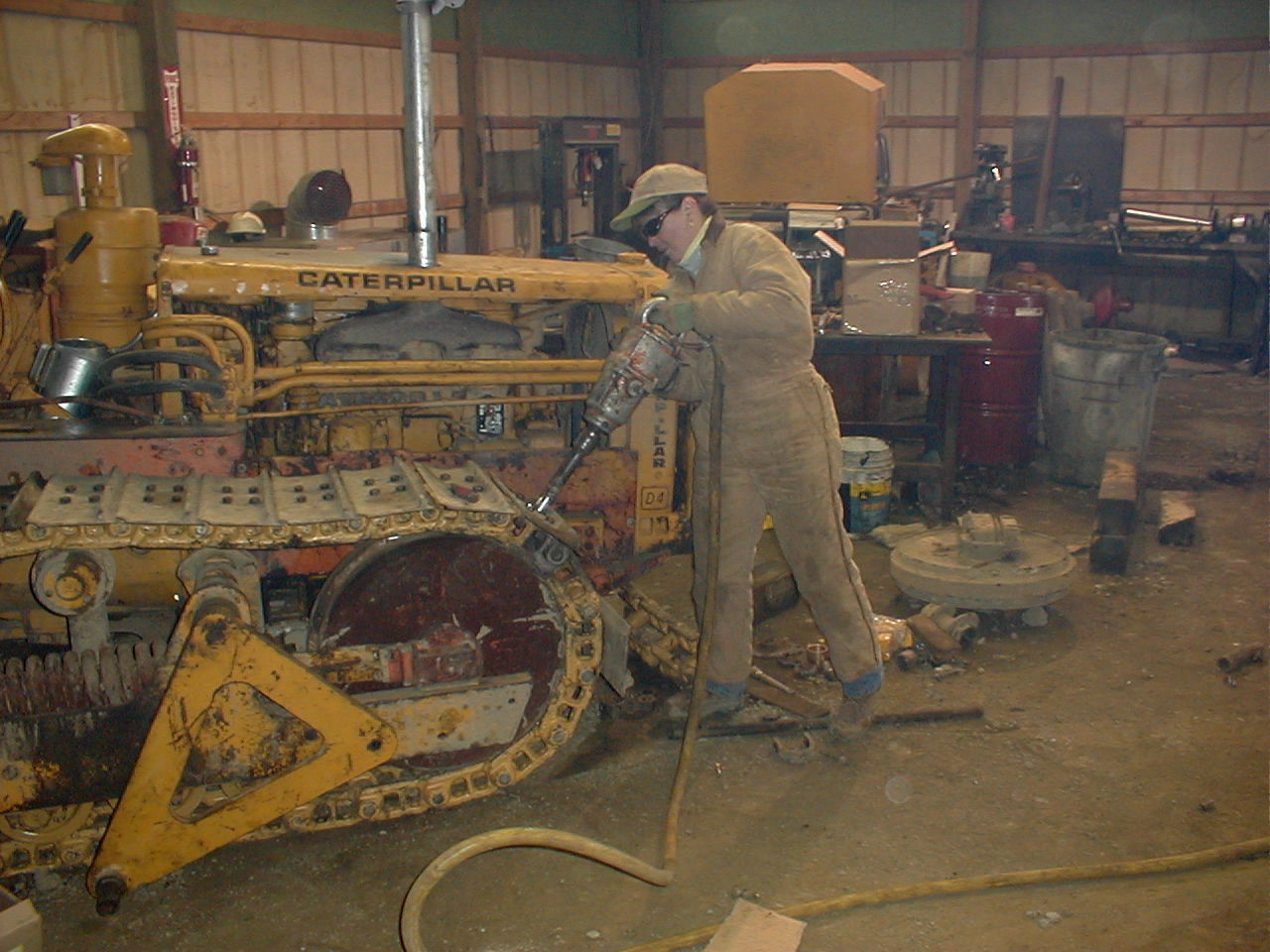 Nancy McDonnell works on restoring her 1956 Cat D4. She learned to operate the D4 at the several antique shows the couple would travel to each year, also bringing their 1961 Mack B61 dump truck.

“It took me quite a while to learn how, just doing it a few weekends a year,” she says. “But I did figure it out. Every time I got a little better at it.”

Her favorite task is moving the dirt for the old crawler cranes to use to load the trucks. Her skills as an operator have also been noticed by the men – she’s usually the only female operator. She remembers being asked to help clean up around a crawler crane at one show. “It made me feel good that all these guys had enough confidence in my ability to operate the machine that they would ask me to do something for them,” she says. 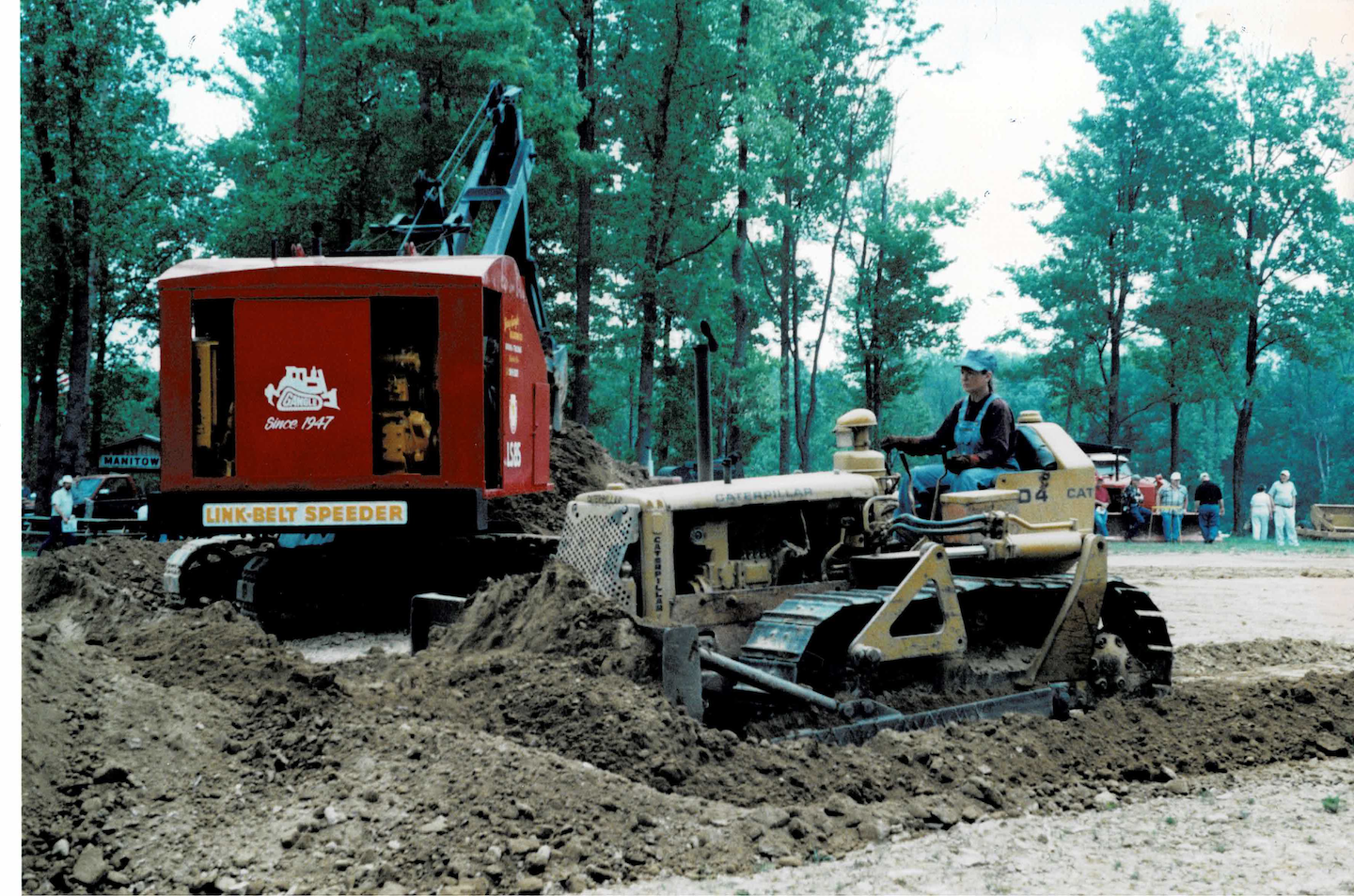 Nancy McDonnell pushes dirt for a crawler crane at an antique construction equipment show.Many at the shows are also impressed with her ability to start the D4 with the pony motor. The small gas engine is used to start the dozer’s larger diesel engine. It involves multiple steps and can be a frustrating process.

“It had a little bit of trouble at times,” she says. “And my husband used to threaten that if it died, he was going to put an electric starter on it.

Since restoring the D4 in the late 1990s, Nancy has retired from her job as an environmental manager for a paper mill. David passed away in 2017. She has sold some of the couple’s larger pieces but still has the D4 and a Northwest Model 25 crawler crane. She continues to service them, having had to learn to do more of her own maintenance. She also still loves the opportunity to get back on the D4.

“I don’t even mind in the middle of August when it’s hot and humid,” she says. “When I’m on it, I’m paying attention to what I’m doing. And I don’t realize how hot I am until I stop.”

Editor’s note: Collector’s Corner is an ongoing series of articles by Equipment World in which collectors of antique construction equipment and construction models talk about their favorite finds. If you’ve got a special piece of vintage equipment or a model you’d like featured, email Don McLoud at DonMcLoud@randallreily.com.