Technician of the Year: “If Something Breaks Down … I'm All Over It.”

For winning the 2021 AEMP Technician of the Year Award, Chase Snyder received this custom-built toolbox from John Deere, which has sponsored the award for more than 30 years.
Courtesy of Manatee County

As a child, Chase Snyder was fascinated with construction equipment.

He would watch the “There Goes a Truck” series over and over on the VCR, especially the episodes that focused on heavy equipment.

That love of equipment has stuck with Snyder. Now, he’s 26 and each day he’s working on big diesel machines as senior fleet technician for the Manatee County, Florida landfill. The bigger, the dirtier, the more challenging the job – the better.

“I prefer the landfill stuff,” Snyder says, when asked about his favorite equipment to work on. “A lot of people think that’s weird when I say that, because it's typically the dirtiest, the nastiest. When you've got to go and clean them and crawl up in the belly pans, you never know what you're going to encounter.

“But it doesn't deter me. I just find it interesting what the machines are able to do.”

That attitude, his professionalism, his ability to save money by handling repairs in-house and his commitment to training have earned Snyder the top honor in his profession – the 2021 Technician of the Year Award by the Association of Equipment Management Professionals’ Education Foundation.

Growing up, Snyder fed his love of equipment by visiting his grandfather’s construction business. As he got older, he would also spend time with his other grandfather, who was a technician at a Ford dealership, restoring 1950s-era Fords. “I'd always be out there watching him and trying to help him tinker,” Snyder says.

In high school, he decided being a heavy-diesel technician was what he wanted to do. He saved up to buy a diesel pickup truck he could work on to prepare for his future career.

“When you're younger and don't have a lot of money, you’ve got to learn how to make stuff run and learn how things work, because you can't have somebody fix it for you,” he says.

He learned mechanical repair on his truck by trial and error. He also got a job at a farm while in high school and performed basic maintenance on tractors.

When it came time for college, he got his associates degree. After that, he broke with family tradition of getting a four-year college degree and instead went to trade school.

“I wanted to get into heavy diesel just because I found it interesting,” he recalls. “But I had to go to school at night, because I was working full time during the day, and there's no diesel program within an hour and a half drive of where I was living at the time. So I went at night for general automotive.”

While attending Manatee Technical College, he tried to work as a technician for some construction companies, but he didn’t have the diesel experience. But he was able to land a job with Sarasota County working on transit buses. He learned a lot to help him in his career. One longtime worker there was particularly generous with his knowledge.

“Luckily he took me under his wing and taught me a lot of some of the older-school tricks that still are relevant,” he says.

After graduation, he started working for Manatee County. At last, he was with the yellow iron he loved so much. The county has a 170-piece fleet, including heavy dozers, wheel loaders, excavators and massive landfill compactors.

His supervisor at the county landfill shop, David Alligood, won last year’s AEMP Technician of the Year Award. Snyder did not know Alligood before he came to work for Manatee County, but he had heard of him. When looking for work while in tech school, Snyder met the fleet manager for Sarasota County, who had also worked at Manatee County.

“And I met with him and he laughed, and he goes, ‘You remind me of this guy David that I hired about 10 years ago,’” Snyder recalls.

When he went to the job interview for Manatee County, Alligood was in the room.

“There were four or five of us in that room,” remembers Alligood. “And when he walked out, we all looked at each other. We're like, ‘That's probably the best interview we've ever had.’”

“I couldn't believe it,” Alligood adds. “He was a dead ringer.”

Snyder has worked in Manatee County’s landfill shop for about three years and has already made an impact.

He’s a quick learner and willing to tackle the tough jobs, say coworkers.

“I love the big equipment, the nasty equipment,” he says. “If something breaks down in the field or up in the trash, I'm all over it.”

They also appreciate his calm demeanor and willingness to offer new ideas and solutions.

When the landfill’s 19-ton wheel loaders’ center pins began to wear out, he convinced management to do the work in-house rather than farm it out.

“And I think we came in roughly 50% of what the quote was to have the vendor do it,” Snyder says. “Since then we've done three, and every time we get a little bit faster at it and save a little bit more money.”

Another accomplishment came when the pin bores on the blades of the landfill’s 40-ton dozers were wearing out. Working with the parts department, they found some replacement bearings that fit. A diagram was made of the parts numbers to keep on file for future repairs.

“It saved us a lot of costs and machine work,” he says. “…And also it's going to save future downtime.”

Norman Hagel, Manatee County fleet operations chief, recalled another cost-saving project, due to Snyder’s welding and fabrication skills. The county had a 10-ton trailer that Snyder converted for use as a spreader in summer and as a transporter during winter.

“His diverse skillset has saved us money on multiple occasions,” Hagel says.

At 26, Snyder is the youngest member of the landfill shop team. He’s grateful for the experienced people he’s worked with who have passed along their knowledge. He tries to return the favor by taking on some of the heavier, dirtier work.

“They've done their time of doing all that work, and so if I'm able and willing to take on some of the grunt work from them, they pay it back by educating me,” he says. “So it's a mutual respect there.”

He also makes a point of keeping up with the rapid technological advancements on the machinery. He recalls some advice he got early on when he was getting frustrated while working on a bus' diesel exhaust fluid system. He let out a common grumble he had heard from the older techs about the new diesel emission systems. One of the veteran technicians chuckled.

“Look,” he told Snyder. “I've learned enough to get by till I retire next year. You're still pretty new in the industry, and this is your reality. So you either learn to figure this stuff out, or you go find another career path, because it's not going away.”

“And that stuck with me,” Snyder says.

“This field has changed so much in the last 10 to 15 years. And I've kind of been brought into it as this wave of updating and new technology has come out. And it's only going to continue from here.”

But that change is fine with Snyder.

“The running joke I always say is you’ve got to be smarter than what you're working on. And with how technical some of this stuff's getting now, it's hard to do that some days. But it's always a challenge, and the challenges are what keep you interested. They're what keep you up at night and keep you motivated to come in the next day to figure it out.”

Snyder believes that one way the diesel tech industry can help put a dent in its labor shortage is to help the younger generations stay trained and headed toward career advancement.

“A big thing that a lot of the younger guys look for, that I know I look for a lot, is what type of training am I going to get,” he says. “That way I can stay current and learn this new stuff.”

Manatee County has done a good job of offering and emphasizing training, as well as providing updated software and access to manufacturers’ information, he says. He has earned about 25 ASE certifications.

He offers this advice for young people starting a career as a diesel technician:

“Keep your head up, and eventually, some of the right doors will open up. I know that's what happened with me. … If you work hard enough and push hard enough, things have to fall into place eventually.”

As for himself, Snyder definitely has an eye to the future. 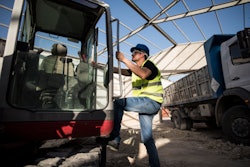 How to Solve the Construction Labor Shortage