This story was update September 27, 2022, with updated OSHA penalties.

A 47-year-old worker died on a large toll-road project in Florida after being struck in the chest by a concrete pile that broke free from a crane, according to the U.S. Occupational Safety & Health Administration.

The worker was allowed to work in the crane’s load danger zone when he was struck October 6, 2021, on the Pinellas Gateway Expressway project in Clearwater, OSHA said.

He was an employee of Archer Western-De Moya JV II, a joint-venture contractor building two new elevated toll roads between U.S. 19 and I-275. The contractor venture faced proposed penalties of $60,084, issued April 4 by OSHA, which were later negotiated to $42,474.

According to OSHA, three employees were inside a trench box cutting concrete piles to build footers for elevated lanes. They were cutting the piles with gas-powered chop saws when a pile broke free and struck the worker in the chest and pinned him against the wall, the agency says.

The crane operator used the crane to pull the load sideways, and the tie wire looped around the pile broke, OSHA determined.

The citation also said that the operator and signal person had not agreed upon nonstandard hand signals to be used before lifting the concrete pile.

The contractor did not provide training to recognize and avoid unsafe conditions, and the wire rope sling’s permanent tags containing capacity information were damaged, according to OSHA.

In all, the company received four serious violations for total proposed penalties of $42,474. Serious penalties are those in which the workplace hazard could cause an accident that would most likely cause death or harm, unless the employer did not know or could not have known of the violation.

The joint-venture contractor consists of The Walsh Group of Chicago, its subsidiary Archer Western of Atlanta, and The De Moya Group Inc. of Miami.

The incident could have been prevented if the contractor “had taken the necessary steps to identify and mitigate safety hazards,” said OSHA Area Office Director Danelle Jindra in Tampa.

The $600 million Gateway Expressway project includes a new four-lane tolled expressway connecting U.S. 19 and I-275, and a new four-lane elevated tollway from the Bayside Bridge to I-275, according to the Florida Department of Transportation. I-275 will also be widened to add a toll lane in each direction. Work began in 2017 and is expected to be completed early next year. 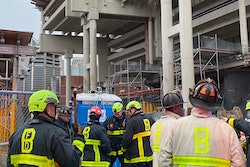 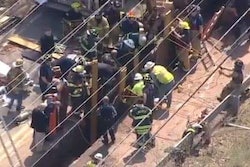